Driving Home For Christmas - In Circles... by Wiggiatlarge

A recent excursion onto our new but flawed Northern Distributor Road reminded me of the inadequacies of the Highways Department and planning, this built on the cheap, not in a monetarist way I might add - after all this country specialises in overpriced and late infrastructure - but in the final delivered article.

All junctions are roundabouts even when it is obvious a flyover was the answer, but we don’t do flyovers and tunnels as they are too costly despite the fact our near continental neighbours would not dream of building a decent road without either.

The first thing you notice when entering the roundabouts, and they are all the same, is an extra lane appears on your inside before you exit as can be seen in the image below: 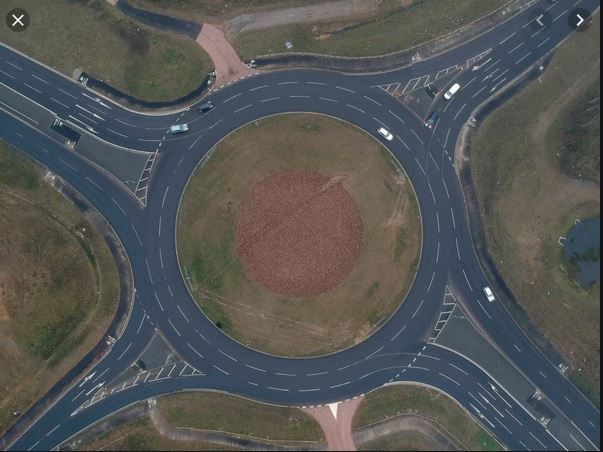 Naturally this has caused both confusion and accidents plus a vocal lobby to change the markings, all to no avail as nobody in the Highways Dept would ever want to admit they made a mistake and they speak of ‘safety is at the forefront of all we do’ and drivers will “adjust” there has been quite a lot of adjusting but accidents still happen and here you can see why.

The driver is at fault but you can see the problem coming from two lanes to three and needing to get into the outside lane to exit. What was the Highway Code ruling? You do not change lanes on a roundabout, although here you have to.

Another local gem is this traffic calming scheme that the jobsworth in the video claims is worth the money as they had to spend by the end of the financial year. Shame that someone didn’t bother to see it spent wisely.

The obvious fault and the one causing accidents (something else that is claimed is because it is new to drivers and they will get used to it, though they haven’t) is the fact there is no right of way, no red arrow, white arrow and signage showing who has the right of way, so it becomes a free for all and the speed limit supposedly imposed by the traffic calming goes out of the window as drivers, idiots, speed up to be at the chicane first.

The mini roundabout is another winner at the start of this chicanery. In the video you can see it is so offset as to be almost invisible and impossible to actually negotiate so drivers either cut off part of it or ignore it completely, and no, despite spending more money it hasn’t improved it as they still have no right of way signs. The dept must be run by someone with the foresight of Diane Abbott.

When we lived in Suffolk Colchester was not that far away and exiting the town on the bypass north they decided to put in this little number - I believe Swindon has one as well, known as the ‘magic roundabout’: 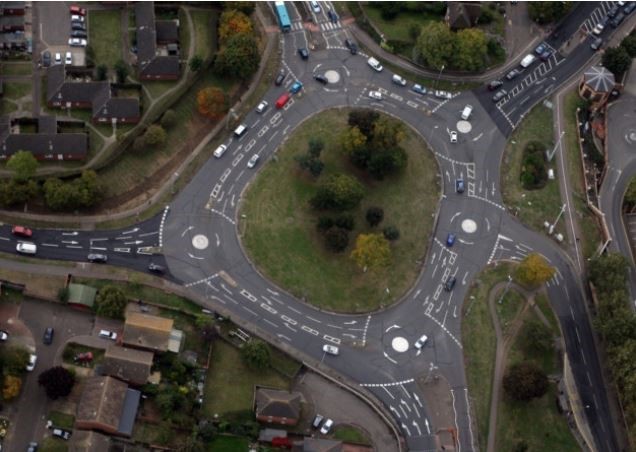 Now amazingly it can work rather well. The problem is two fold: not being something that is universally built, for those coming upon it first time it can be daunting to put it mildly, and it also has no obvious right of way so you hesitate, often without reason but with that sense of survival and it also fails when there is a lot of traffic i.e. rush hour using just two exits as the flow is non stop and it is difficult for any other user to get in so to speak. Another complicated solution on the cheap that a flyover would have solved permanently.

You don’t have to go far to find these engineering wonders. Chelmsford solved a problem forty years ago at the Army and Navy roundabout that was a nightmare in the rush hour: you guessed it, they did the right thing and built a flyover crossing it, only this was a cheap one-way alternating temporary structure, like a Bailey bridge, that forty years later is still there and falling apart. In the meantime traffic has increased and the one way at peak times usage no longer works very well; any chance of the permanent structure promised forty years ago? Nah. 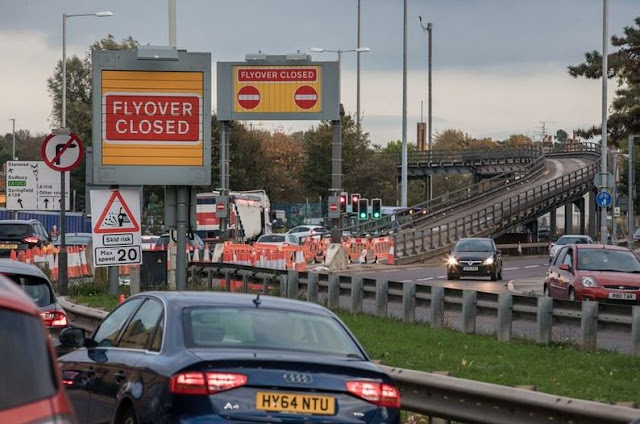 I have featured roundabouts but I am sure anyone could do the same with many other worthy road items such as the many badly-marked and -constructed exit lanes; the world is your omelette, as they say.

For example, we have just had a £5.6 million scheme to widen a road near us to twin lanes both ways to make it easier driving into the city. Only they apparently forgot that they had just finished a scheme on the same road nearer to the centre that has been reduced to one lane as a bus lane has been incorporated at great expense. You know it makes sense.

I will finish this rather joyless piece with another miracle of the road designers' art. This is on the A40 at Cheltenham: there are no words needed to describe this piece of failed logic: those that have to circumnavigate it have marked the offending section. Marvellous. 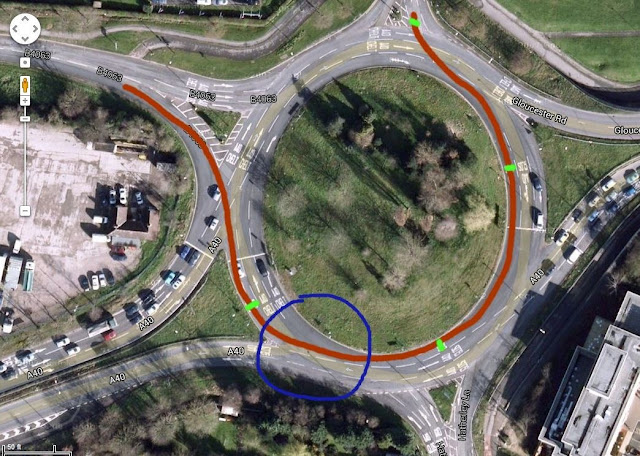 Yes, some roundabouts are an appaling nightmare of counter -intuitive design, you never know whether you have to change lanes or whether the lanes will spiral you out, and in some cases both may apply. My most hated local one near Stoke is trying to turn right from the south on the A500 onto the A50 towards Derby. On the approach there are 3 lanes for right turners because another slip road comes in right at the give way lights, then on the roundabout there are two lanes for vehicles turning right but literally at the A50 exit two additional lanes on the left merge in from the north. Consequently cars queing at the lights in the leftmost roundabout lane have to exit into A50 lane 3, from lane 2 you exit into lane 4. The road itself dips so even when markings have been renewed they are not obvious from the traffic light queue. It's mayhem, and insanely dangerous when the lights change, everyone roars away and a 40 tonner suddenly can't decide which lane it needs!
By comparison Colchester is a doddle.