Some memorable events (via Wikipedia):
22 October: 'Chubby Checker performed his 1960 #1 hit, "The Twist" on The Ed Sullivan Show, reigniting the popularity of both the dance and the record. The song returned to the Top 100 three weeks later, and became the first and only hit single to reach #1 twice.'
Also on that day: 'Presidential and legislative elections were allowed to take place in Haiti by dictator François Duvalier, but only Duvalier supporters were allowed to run for office. Duvalier had his name printed on each ballot paper, with the result that he was re-elected unanimously.'
24 October: 'A group of prominent campaigners for the preservation of the Euston Arch, including James Maude Richards, went to see British prime minister Harold Macmillan to argue for it to be dismantled and rebuilt elsewhere. Their arguments were unsuccessful, and the arch was demolished two months later.'
https://www.theguardian.com/artanddesign/2017/nov/07/euston-arch-rail-london-demolished-1961
But it may come back. Bits of the original were recovered a few years ago:
https://www.eastlondonadvertiser.co.uk/news/euston-arch-finds-its-way-back-home-after-50-years-3493664
... and if the money can be found, it may be rebuilt:
25 October: the first edition of the UK satirical magazine 'Private Eye' is published. (History) 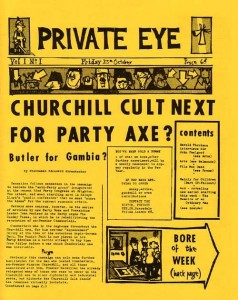 27 October: 'Berlin Crisis: Five days after the initial incident involving Albert Hemsing, 33 Soviet tanks drove to the Brandenburg Gate to confront American tanks on the other side of the border. Ten of the tanks continued to Friedrichstraße, stopping 50 to 100 metres from the checkpoint on the Soviet side of the sector boundary. The standoff between the tanks of the two nations continued for 16 hours before both sides withdrew.'
UK chart hits, week ending 28 October 1961 (tracks in italics have been played in earlier posts)
Htp: Clint's labour-of love compilation https://www.sixtiescity.net/charts/61chart.htm 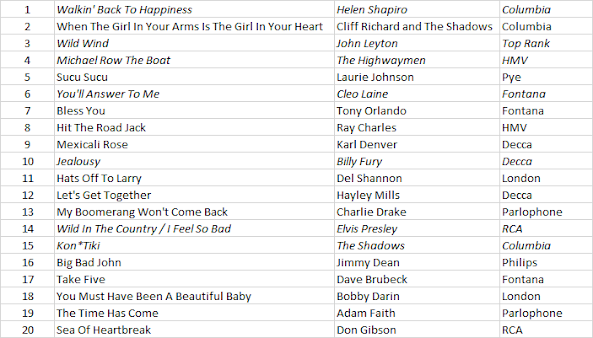