At #2 this week is Elvis Presley's 'His latest flame':
Some memorable events (via Wikipedia):
28 October - Berlin crisis: 'American and Soviet tanks began a gradual withdrawal from stand-off positions either side of the border.'
30 October: In response to the USA's nuclear weapon superiority and greater ability to deliver, the USSR explodes a 50-megaton atomic bomb, the 'Tsar Bomba' as a demonstration of its own power, even though it was not yet capable of launching a strike against America.
31 October: Stalin's body is removed from Red Square Mausoleum, where it has lain next to Lenin's since November 1953. https://www.thoughtco.com/body-of-stalin-lenins-tomb-1779977 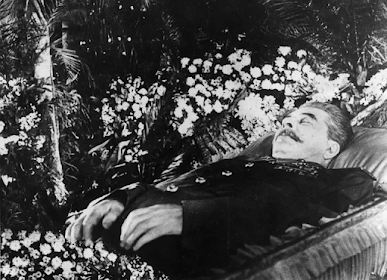 'Some say the writing was on the Kremlin Wall when Stalin was unceremoniously lifted off his own personal catafalque, taken outside and dropped into a nearby grave, and at the dead of night too, so as not to cause any fuss. I was there when it happened and it was all because a dotty little old lady rose to her feet at the 1961 Communist Party Congress and told delegates: 'Yesterday I asked Ilyich for guidance and it was as if he stood before me, alive, and said to me: 'I don't like being next to that man, Stalin.' They had Stalin out of the Mausoleum that very night. Lenin was alone again.'
- John Miller, 'All Them Cornfields And Ballet In The Evening', Hodgson Press 2010, p. 233
UK chart hits, week ending 04 November 1961 (tracks in italics have been played in earlier posts)
Htp: Clint's labour-of love compilation https://www.sixtiescity.net/charts/61chart.htm 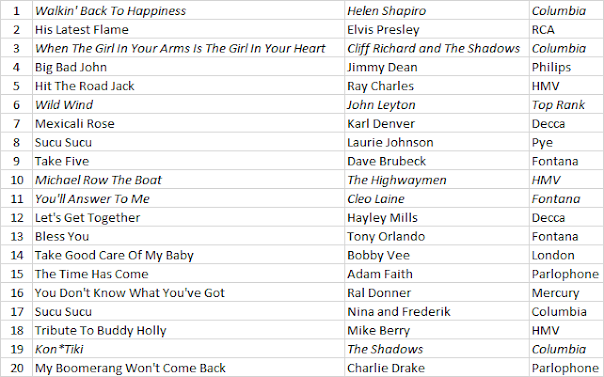 Helen Shapiro was my fave for a long time way back then.