... aka the Good, the Bad and the Ugly - not a lot of good below but I think the title paints the picture. 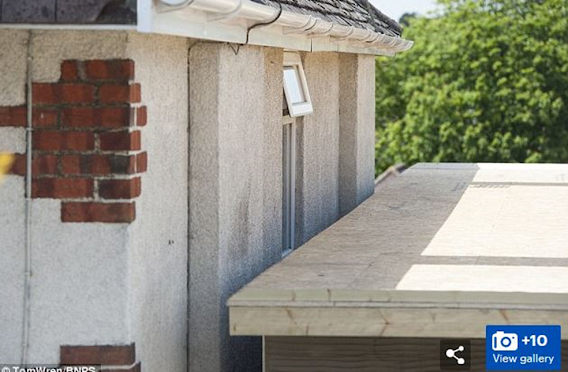 After my piece on the alliance between Gertrude Jekyll and Edwin Lutyens about the style of the arts and crafts era, I suffered a dose of reality when my old neighbour and I were talking about a proposed 800-house estate that has just been given planning permission not far from here. The country is currently suffering a housing boom as all can see every time they venture out and little of that exactly lifts the soul.
We seem for some time, decades actually, for reasons that are hard to fathom, accepting of poor design and layout with these new estates, never mind the push for profit over quality with non-existent gardens, smaller than ever rooms and cost-cutting measures such as small windows, all too evident when driving past these building sites all over the country.
Some builders are more guilty than others. One, Persimmon, annually comes last on most fronts but continues to churn out the same poorly-built inappropriate designs and sells them. There seems to be nothing in the council planning offices that suggests or insists the properties are simply not up to scratch, 'go away and come back with something better' is not in their vocabulary; all they see is extra council tax, and enormous legal costs if they should choose to contest any application
Out of the blue a new estate is nearing completion in one of the better areas nearby which is adjacent to an established fairly new one that falls into the category described above. It is a combined effort of affordable smaller houses and flats with the council being responsible for the overview. It is in sharp contrast to the usual dross and has a genuine village-like layout, a subtle mix of materials and colours used and a mix of traditional materials with a modern edge in the finish; it works well and shows with a little effort what can be produced.
It begs the question why, if the council can come up with something like that, do they allow the endless dross to be put up by so many of the major building companies? I think we can guess as to why much of it is passed yet surely there is a better way as many of these new estates are the slums of the future.
Despite this rather rambling intro I am actually going to comment on another aspect of awful design now rampant in the country at large. Nothing new in this: I remember it starting during the housing boom during the late eighties; I am referring of course to the home extension. 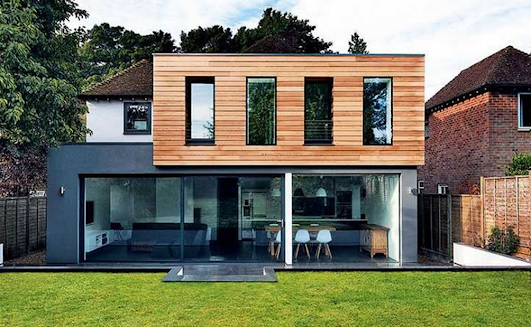 There is a house somewhere behind this example of box on box. 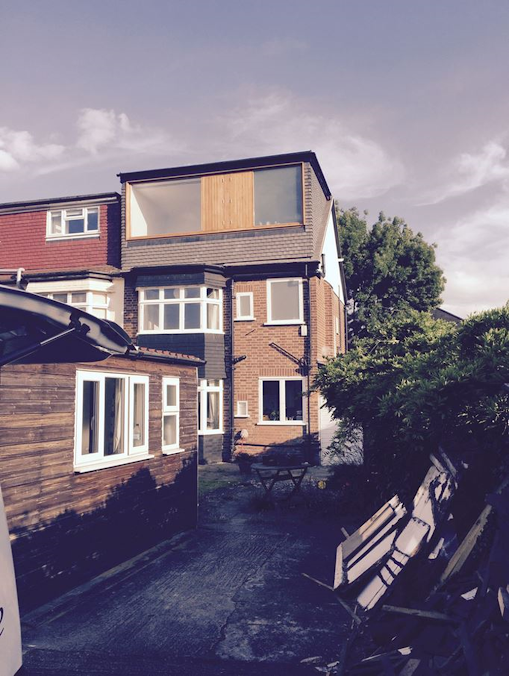 You cannot pick up a magazine such as Homes and Gardens without being assailed by endless space-adding extensions added at in many cases at great cost to what were humdrum terraced and other properties that are now being described as the new trendy part of (fill in as necessary), of what ever borough is being taken over by those that want to live nearer the centre and have the dosh to improve? those same once mundane houses.
This piece was sparked by having the same conversation with my old neighbour when it switched to the property next door which the owners are just moving back into; two doctors having spent eight months in rented while the house was rejigged to accommodate a totally inappropriate rear extension which we have labelled the U boat pen, for viewed from the rear that is exactly what it looks like, completely out of scale to the rest of the house; so much so that the upstairs windows on one side where the extension crosses over have had to be turned on their side as they would have lost the bottom of them, so high has the extension intruded on the original building.
No doubt the interior will give them what they wanted, a huge kitchen/living/dining area, but surely there was a way that could have been achieved without ending up with a concrete bunker.
In the case of this property which is detached it has little impact on my neighbour because of a row of brick built outbuildings on that side which hides it. 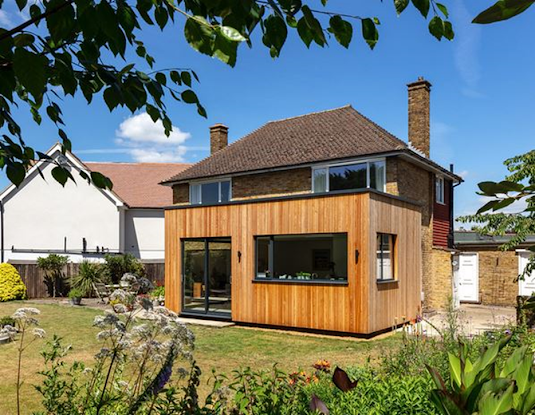 Container with cladding!
Others elsewhere are not so lucky. The relaxing of the planning laws twice under this government has given rise to not just hideous impinging rear extensions but equally hideous loft conversions, all no doubt adding space and value, especially in the environs of the capital, but in the vast majority of cases with some terrible design flaws and costs to neighbours in loss of light and privacy.
Nobody has the right to determine what a neighbour should be allowed to do to their own property, but there used to be limits and considerations as to what was permissible; that has all been swept away.
“The Town and Country Planning General Permitted Development Order 2015 (GPDO) was designed to free homeowners and councils from expensive red tape when “uncontentious” modifications to properties are planned. The rules allow both homeowners and developers to extend accommodation by up to 75% without planning permission.
"Opinions differ, however, on what counts as “uncontentious”. Single and double-storey side and rear extensions of up to eight metres in length are permitted under the order, as well as loft conversions and large outbuildings covering up to 50% of a property’s land.” 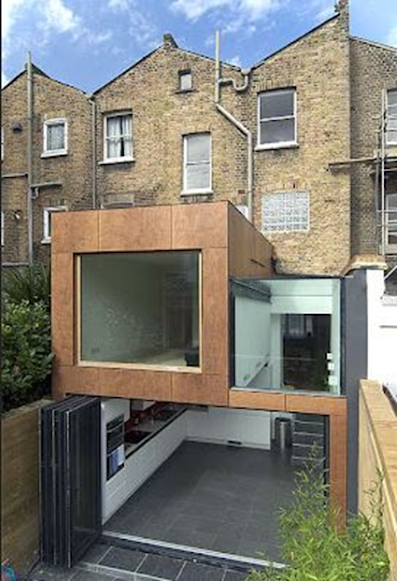 Dark days for the neighbours
This link shows how the planning rules relaxation has put some people in an impossible position regarding what their neighbours can put up. Many of the extensions today are not neighbour-friendly, to put it mildly.
https://www.avalonbuild.co.uk/blog/the-10-worst-permitted-development-loopholes/
And as with all else these days fashion dictates they have certain types of door openings that all look the same. Crittall windows for instance are now back in fashion everywhere one looks; box on box has been done to death; zinc roofing ditto along with timber cladding; all used with no thought for the building they are attaching to.
Modern extensions, well designed, can look the part on older buildings if well-conceived and designed, after all many listed buildings have had extensions from different periods added and many of them are not exactly harmonious; but many of them are, we should be learning from them.
Many of the listed building rules re renovation vary according to county or borough and are equally daft, but that is another subject. 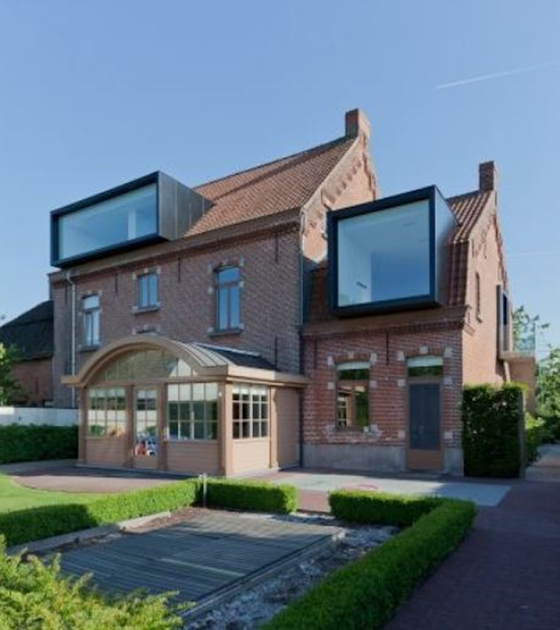 Where are the Teletubbies?
Many of today's extensions cost a small fortune within the Capital, but in nearly all cases this layout is dwarfed by the return should they sell. Outside these areas the gain is often negligible or neutral, which is why we see most of these monstrosities in city centres.

I worked in a town planning department for a couple of months in 1975. One of the planners there disliked a proposed bow window extension but planning laws did not allow a refusal on the grounds of ugliness.

However, one could turn down a development that adversely affected public amenities. So after a trawl through Roget's Thesaurus the officer noted a refusal on the grounds that it was 'prejudicial to the visual amenity of the area.'

I suppose this is an example of how authority extends its pseudopodia into every corner of our lives; but the examples you show here wouldn't have stood a chance then, I think.

Prince Charles was and is right to protest against these carbuncles.