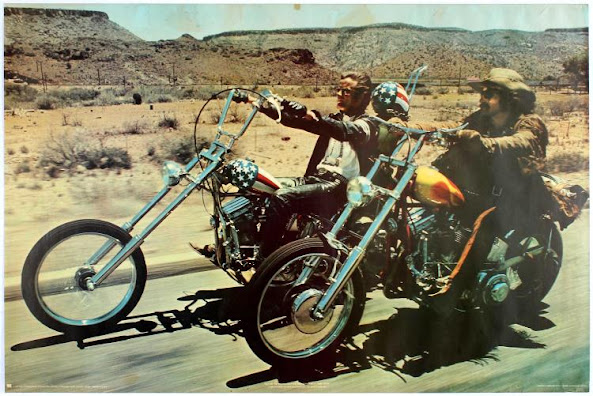 After Wiggia's excellent post about coachbuilt cars my mind started drifting to customised motorcycles and the bikes used in the film "Easy Rider." It is something that has niggled me for a long time.

The film was supposedly a hippie update of the Marlon Brando film The Wild One but the characters in Easy Rider were, for me, too absurd to be believable. For a start, they were clearly rich middle-class 'kids' pretending to be rebels, what used to be known as weekend hippies. Fonda's leather jacket looked exceedingly expensive and how many self respecting rebels are going to wear a crash helmet?

But the bikes. To have a bike like that in 1969 (the year of the film's release) you would have to build it yourself because they were not exactly mainstream, you would never see anything like that at your local motorcycle dealer. And if you didn't build it yourself you would have to pay somebody a lot of money to build one. Fonda and Hopper in their characters and in reality were not 'blue collar' workers, the sort of people who get their hands dirty. The hippies of the sixties grew up to be the yuppies of the eighties! (Tom Wolfe: “The ‘Me’ Decade and the Third Great Awakening") 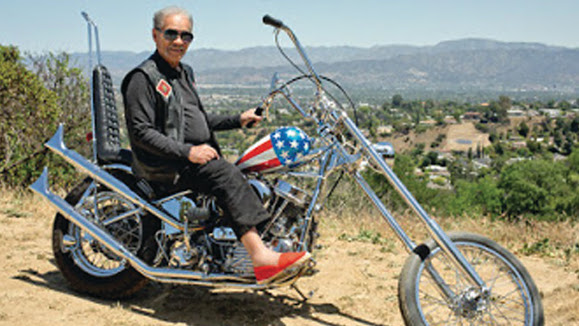 Anyway I had a look to see who built the bikes and lo and behold - 'In bits and pieces, the story behind the Easy Rider choppers began to emerge publicly, and identified two African-American bike builders: Clifford 'Soney' Vaughs, who designed the bikes, and Ben Hardy, a prominent chopper-builder in Los Angeles, who worked on their construction.'

Oh the irony, Clifford Vaughs and Ben Hardy both African-Americans and members of a mixed race m/c club called The Chosen Few in Southern California. The two links in the story, to The Chosen Few and to The Vintagent, are dead-ends but I found this in wiki:
https://en.wikipedia.org/wiki/Chosen_Few_Motorcycle_Club
- and I found more of the story on a Harley Davidson forum:

'Proper credit finally began to shine on both Ben Hardy and Clifford Vaughs early in the 21st century. In 2006 Discovery Channel's History of the Chopper included a well documented piece on Ben Hardy's influence on the custom chopper movement, including a clip from a 1980s interview with Hardy, and a lengthy piece from Sugar Bear, a current top builder who is also African-American and has a shop not far from Hardy's old place. There was also the Black Chrome exhibition at the California African American Museum, which included both Hardy and Vaughs and their contributions. Their names now get mentioned more, including in the Profiles in History auction description of the remaining Captain America chopper for $1.35 million, which mentioned both of them in their press release. The bike was described as "designed and built by two African-American chopper builders, Cliff Vaughs and Ben Hardy, following design cues provided by Peter Fonda himself." '

So there is a whole hidden back story behind the film. Here is a video from the Discovery Channel which tells more of the history of the bikes and their builders (Cliff Vaughs died in 2016 - https://en.wikipedia.org/wiki/Clifford_Vaughs):