Giles cartoon for this week: Crufts 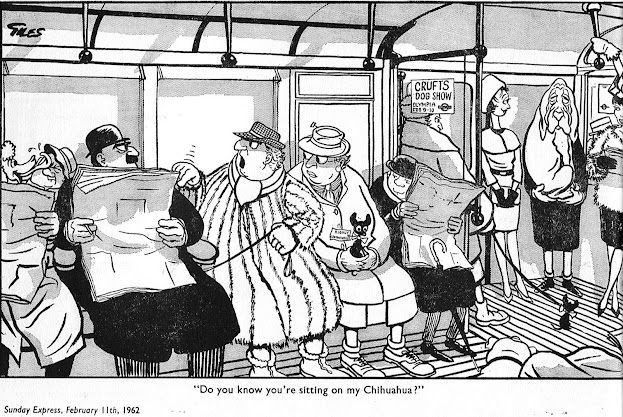 The famous dog show started in 1891 and has been held annually since then, apart from some of the years in the two World Wars.

Some memorable events (via Wikipedia):
11 February: 'Negotiations, between the government of France and Algerian independence leaders, opened at Les Rousses, a remote village in the French Alps, leading to a preliminary agreement on a transitional government.'
12 February: 'Spike Milligan and John Antrobus's play, The Bed-Sitting Room, is premièred at the Marlowe Theatre in Canterbury.' Here is the film version (1969):
13 February: 'A crowd of between 150,000 and 500,000 people marched in Paris in the first massive protest against the continuing Algerian war, which had gone into its eighth year. The occasion was the funeral ceremony for five of the nine people who had been killed by police in the Charonne metro station the previous Thursday. With many of the participants walking off of their jobs to protest, business in Paris and much of France was brought to a halt.'
14 February: '"A Tour of the White House with Mrs. John F. Kennedy", produced by CBS News and hosted by American First Lady Jacqueline Kennedy and CBS reporter Charles Collingwood, was broadcast on television by CBS and on NBC at 10:00 pm Eastern time. Attracting 46,000,000 TV viewers, or three out of every four households in America, it was the highest rated television program up to that time.' Video address: https://www.dailymotion.com/video/x74jyr0
15 February: 'In Elisabethville (now Lubumbashi), the legislature for the Republic of Katanga voted to ratify President Moise Tshombe's declaration that the breakaway state should end its secession and return to the Republic of the Congo.'
16 February: 'Voting in India's national parliamentary election commenced, with 210 million voters going to the polls. There were 14,744 candidates for the 494 seats in the Lok Sabha and the 2,930 seats in the legislatures of 13 Indian states. The final result was that 119,904,284 eligible voters participated, and the Indian National Congress, led by Prime Minister Jawaharlal Nehru, won 361 (or about 73%) of the seats. The Communist Party of India was a distant second with 29 seats (6%).'
'U.S. President Kennedy issued nine Executive Orders, numbered 10095 to 11105, delegating "emergency preparedness functions" for various federal agencies and departments, to be implemented in the event of a national emergency that required a declaration of martial law.'
17 February: 'In the North Sea flood of 1962, Hurricane-force winds and heavy rains swept across West Germany's North Sea coast and sent the waters flooding over the seawalls. There were 345 deaths in West Germany, 281 of them in Hamburg, when the Elbe River overflowed. An estimated 500,000 people were left homeless.'
'U.S. Secretary of Defense Robert S. McNamara outlined the doctrine of flexible response, the nuclear strategy of the Kennedy administration, in an address to the American Bar Foundation in Chicago. The plan called for building a large enough nuclear arsenal that the United States would have the ability to launch a second strike of nuclear missiles against the Soviets even after an initial exchange of destruction.'
UK chart hits, week ending 17 February 1962 (tracks in italics have been featured previously)
Htp: Clint's labour-of love compilation https://www.sixtiescity.net/charts/61chart.htm 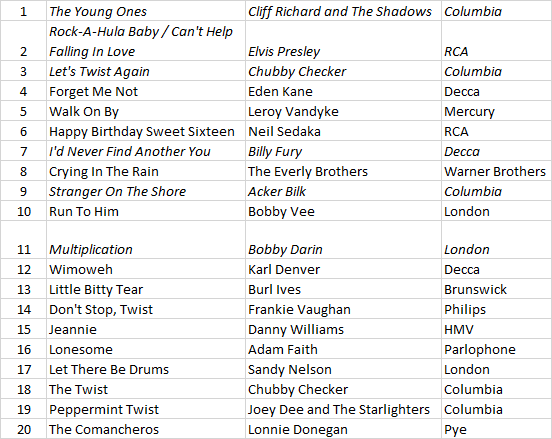