Herewith the tale of 'Guid' Sir James...  a tale from Scottish history with a surprising legacy:

It is the story of Sir James Douglas (c. 1286 – 25 August 1330) also known as Guid Sir James in Scotland and the Black Douglas in England. He was one of the chief commanders during the wars of Scottish Independence and indirectly was the inspiration for the song Flower of Scotland - "and stood against him, proud Edward's army and sent him homeward to think again" Following the Battle of Bannockburn it was Douglas and a party of knights who pursued Edward's army, a task carried out with such relentless vigour that the fugitives, according to Barbour, "had not even leisure to make water" Eventually Edward took refuge in Dunbar Castle which is approximately 70 miles from Stirling. That was a long chase!

(John Barbour (1320-1395) was a Scottish poet whose principal work was the historical verse romance, The Brus (The Bruce) which included the story of the Battle of Bannockburn.)

Upon his death (7th June 1329) King Robert Bruce assembled his captains and tasked Douglas to bear his heart on crusade to the Church of the Holy Sepulchre in Jerusalem, possibly as posthumous repentance for Bruce’s murder of his rival for the crown, John Comyn, at the High Kirk in Dumfries in 1306 and the suffering he inflicted on his own people with his ‘scorched earth’ tactics. When Bruce was dead, his heart was cut from his body and placed in a silver and enamelled casket which Sir James placed around his neck.

Around this time, King Alfonso XI of Spain was engaged in La Reconquista to drive the Moors out of Spain. The word was sent to Christian Nobles and Knights throughout Europe to assemble at Alfonso’s headquarters in Cordoba. Sir James Douglas as history shows was one such Knight who responded to the call. Jean de Bel in his Chronicles tells that Bruce wanted his heart taken to the Holy Land and presented to the Church of the Holy Sepulchre, while the poet John Barbour says that Bruce wished his heart be carried into battle against God’s foes.

Whatever the true specific request, the call to arms by King Alfonso fitted in with Sir James Douglas’ mission. In the Spring of 1330 Sir James Douglas armed with ‘a safe conduct’ from Edward III of England and ‘a letter of recommendation’ to King Alfonso, left Berwick to sail for Sluys in Flanders. Jean de Bel said that Douglas was accompanied by one Knight Banneret, six ordinary Knights and twenty Esquires. Douglas and his party remained in Sluys for 12 days and then departed by ship for Spain, finally embarking at Seville. There he presented his credentials to King Alfonso.

Sir James and his fellow Scottish knights joined Alfonso's army as they set out to reclaim the Moorish stronghold of the Castle of the Star (Castilla de la Estrella) which is near the village of Teba in what is now the province of Malaga.

There are several conflicting accounts of the Battle of Teba which is not surprising because this was 690 years ago and stories come down to us now through translation and with added 'colour' such as the tale of how Douglas, after attempting to rescue another comrade who had become separated, was surrounded by a rallying cluster of Moors. He tossed the silver casket and heart into the thick of the battle and shouted: ‘Now pass thou onward before us, as thou wast wont, and I will follow thee or die.’ The story of the thrown heart is a literary invention from C15th that evolved through various stages till the one shaped by Sr Walter Scott and published in 'Tales of A Grandfather' in 1827.

Sir James died in the battle as did his fellow knights Sir William de St.Clair and the brothers Sir Robert Logan and Sir Walter Logan. All of the accounts tell how the bodies were recovered from the field and were later returned along with Bruce's heart to Scotland. The bones of Sir James now rest in St. Bride's church in Douglas, Lothian and Bruce's heart is preserved in Melrose Abbey.

And so we come to the aforementioned surprising legacy. Several years ago a historian at Malaga University was researching the expulsion of the Moors and uncovered papers which shed some light on the battle. The story as handed down tells of how the Moors did not recognise the colours carried by the Scottish knights and were unaware of their high status. The Moors had been familiar with the colours worn by English or French knights but had thought the Scots were of lesser rank.

The Moors under the command of Uthman ibn Abi al-ula knew whom they had slain in the battle and so the bodies were gathered up and taken, flanked by a guard of honour, to the camp of Alfonso. Chivalry is not exclusive to the European ideal of knightly gallantry, it is a universal code among the warrior caste throughout the world.

In the spring of 1988, Douglas Mackintosh who is a direct descendant of Sir James, arrived in Teba with a one ton slab of sand stone sculpted by Hew Lorimer.

Diario SUR published a piece entitled "The descendants of a Scottish national hero will erect a monument to his memory in Teba." The text, signed by the journalist Mabel Moya, explains how the residents of Teba had ignored their relationship with the figure of the knight until recently. They were unaware of the relevance and admiration that this historical figure arouses among the Scottish people, and received with amazement the visit of a family from the United Kingdom, direct descendants of Sir James Douglas.

On this visit, they brought with them "a slab, weighing about one tonne," which "succinctly tells the story of Douglas," designed by sculptor Hew Lorimer and sourced from Creetown in Kirkcudbrightshire, Scotland. “Its price is estimated at about 8,000 pounds (around 1,680,000 pesetas) and its anchoring in the ground will amount to about 3,000 pounds (630,000 pesetas), an amount that is being paid with donations from people interested in making this project a reality.

The stone slab was kept in a warehouse until its location was decided, the Plaza de España. On August 25, 1989 , a grand opening ceremony was held attended by the mayor of Teba and George Nigel Douglas-Hamilton, Count Selkirk. 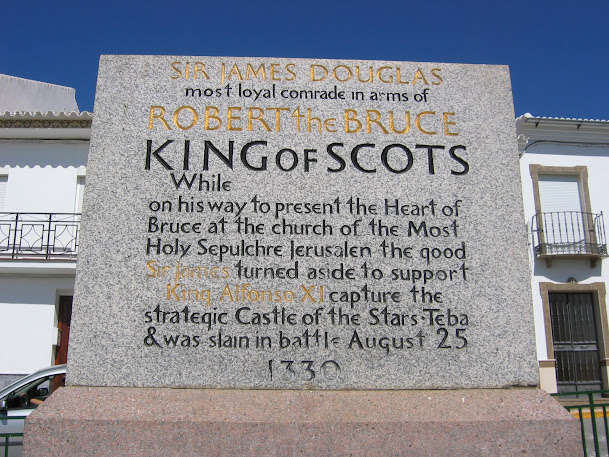 During the ceremony there was "an Anglican-Catholic ecumenical religious service", carried out by the priest of the Parish of Teba and the Vicar of the Anglican Church of San Jorge de Málaga, in addition to a military offering with the notes of the hymns of Andalusia and Scotland of the music band and bagpipes in the background.

Both Count Selkirk and the then mayor of Teba, Francisco González, made two speeches in which they expressed the desire to carry out a true twinning from which "exchanges of young people, schoolchildren, the elderly, sports, folkloric events, language learning and practice, integration of immigrants, commercial relationships, exchange of experiences in municipal management and administration ”, as recorded in the archive of the Teba City Council.

The stone itself is inscribed in English on one side and in Spanish on the other.

The Spanish love their fiestas and many town and villages have an annual Fiesta de Cristinos y Moros in celebration of La Reconquista. Teba City Council, now with the memorial stone in place decided that they too would have their own Cristianos y Moros but with a Scottish flavour. Every year on Aug. 25, the village celebrates the day of El Douglas. A pipe band from Scotland performs and there is a ceremony between the Teba mayor and other grandees and the visitors from Scotland. The square is also known as the Plaza Douglas.

Am mac mar an t-athair.