SOMETHING FOR THE WEEKEND: The Inexorable Demise of the MSM, by Wiggia 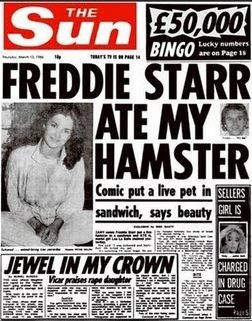 When I left school I got a job ‘in the print’, a loose term for a job with a union card that meant that at a certain age I was privy to the best paid trade in the country. 'Trade' is a bit of a euphemism as anyone with a union card had the opportunity to work in Fleet Street having been given a permit, to join the extremely bloated workforce and do very little, sometimes nothing and earn in one night what many worked two weeks or more for. It couldn’t go on and the stranglehold the unions had over the printing presses was finally blunted and then to all intents expunged by first Eddie Shah and the Rupert Murdoch. I got out before the collapse as there was no future I could see and so it transpired.

I mention that because during that period, and it was a fascinating one, I had access to all the national papers on a daily basis and many magazines as well. I became adept at scanning them - the Sun took all of fifteen minutes to actually read! But even the others I could absorb in double quick time.

The difference then was there was a distinct difference in the way the different titles came across with the news: investigative reporting was normal and apart from a couple of red tops who had tits at the top of the agenda, all had something to say on the matters of the day.

For me the ‘Thunderer’ was hard work to get through and I favoured the Telegraph as the go-to newspaper with the added attraction that it had the best sports reports of any paper by far. The broadsheets still had influential proprietors with famous family names going back decades and a newspaper was a valuable asset to own. Even the editors had status: many were household names, as were many columnists.

It has to be remembered that at that time, the early Sixties, the circulation of these news sheets was considerable, not quite the pre war numbers as television was beginning to eat into circulation numbers, but the Daily Mirror still had the proud boast of the highest daily readership in the world at 10 million emblazoned under its title. Those figures were the zenith and since then the slide has been continuous. London had then, it must be remembered, three evening papers: the Standard, News and Star; now there is only one and it is a free sheet. The evening papers started to run quite early in the day and had several editions with a stop press for the latest news and share prices.

Fleet Street at night when fully working was an amazing sight with the presses worth admission for a view on their own, and of course all the papers apart from a couple were located in the Street of Shame.

All gone now and even the wonderful art deco Daily Express building serves another purpose; the digital age has destroyed that centre of the world of news.

The dead tree press still has a role to play but a much diminished one. If it were not for the digital age and the ability of computers to set out newspapers and the ability to use joint out of town printing works many would have gone to the wall before now. Some are on the edge anyway: the Guardian, which back in the day was a decent newspaper, is eating through its not inconsiderable reserves and asks for donations - that is not a long term model for survival; the Express, once a right of centre paper, is now owned by Mirror Group as consolidation was the only hope for survival; and so it goes on.

I stopped reading the Telegraph some years ago as they slowly but surely got rid of their writers and correspondents. The final nail in the coffin for me was when they were found out to have invented sports columnists and were using outside reports with fictitious names as the writers.

I occasionally get the Times, and even that one-time representative of all that was good about this country, a publication revered around the world, is a shadow of former times; the business section which is now half of the paper is more interesting than the news section.

Television has not escaped the turning to dross of things that were once good. I can openly say I remember the time when Channel 4 news was worth watching; now it is a platform for the sneering Jon Snow to castigate anyone and everything not of the Left.

Programs like Panorama were intelligent, informative and largely without bias; no more. We are inclined to read into the bias of the BBC more than we should but it is undoubtedly there and for the State broadcaster that is totally unacceptable in news reporting: the blanking of cultural issues (as they call them), the incessant reporting of any minor infringement of items, statements from the likes of Trump, as opposed to anything on the Left; the incessant war against Brexit... An independent source targeted the Today program in the six months following the Referendum and found that something like 80% of all the people they had on the program to discuss Brexit were 'remainers'; that again is simply not acceptable; imposing their views by the way they present them is simply not on, but what else do we have?

Well, the rise of Twitter was a salvation to a degree, but that and similar platforms have become a battle ground rather than a debating area. The split that now exists in our nation is magnified online, and further the people who run these online platforms are now themselves taking sides and banning people who have done very little wrong other than go against what seems to be the editorial line of the owners.

We see before us now the results of all this bias and selective reporting: a government that cannot put a foot right at the moment, and gives out conflicting data and directions, has hardly a question of note put to them. A decent press and media would have asked the obvious by now but no, they are as muddled as the government, and in the meantime, almost unnoticed by the majority, the country is going down the pan fast.

A good example was in a small piece at the back of the paper in the business section a few day ago: a think tank for financial ‘experts’ has suggested that negative interest rates could be a good thing. This is not the first time this has been voiced, but the bit underneath that suggests it would create a £25 billion black hole in pension funds should be a prominent article, as it affects so many with already plundered private pensions; but no, such details are to be, as Private Eye used to say (when that was worth reading) 'continued on page 94.'

As the late News of the World used say on its header, ’All human life is here.’ It was then; not so much today, only a very selected version.

I try to filter out media bias by not reading newspapers. I listen to to headline news (rather the in depth analysis).

The only news publication I read is 'The Week'. It provides a variety of viewpoints giving pause for thought.