At #2 is Elvis with 'Rock-A-Hula Baby':
Giles cartoon for this week: the Transport Strike 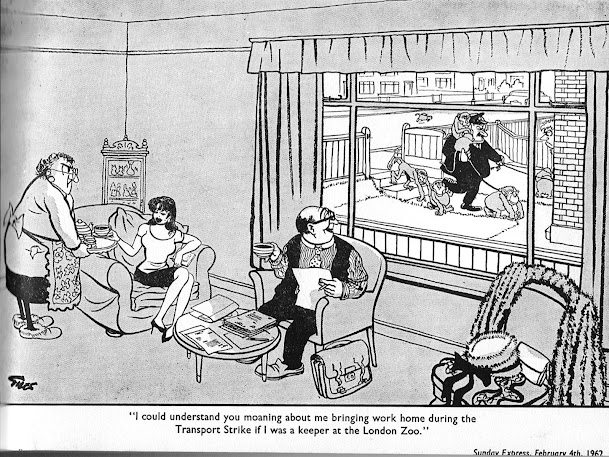 The Conservative government's decision to impose a 'pay pause' on public sector workers and override decisions by third part arbitration bodies (see more on Broad Oak for 6 January) continued to cause trouble in industrial relations.
On 29 January 1962 there was an unofficial one-day strike by railway workers on parts of the London Underground and 'the South-Eastern Division of the Southern Region, where about 40 per cent. of normal services were run during the peak hours,' the Minister of Transport (Ernest Marples) reported to Parliament. Commuters were forced to find other ways to get to and from work.
From The Spectator, 2 February 1962:
'The worst day for London traffic since the invention of the motor car' was the result of Monday's one-day token strike by railwaymen on the Underground and on British Railways Southern Region. Mr. Gunter, the 'shadow' Minister of Labour, told the strikers that they were wrong and doing their cause harm, and the Government that it had lied to the railway- men and cheated them. At 8.45 that evening (according to a letter from a Liberal MP to the Times) there were six Conservative MPs in the House to take part in the debate on industrial relations and the transport crisis. Mr. Gaitskell told Mr. Woodrow Wyatt that his idea of a Liberal-Labour pact to fight the Tories at the next election was a red herring that had become a dead duck. The post office workers ended their work-to-rule.'
At that time the railways were administered by the British Transport Commission, which had its own financial difficulties - 'Rising costs, industrial action and competition from road traffic meant that the British Transport Commission was in financial trouble by 1955.' The Commission was replaced with new authorities under the Transport Act 1962 with effect from September 1962.
Labour MP Ray Gunter argued in Parliament that industrial relations were not only a matter of the ethical treatment of workers but had implications for morale affecting British competitiveness as we headed towards membership of the European Common Market:
'Do the Government ever stop to think how our industries are to be geared to the European market if we are to go in? How are we to keep pace with modern techniques if there is to be bitterness, sourness and frustration? if the men whose aid we wish to call upon have been soured, how can we expect to achieve results?'
Some memorable events (via Wikipedia):
30 January: 'Fourteen of the 21 member states of the Organization of American States voted to oust Cuba. Six other nations abstained, and Cuba voted against the resolution, which barely passed by a 2/3rds majority.'
'In what became known as the "Tanganyika laughter epidemic", three students at a girls' boarding school in the Tanzanian village of Kashasha began laughing, and other students reacted. Within six weeks, 95 of the school's 159 students were laughing uncontrollably, and on March 18, the school closed and sent the pupils back to their home villages. The mass reaction spread to the villages of Nshamba, Ramanshenye, and Kanyangereka and affected hundreds of people before halting in 1963.'
1 February: 'U.S. President Kennedy delivered "the first presidential message entirely devoted to public welfare", proposing that federal aid to the poor be extended to include job training programs and day care for children of working parents.'
'The Soviet Union and Ghana ratified a $42,000,000,000 trade pact, with Soviet engineers to assist in the construction of new industries and railroad lines in the West African nation.'
2 February: 'Three U.S. Air Force officers were killed when their Fairchild C-123 Provider became the first USAF plane to be lost in Vietnam, as the U.S. carried out Operation Ranch Hand. The cause of the crash was not determined, although the concern, that it was shot down by Communist insurgents, led to orders that the defoliant spraying aircraft receive a fighter escort.'
'Pope John XXIII announced the date for "Vatican II", the first worldwide conclave of the Roman Catholic Church in almost 100 years, to begin in Rome on October 11.'
'The last underground shift was worked at the colliery in Radcliffe, Northumberland.'
'The Soviet Union conducted its very first underground nuclear test. Previously, the Soviets had conducted all of its atomic and hydrogen bomb explosions in the atmosphere, including more than fifty since ending a moratorium on testing.'
3 February: 'The United States embargo against Cuba was announced by President Kennedy, prohibiting "the importation into the United States of all goods of Cuban origin and all goods imported from or through Cuba". Presidential Proclamation 3447 was made pursuant to the Foreign Assistance Act of 1961, "effective 12:01 A.M., Eastern Standard Time, February 7, 1962."'
'At 7:05 am Indian Standard Time (0135 UTC), a "doomsday period" (as predicted by Hindu astrologers, began. It was reported that the astrologers had predicted that on Saturday, Sunday and Monday, the earth would be "bathed in the blood of thousands of kings" because of the alignment of six planets, the Earth, the Sun and the Moon. In Britain, Aetherias Society director Keith Robertson spent February 4th awaiting disaster along with many of the society's members. He had forecast that "very soon the world will do a 'big flip' when the poles will change places with the equator... 75 percent of the world's population will be killed", but the alignment and eclipse ended without any notable disaster.'
UK chart hits, week ending 3 February 1962 (tracks in italics have been featured previously)
Htp: Clint's labour-of love compilation https://www.sixtiescity.net/charts/61chart.htm

I was 10 back then so the music, although familiar and nostalgic, was not from my key period. I came to hate Stranger on the Shore though as it was played so much.

Hi DJ: I know what you mean, the generation that still wore elasticated arm bands on their shirt sleeves and tie clips - we were past that.