I came across whilst rummaging through the detritus one carries with one when you move house - why we do this is a subject for another day - but anyway, looking for some papers I came across an old menu from the Seventies from Berni Inns. Easy to laugh at such places now, yet going by the menu it offered better fare than many fast food outlets today, and you could get an alcoholic drink - no skinny lattes then, thank God.
So as one does I started delving into archives of old menus, from the cafe restaurants of our youth and before to those early fine dining establishments that we went to if we had the cash for a special occasion.
We soon forget, yet some things are very obvious in those periods, how the posh restaurants insisted in printing menus in French which hardly anyone understood and resulted in calling the waiter over and stabbing a finger at what one thought was a dessert to be snootily told it was a vegetable and then having to cringingly ask for advice on what was available in that section, only then for the waiter to, still snootily, repeat the offerings in French with an English translation for the proles.
When they started to put English translations underneath the French version it was the last throw of the dice in pretentiousness.
I remember well the first time I took my to be wife for our first proper meal, lunch at Rules, London's oldest (1794) restaurant: 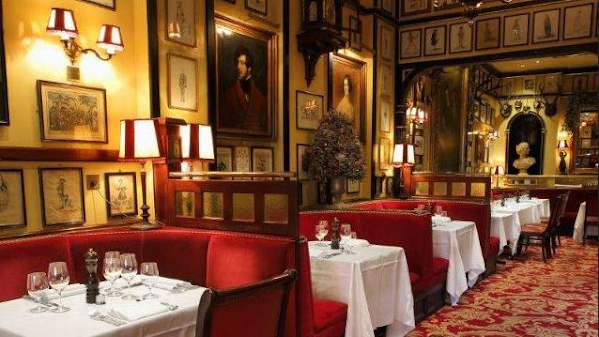 Having done my ‘homework’ I ordered the Châteaubriand and settled back on the banquette to peruse the wine list. I knew very little about wine in those days apart from my initiation into the intricacies of German wine labels, so when the wine waiter came calling I ordered the Rudersheimer Rosengarten and the wine waiter said ‘good choice’; a kindly man under the circumstances because it was anything but.
In those days fine dining was for the other people. We had the first signs of chain restaurants in the likes of Bernie Inns and others, it made a change from the plastic cheese roll under a glass dome cooking quietly on the pub counter.
I remember Woolworth had a rather good cafe, it was only when researching this I discovered just how comprehensive their pre-war menu was: 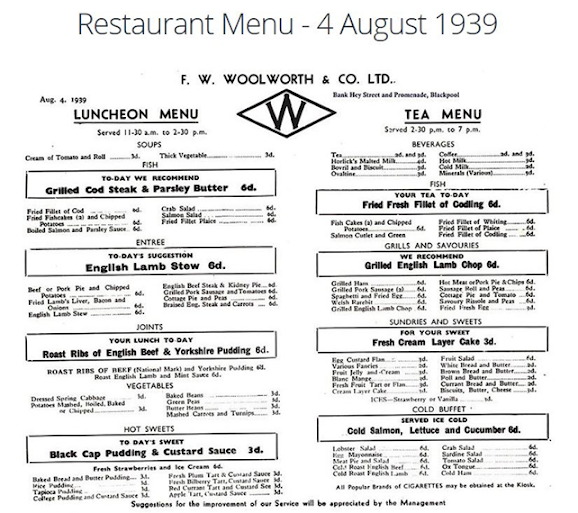 Apart from an early attempt at the bottom of the menu to garner feedback, the other item of note is the amount of meat products on the menu and ‘lobster salad’, in Woolworths!
Higher up the scale, this menu from Wheelers The Ivy gives another insight into how the other half ate in the Fifties, still clinging to the French language and a preponderance of meat and fish dishes. Good to see the old favourites up there, the potted shrimps and prawn cocktail, so derided since but making a comeback now: 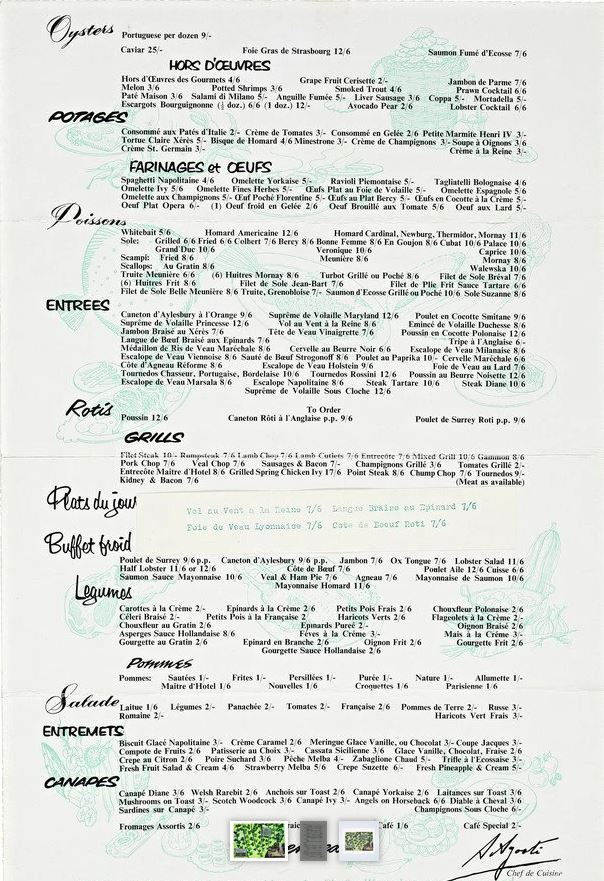 Menus from other posh eateries abound and none are posher than Buck House. A Queen's menu from 1906 shows nine courses and again plenty of protein; naturally at this moment in time the menu is again in French. Magnums, quite rightly, of champagne for Derby Day: they must have had a tip. 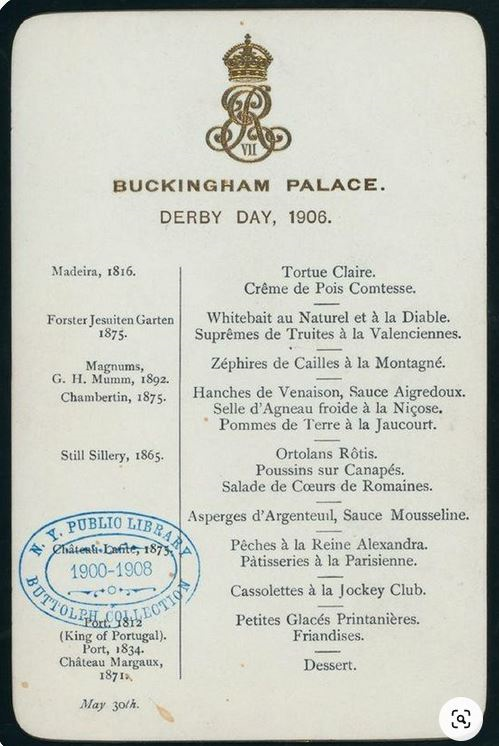 The great ocean liners that dominated transatlantic travel and vied for national pride with elegance and speed for those first class passengers and made sure they never went without during their voyage.
Eight courses at the Captain's table, I bet that went down well - I’ll get my coat... 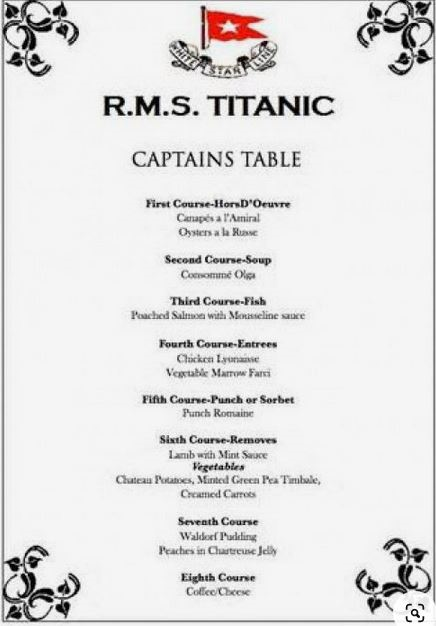 All things are relative to the age but sometimes there are surprises on these menus in that what are considered delicacies today and have a price to match, were not so in days gone by. Oysters and foie gras were cheap and plentiful, as two examples; lobster as on the Woolworth's menu was available almost everywhere as were ortolans; today you struggle to find decent whelks.
The one below I actually remember. Although the fare is similar to the others a couple of items stand out: tripe and onions, and marrow bones; long time since I saw those two on a menu. 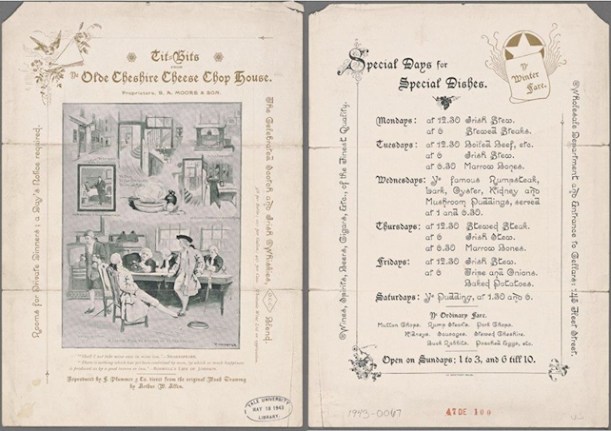 Today we are used to buying products that are cheaper than in the past because of modern big farming techniques and international trade, but not everything works that way. This wine list from a Cunard liner in 1927 shows the price for a bottle of Chateau Latour at 12/6; £1 then equates roughly to £44 today, making that bottle in today's money around £27 and that is a restaurant price; today a bottle of Latour retail would set you back in the region (depending on vintage) of £400-600 a bottle. You really could drink yourself to death in style for very little money then. 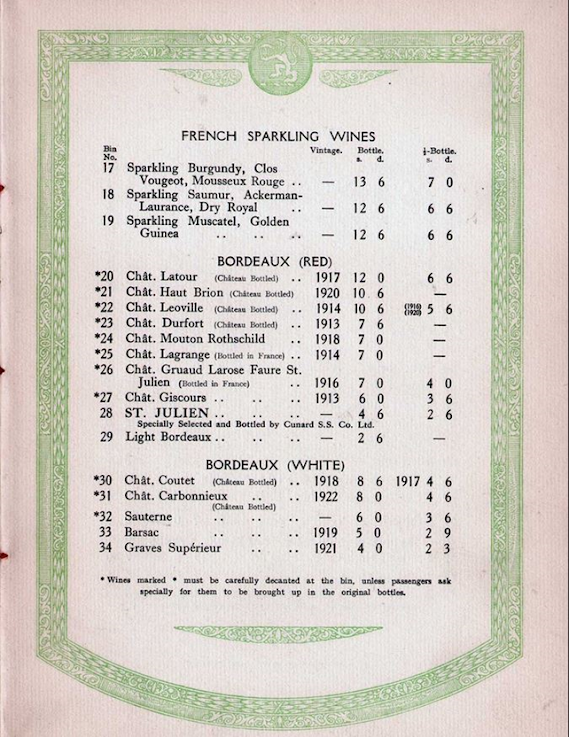 With all of the menus you can see there is an awful lot of meat, fish and game on offer. In today's world full of fatties and those same fatties being urged to do away with meat as are the rest of us, you do wonder why so few in those days were fat and yet today fatties are everywhere, and I don’t care if using that word offends, it should because there is absolutely no need to get in that state.
Maybe McDonalds have to share some guilt in today's fattism: ‘buy them by the sackful’ is not very helpful when wanting to lose weight! 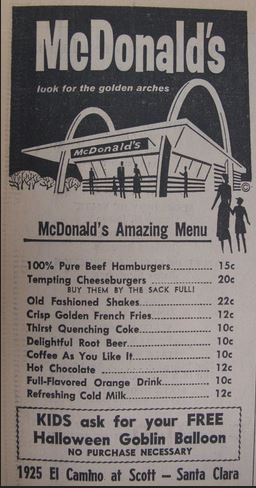 And when did you last see a seafood menu like this one? - and while you are perusing the menu, do not play with the candelabres: 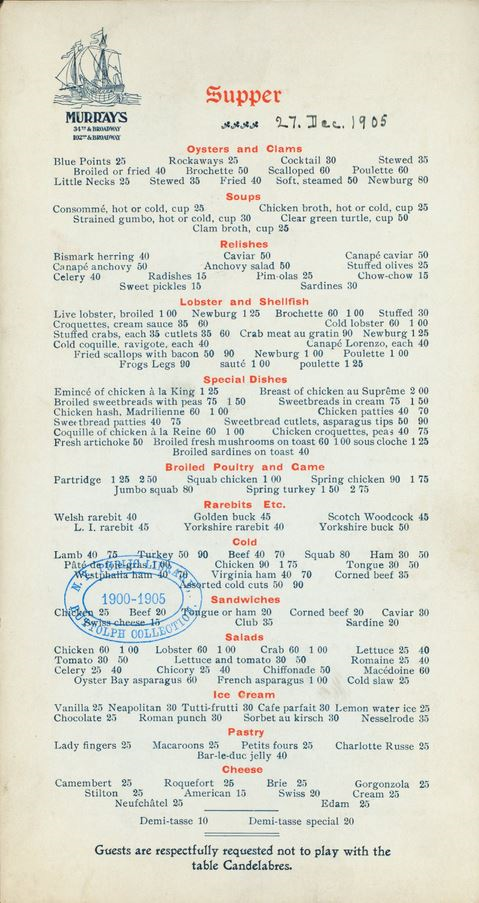 But today those whole plates of steak have disappeared, we are presented with artistically arranged plates of very little for very much. At least the Argentinians know how to cook and present a steak - all vegans look away now… 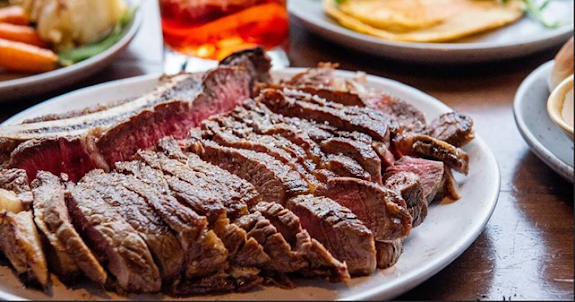 This all makes my 'Leg of mutton' joint' look a bit tame...

When Schooner Inns (Watneys), became popular in the late sixties, 'The Goat in Boots' in Fulham Road was a huge diversion from normal restaurants, and we used to eat in peculiar egg-shaped tables hung from the ceiling!

The main problem the place had, was that one of the first real US restaurants opened up on the opposite corner! 'The Great American Disaster' used to have queues all down the road!

I was going to include for an exotic touch, the Carnivore in Nairobi, it is a bit of a tourist trap but back in '95 when last there they did have a lot more exotic meats on offer, such as Giraffe, Hippo, Antelope and Zebra, now it seems they mainly rely on Crocodile and Ostrich which are not that exotic.
https://tamarind.co.ke/restaurant.php?carnivore
But you do get a good helping!

In bygone days, prisoners in Maine rioted because they were fed too much lobster.

I enjoyed the menus. Prices were reasonable 100 years ago if you were rich. The people that remembered them have passed away.

I can remember the 20 cent cheeseburger, inflation shows its colors over time.

As you get older, you begin to see the grand scheme of government. And of course nobody listens to "old people."

Matthew Norman, writing in the London Evening Standard, groans that the merest hint of summer unleashes a glut of salmon with its ugly pink flesh (looks slimy, tastes dry) on every menu. "At least three times a week and prob-ably more, at every dinner party, every wedding, every social occasion of every kind, we will be faced with the problem of once again smiling fiercely and convincingly murmuring, 'Ooh, salmon, how lovely.'"

The Tyneside shipyard apprentices couldn't complain that they were eating farmed salmon, as we do today. But it was a clear case of the familiarity that breeds contempt. Given an overload of farmed salmon can we ever again feel the same excitement about eating the first wild salmon of the season?