This was first posted at Nourishing Obscurity on November 24th, 2010 but was lost along with a lot of other posts when James had his WordPress 'crash' It followed on from one of his posts titled The Mathematical Precision of the Universe and was also a clarification of a BBC programme which is still available on their iPlayer.
----------------------------------------------------------------
I am prompted to continue the theme after watching a programme on BBC4 last week about Leonardo da Vinci’s drawing of Vitruvian Man. http://www.bbc.co.uk/programmes/b00vl3h1
I found the programme to be dumbed down and, in parts, risible. Most unsatisfactory and it wasn’t clear what point they were trying to make.
So allow me to make it for them.
The BBC described this as a puzzle. It is not a puzzle and never has been. The relevant passage in Vitruvius is very clear.
Leonardo abstracts it on the drawing in mirror writing and it is here -https://www.geoman.com/Vitruvius.html
Although this passage is in the section on Architecture it is really about the proportions of the human body and then it continues to show how architectural design should follow the same rules.
Leonardo drew a man in the correct proportions (and his notebooks carry several anatomical drawings to illustrate the proportionality of and within the body) inside a square.
Then, in accordance with the description in Vitruvius, he placed a compass point on the navel and drew a circle around the figure. Following which he placed the two additional arms and two legs fitting within that circle.
This is why the square and the circle are offset. 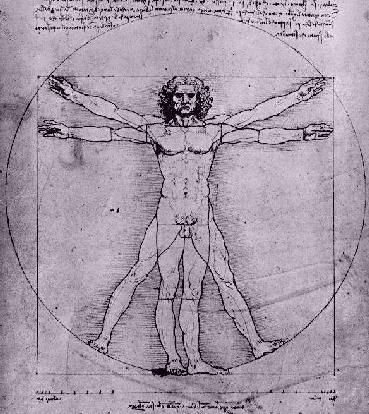 The navel is indeed the centre of the circle but it is not the centre of the square. Look very carefully and you will see that the navel bisects the square at a point 0.618++ between the top and the bottom of the square. Thus, the human figure is divided at the navel by the Ø ratio (Phi) otherwise known as the Golden Section. And here we begin to see the importance of this Golden Proportion. It occurs naturally in the human figure.
This is shown in the next drawing, an analysis of Leonardo’s. If we take the side of the square and thus the height of the man and divide it into 144 parts then it can be seen that the distance from the feet to the navel is 89 and the distance from the navel to the top of the head is 55 and the distance between the top of the square and the top of the circle is 34. These are all numbers arising in the sequence of Fibonacci numbers and, just as these numbers are related to the Phi ratio, so the body is defined by this same ratio. https://en.wikipedia.org/wiki/Fibonacci_number
Why use 144 as a base measurement? The answer is, again, in the book by Vitruvius. He states that the ideal figure is 6 foot tall; which divides into 72 inches or 144 half-inches. Leonardo, in his notebooks, made further study of the human frame and always with reference to Vitruvius because that book contained the necessary clues. He found that the body was perfectly proportioned in terms of the ratio expressed by the Golden Section.
For example; the finger joints are related to each other and to the hand and arm in exactly this Ø ratio. Leonardo concluded that this ratio is the one which expresses growth in the human form. This is confirmed by the place of the navel at the precise Ø point between the head and the foot. The navel, of course, is the point at which we all commence our lives. We all begin as a germinated seed in the womb, connected to our mothers by the umbilical cord. Growth begins at this central point, the navel.
All of nature grows in exactly the same way. Everything from a human embryo to the spiralling galaxies in the universe follows the invisible rules of the Ø ratio.
As James said, this points to the mathematical precision of the universe.
Marcus Vitruvius Pollo knew it, Leonardo da Vinci knew it and the poet John Dryden knew it-
'From harmony, from heavenly harmony
This universal frame began:
From harmony to harmony
Through all the compass of the notes it ran
The diapason closing full in Man.'
John Dryden (1631-1700)
……….to be continued…………….