It is that time of the year again, when the whole world descends on Pamplona (Navarra) in Spain for the Fiesta de San Fermin. The annual 'running of the bulls' has been cancelled for the past two years and I can see from the Spanish media there is an eager anticipation at the return of what is, let's face it, a massive tourist attraction and a very large contribution to the local economy. And I have seen and heard that the running of the bulls will be broadcast live each day as usual via rtve.es https://www.rtve.es/

The fiesta begins on the 6th of July and this moment is marked by a rocket – the “Txupinazo.” All morning, crowds gather in the “Plaza Ayuntamiento” and at midday the Mayor and members of the Council step out onto the balconies of the Town Hall to announce “Pamploneses, Pamplonesas, Viva San Fermín! Gora San Fermín!” (people of Pamplona, long live San Fermín!)
The crowd responds with cries of “Viva!” and “Gora!” and the rocket is launched into the sky. The explosion of the fireworks rocket is the signal for the start of eight and a half days of non-stop partying, drinking, dancing, drinking, eating, drinking, music, drinking, running with the bulls, more drinking until all are too exhausted to continue. (Sleeping is optional)
It is said that if you can survive SanFermin and Oktoberfest in the same year then you are a truly heroic toper deserving of the utmost respect and veneration. 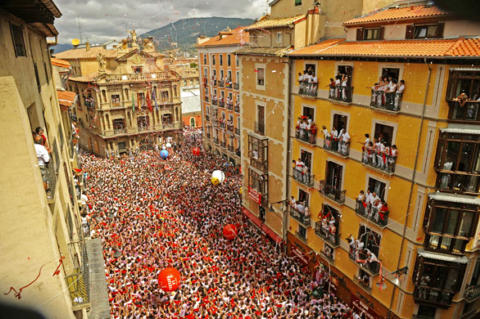 But first, a bit of background to the fiesta.
The Fiesta has its roots in medieval times. Its origins lie in a trade fair, whose existence seems to date from the early thirteenth century. To this fair or market, which coincided with the beginning of summer (festival of San Juan), farmers and cattle traders from the surrounding area brought their animals. The young men of the city joined with the passage of the farmers and drovers through the streets to run alongside them, racing among themselves and these races eventually became part of the festivities. (Probably apocryphal but it makes for a good story.)
Every September 25, on the other hand, the locals honoured one of the co-patron saints of Navarra, San Fermin (the other being San Francisco Javier). And the patron saint of Pamplona is not San Fermin, as many people mistakenly believe, but San Saturnino de Tolosa (modern Toulouse), whose feast falls on November 29. The latter had the honour of baptizing in the third century the early Christians of Pamplona,​ not least among them San Fermin, who become the first bishop of the city. There was also a fair and festival during early autumn celebrating these saints’ days.
In 1591 the day of San Fermin was moved to July 7, becoming part of the the summer fair. Behind this change was the desire of locals to enjoy their holidays in better weather conditions: rain was less likely in July than in September.
The festive program of 1591, organized by the Regiment (Old Town Hall), consisted of a proclamation, a tournament with lances in the Plaza del Castillo, a theatre, dancing and a procession. And, to crown it all, a corrida de toros.

Now, of course, the main attraction are 'los encierros' (the running of the bulls).
For centuries los encierros had no official sanction. It was more of a wild piece of mischief on the part of the young men of the town to which the authorities turned a blind eye. It was in 1867 that the first ordinances were passed regulating los encierros, a name first used in 1856. On that date the current schedule was adopted with a course of about half a mile through the streets leading to the newly built bullring. 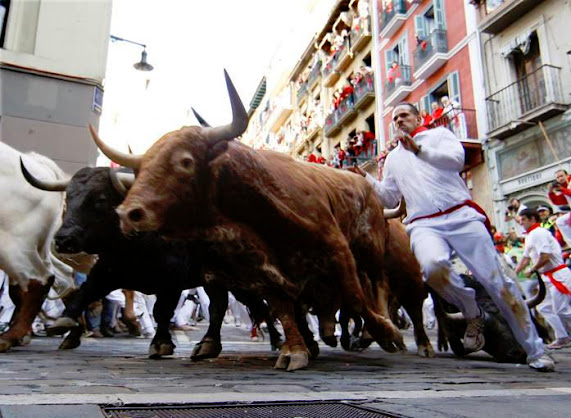 On the 7th July at 8am, and on each of the next seven days, six bulls and six steers are run along a course from the corral to the Plaza de Toros.
Hundreds of people take part, running ahead of and alongside the bulls (but mostly after them in truth.)
If you can run half a mile in about two minutes, you should be able to keep ahead of them, or at least alongside for part of the way. If you wish to try to outpace the bulls you will need to be young and fit and healthy and preferably an Olympic class athlete. Half a mile in just over two minutes? In a large crowd of runners who are mostly looking over their shoulder rather than where they are going?

There is a (remote) possibility that you will die (there have been sixteen fatalities since 1910.) The gory details are here - https://www.sanfermin.com/en/running-of-the-bulls/a-tragic-history-deaths-running-of-the-bulls/ )
There is a slight possibility that you will be injured and such injury will come, not from one of the bulls, but from not looking where you are running and tripping over those who have already fallen. It can at times be like an obstacle course as you can see in this video from 2019 -

But there is more to the fiesta than the running of the bulls and you can read about it here. - https://www.sanfermin.com/en/

And when it is all over and it is time to say goodbye for another year we come to “Pobre de mí”, the End-Ceremony of Sanfermin.
At midnight on the 14 th July the fiesta formally closes with the ceremony called the “Pobre de Mí.” This takes place in front of the Town Hall, where the fiesta was opened 8½ days earlier. There are other events also taking place in the city, (such as the Peñas gathering in the main square – the Plaza del Castillo, for their own celebration).
However, in front of the Town Hall a large crowd gathers to sing “Pobre de Mí, Pobre de Mí, que se han acabado las fiestas, de San Fermín.” (Poor me, poor me, for the fiesta of San Fermín has come to a close).
This is a very sad occasion because it is the end of the fiesta, (though many are relieved because of their flagging stamina they cannot take any more), but they still look forward to next year and even sing “Ya falta menos” (there is not long to go).
The best guide to it all comes from Alexander Fiske-harrison who wrote a book called 'Into The Arena' a few years ago which is an exceptionally good book. It tells the story of his journey into the world of the corrida and how he trained as a bull fighter to eventually facing a toro bravo in the plaza de toros.
This is his web page - https://thelastarena.com/ and here he is giving his reasons for his interest and involvement in tauromaquia: