A Tribute To Frank Sinatra, by Wiggia 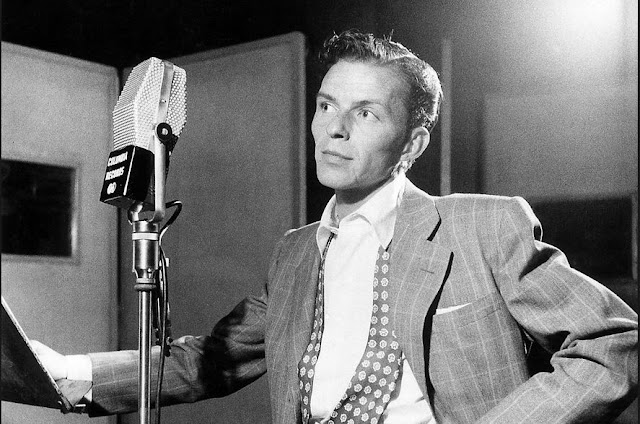 So much has been written about Sinatra that anything I put on paper seems superfluous,  yet twenty years have gone by since his passing and with time it matters not how famous or influential you were in life, it soon becomes forgotten, only revived when something related is mentioned or discussed.

Sinatra was quite simply the greatest songsmith of his and subsequent generations. We can all have favourites in music, mine was always Mel Torme, but that in no way diminishes the effect Sinatra had on music during his lifetime.

With all these great performers they learnt their craft the hard way, the details of that and more are far too long to include or do justice to here but this link fills in all the details:

Certain details show the way forward, starting when Frank was singing for his supper and started to take elocution lessons: for a boy with scant education and little schooling that was a big move, but it was his tutor John Quinlan who was the first to notice his remarkable vocal range.

It was the Swing era that launched Sinatra on the big stage with bandleaders Harry James and Tommy Dorsey. Dorsey had a big influence on Sinatra who admired his trombone playing and tried to model his breathing on the seamless style Dorsey had when playing. He left Dorsey in ‘42 when he had become bigger than the band and then the bobby-soxers period erupted every time he appeared on stage as a solo artist.

Now with Columbia records, his output was curtailed by a Musicians Union strike 42-43 but in ‘44 he more than made up for with a huge laying down of tracks including Put Your Dreams away, his theme tune for the time. This enormous output became known as his Columbia years.

Axel Stordahl left Dorsey at the same time and became Sinatra's chief arranger during these Columbia years and the numbers such as These Foolish Things, You Go To My Head, and  That Old Feeling defined the era.

His success continued until 1948 but his style was not evolving, and the first suggestions of his association with organised crime garnered negative press. His workaholic style - up to a hundred songs a day - had taken a toll on his voice and depression set in. His divorce from his first wife Nancy and his stormy affair with Ava Gardner added to the downward effect. To many he was washed up, finished; even his record company didn't help, getting him to record some banal songs. His record contract was not renewed in ‘52, his TV show was cancelled and he was dropped by his agency !

During all this time Sinatra had been acting in films. I am not the only one who during that period thought he was a very good actor in the right films and he was. The passage below is a cut and paste on his film career, I shall stick to the music in my subsequent comments.

“Sinatra appeared in several films throughout the 1940s, the best among them being the musicals in which he costarred with dancer Gene Kelly. Of these, Anchors Aweigh (1945) and Take Me Out to the Ballgame (1949) are pleasant diversions, whereas On the Town (1949) ranks among the greatest of film musicals. It was acting, rather than music, that precipitated Sinatra’s comeback in 1953. He pleaded with Columbia Pictures president Harry Cohn for the role of the scrappy, tragic soldier, Maggio, in From Here to Eternity (1953), and he agreed to work for scale. His performance was universally praised and earned him an Oscar for best supporting actor. Sinatra went on to become one of the top film stars of the 1950s and ’60s, and he delivered fine performances in quality films such as Suddenly (1954), Young at Heart (1954), The Man with the Golden Arm (1955; Academy Award nomination for best actor), Guys and Dolls (1955), The Joker Is Wild (1957), Pal Joey (1957), and Some Came Running (1958). The political thriller The Manchurian Candidate (1962) is perhaps Sinatra’s greatest film and features his best performance. With the possible exception of Bing Crosby, no other American entertainer achieved such a level of respect and popularity as both singer and actor. Although it is said that Sinatra stopped taking films seriously after The Manchurian Candidate, owing to his ongoing frustration with the tedious filmmaking process, his motion-picture résumé remains impressive. In later years, he was memorable in The Detective (1968), and in his final starring vehicle, The First Deadly Sin (1980). “

In 1953 Sinatra signed with Capitol Records and an era started that many consider to be his most fruitful, nine years of probably his most important body of work. Many of his albums were on a single theme and called concept albums: his first with Billy May, Come Fly With Me  1958 and  Come Dance With Me 1959 are the stand-out ones.

But it was the two decade long association with Nelson Riddle, whom Sinatra said was the greatest arranger he worked with, that produced at least three albums considered by most to be masterpieces: In the Wee Small hours 1953, Songs for Swinging Lovers 1956 and Only the Lonely 1958 all are musts for any serious collector of modern music.

Sinatra also collaborated with others beside Nelson Riddle. He sang with all of the best of the era - Basie et al. This, The Best is Yet to Come with Basie shows all the skills Sinatra had at his disposal, tonal range, timing, projection, diction etc a masterclass that today's singers in the main could only dream of.

It wasn’t all ‘smooch,’ far from it: this upbeat Day in Day Out was typical of his racier numbers this from 1967 with a slightly Latin flavour.

His “Rat Pack Years” mainly while doing the rooms in Las Vegas had a free-for-all style, not surprising considering his company with Dean Martin, Sammy Davis junior plus to a lesser extent Shirley McClaine, Joey Bishop and Peter Lawford. It was an act based on comic boozy fun, mostly ad-libbed and very successful. A good example of the period is this number, not at the Sands where most of this act was performed but in St Louis with the added attraction of Johnny Carson thrown in:

Sinatra founded his own label Reprise Records in 1960 whilst still on contract with Capitol until ‘62; Capitol allowed the two to run until their contract ran out.

He still worked with his original arrangers but new blood was brought in: Neil Hefti, Don Costa and Johnny Mandel injected new ideas to Sinatra's work.

Several hit singles were generated during the Reprise years including Strangers in the Night (1966) That's Life (1967) and My Way (1969), plus two of his best albums: September of My Years (1965) and the collaboration album Francis Albert Sinatra and Antonio Carlos Jobin (1967).

This is Wave with Jobin, a dip into Bossa Nova by Sinatra.

By 1969 another generation had taken over the music world and Sinatra said ‘They are not writing songs for me any more’. In ‘71 he announced his retirement only to start recording again in ‘73. In his last years he “only” produced seven albums but many were his most poignant, culminating with his last Duets 11 in ‘94.

His voice was suffering in these later years, more coarse, largely through his life of cigarettes and drink, but he compensated and could still deliver.

Here he is with Ella, these were the days when ability and talent actually mattered; sadly, as with those wonderful big bands, now all history:

Despite no more recording and failing health Sinatra did not retire, he performed at hundreds of live concerts all over the world. I am ashamed to say I lost the chance to see him live at the end of his career at the Docklands arena after a mix up with dates. To live through the Sinatra years and enjoy the decades of great songs with great composers and arrangers and then miss the last chance to see him live has always grated.

Still, the sound is there for many more years. He like his contemporaries were supremely talented and above all professionals, a golden era. Fittingly the last number is That’s Life:

Love his songs. Hate his cowardice, pettiness and aggression.