One way in which the voting system is skewed is the disproportion between the size of the electorates in our member nations and number of their seats in the national Parliament, as discussed in the previous piece.

Overlaid on that is a difference in turnout (which in itself may be an indication of other inefficiencies in our system of representation that dissuade many from involving themselves at all). So the results in the 2015 General Election show that Welsh and Northern Irish voters returned more MPs per vote cast, if one can put it that way: 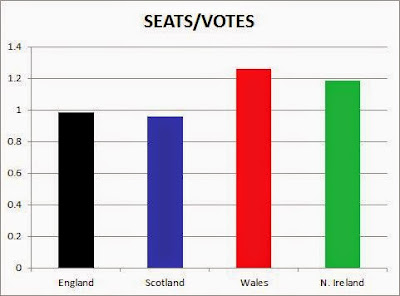 Within the nation-regions, Party voters are unevenly distributed and this leads to a bias in results under "First Past The Post". That bias varies regionally, again reflecting the uncomfortable compromise between local and national loyalties. In the charts below, equitable representation would score a 1.00 ratio between overall votes obtained and seats gained: 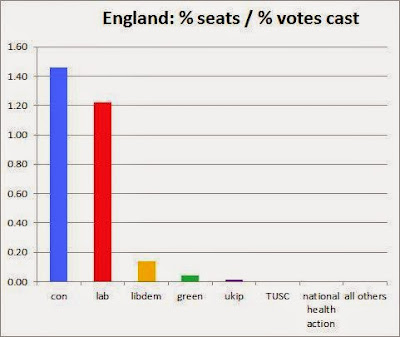 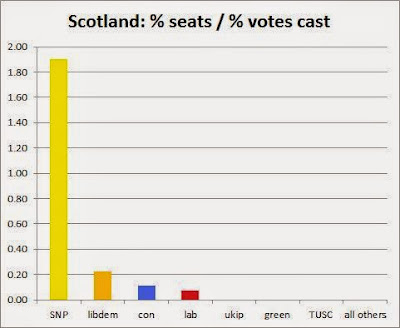 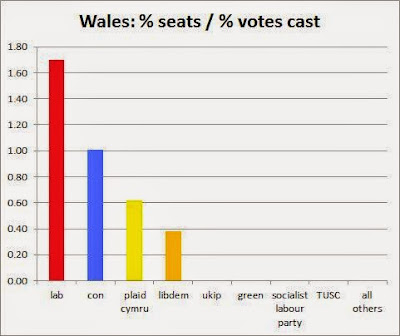 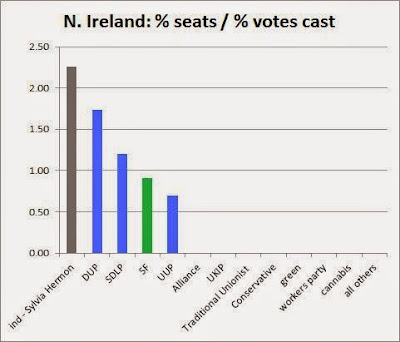 An independent MP (and we have only one in the UK!) will score highest of all, since all her votes are concentrated in one constituency.

And that leads us on to another conflict: are we voting for a political party or a person? Opponents of the political-list system like to stress the connection between the local MPs and their constituents. But in a "safe" seat it seems that only the rosette matters and candidates can be parachuted in from Central Office. Or (as in my former MP's case) switched to a safer neighbouring constituency when boundary changes threaten his effortless security.

Looking at the UK as a whole, we see a bizarrely skewed result, reflecting inequalities in regional seat allocation (average size of constituency), turnout, and geographical distribution of party voters: 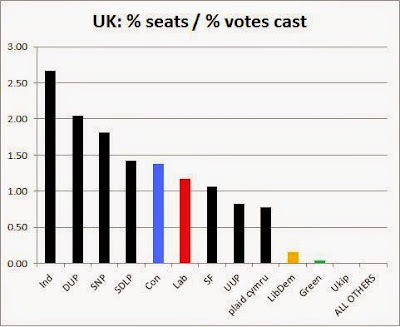 This has worked heavily against certain minor parties: 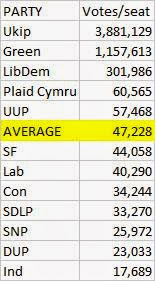 It is said that the current system allows us to have majority governments (and to throw out ones we don't like).

But this is at a cost: we have (in my opinion) been misgoverned for many decades by parties who have an eye on the swing voter in the swing seat, who often pursue policies that the majority greatly dislike (and that may be harmful and foolish), and who are happy to see large numbers of the electorate become completely disconnected from the process of (alleged) self-government.