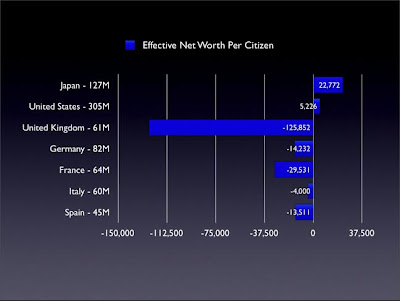 Here's one way to calculate it (htp: Burning Our Money): GDP less debt owed to foreigners, per capita.

But there's also total debts (foreign and domestic) compared to GDP, in which case the US owes 4 times what it earns, and goodness knows exactly what the equivalent is here in the UK.

And then there's future liabilities - pensions and healthcare costs that have effectively been promised, and will have to be paid for decades to come. The US Comptroller General, David Walker, has been touring the US for two years like Cassandra of Troy, trying to alert the public about this. His latest reported estimate is that these promises are equivalent to a lump sum debt of $53 trillion, and rising annually by $2 - $3 trillion.

It's an unholy mess, on a scale so large that even approximate calculations seem almost irrelevant. However, I strongly suspect that it is a misrepresentation to say that the problem is principally American. If only the truth were made plain - but those in the best position to say, have the greatest incentive to remain silent, or to mislead us.

Good post. What a frightening graph though for us Brits...I keep trying to get through to people that the line that it all originated from America and the banks and that Labour had nothing to do with it to my family/friends but they just see me as some deeply biased and rabid Tory. Like 'na-na-na-na we can't hear you'.

Without sounding patronising, how do you get the truth through to the sheep who just accept whatever line the MSM give to them?

What gets me is no one has touched on the concept of cutting public spending yet.

TBRRob: public spending was the way out in the Depression, so what do we do now? If you take aspirin when you feel good, what do you take for a headache? If you sack a million public sector workers you save on wages, but then what about the cost of their SoSec benefits (and healthcare because of the health effects of unemployment, and extra policing/judicial costs etc)? Just for a start, I think the banks should be busted good and proper, to destroy the excess liquidity and punish the criminal banking fraternity.

What worries me is the only way we got out of the 1930s depression was to liquidate the assets it had taken centuries to accumulate, and spend them on making ships, planes and tanks, which we then destroyed at a very rapid rate in WW2. The creation, destruction and replacement of all that material stimulated the world economy enough to lift it out of the slump.

So is that likely again? A huge war to boost the economy? For one thing, we don't have the assets anymore to pay for it, nor do the Americans. The only people who can afford a big war are the Chinese, Arabs, and possibly the Russians. Only the Russians, the Chinese and the Indians have the manpower. So my prediction is a Sino-Russian, or Sino-Indian, war, with whoever fights the Chinese being bankrolled by the Arabs.

Let them get on with it, I say. We can sit on the sidelines and produce the weaponry. We can play Switzerland in this one.

The future liabilities are what worry me. Putting future generations in hock is short termism at its worst. There is sucha concept as our children and our children's children - not just knackering the incoming opposition PM.

> TBRRob: public spending was the way out in the Depression, so what do we do now?

Public spending and other interferences turned a recession into a depression.

Sobers, ACO - I think ACO may well be correct - I read recently that GDP per capita did not increase as a result of the war years. James, agree on the intergenerational inequality.

Firstly - the graph neglects the asset position against which the debts were secured. You would never see a company financial report which didn't balance the debt against the assets.

Secondly, there is no indication that the assets would be transferred to the foreigners if the debt went unpaid. It seems the debt was largely insured packages of debt instruments - so its the foreigners that lose out because they are likely to find that both the debt AND the insurance defaults. Bit like selling a car I don't own with a guarantee that isn't worth the paper its written on to a Chinese mug that didn't speak much English.

Its the Chinese that are really going to get roasted as the value of the cash instruments they are holding are declining at a precipitous rate, people are being flung out of their jobs, the Yuan wants to rise but is being held back by a government scared of the inevitable unemployment and the population are becoming restless. The Chinese and the Arabs seem to have had an appetite for precisely the type of debt that was most likely to default. The Chinese tend to turn in on themselves in such times.

China is going to get flattened just as Japan before it, the Pacific rim before that and Latin America before that. I'm guessing that India will be the next on the boom to bust trail.