Currently I use Windows, like most people, and my experience of this is certainly like the picture on the left. No wonder there are so many Bill Gates jokes, e.g. "The president of Lotus walks into an elevator with a gun in his hand. In the elevator are: Saddam Hussein, Timothy McVeigh, and Bill Gates, but there are only two bullets in the gun! Who does he shoot? A: Gates, twice, to be sure."

I also have an ASUS laptop that has a nervous breakdown when I ask it to connect to the Internet and my printer at the same time. In fact, it's now objecting to my mouse as well. I half-suspect the power management system is compromised by some ASUS virus that informs Peking of my every keystroke; put that down to paranoia if you like, but we'll see what the history books say one day.

But is the Mac really as simple and reliable as the middle picture suggests? And is Linux really so powerful and jazzy? Before I throw this computer from some carefully-selected high place, I'd appreciate guidance on its replacement.

By the way, here's Daniel Bozet's original cartoon; I thought the one above looked unbalanced. 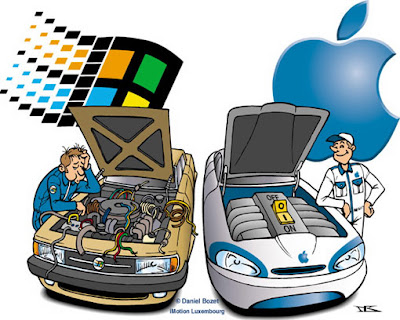 And here's some techno comment on BoingBoing, that obviously I don't quite understand.

If telephones were like this, I'd be using liveried runners.

Macs are the best!!
I have been using them for years, and every morning when I walk into the office and log into my Windows box, I want to cry :-)

pej does not exaggerate. I was on the verge of giving up on my home PC, having concluded that life was simply too short to spend on fighting viruses and coping with Windows' manifold idiosyncrasies.

Windows is designed by engineers for people with no lives and no aesthetic sense. I would never use it without 24/7 tech support (as I have at work - and even then I still hate logging on).

Having moved over to Macs at home, my computer has become what it should always have been, a reliable tool for the things I want to achieve in my life. Even my IT support brother-in-law, who makes his living supporting Windows, has moved over (on the basis -initially- of watching how a new Mac asks for the old one to be connected so its data and settings can be transferred - and then just does it).

Just incidentally (although Windows puritans suspect this is all that it is) a Mac and Mac OSX are also aesthetic delights.

I had an uncle once who so loved messing with cars that the traded a reliable one for an East German Wartburg, so he could spend his weekends tinkering. If you have that mentality, stick with Windows. If you like your car to fire up when you turn the ignition key, get a Mac.

One additional thing:
- if you spend 99% of your time in Excel, then maybe switching to Mac is not such a great idea, because Office 2008 (for Mac) is really crap.
- I use virtualization software (like Parallels and VMWare) to run Visual Studio and Excel on my mac and limit the Windows usage to that.

PEJ, I do use Excel a lot, though. Can I transfer data from Mr Crappy to Mr Easy-use? What pronloems are there with the Mac spreadsheet?

And what's the word on Linux?

Just to throw a spanner in your engine, Husband, who works in IT, reckons MACs are for nerds who like gimmicks.

That said, we have 3 old cars that we both prefer to the modern ones ...

Hi, Liz! Don't me started on cars, I'm nursing a Fiat Brava at the moment - only because some toerag stole my old Vauxhall Astra.

well, basically Excel2008 for mac is like Windows ME: very slow, crashes all the time, and you can do VBA nor use addins!!!!! useless rubbish!
But excel for windows works like a charm in virtual mode.

Downside would be that after using a pc for so long, your mind is totally twisted, so you will try to look for some very complicated way of getting things done with your mac where the solution is super easy ;-)

downside: you might need to reboot your mac to windows to play the latest games. I don't play :-)

I wonder about switching next time, but besides price it's learning another new thing that puts me off.

Yes well we all hate them but do you want to go back to the pre home computer days? I don't think so. Our first home computer was a Northstar Horizon with no hard drive in the early 80s. We've come a long way baby.

I used to be a Mac user and remember the pain of swapping to a PC. Nothing was intuitive any more, or was intuitive only to an autistic non-English speaker.

JMB: I started with the early Amstrads - the Sinclair Spectrum and, I think, the one before it. Should have kept up with developments after that.

DM: Microsoft's predominance is like the victory of VHS over Betamax, even though (I understand) Betamax is technically superior and is what TV companies used.

Basically, with Virtualisation (some software) you can run Mac OS X and windows and linux at the same time, without noticeable performance issues.

I am lucky I know quite a few techie people. For my current PC I decided what I needed and my brother built my it for me, then I loaded all the software myself.

Pej - sounds wonderful, I'll have to get someone to sort this for me.

Cherrypie - boasting! Just because I'm a two-finger typist and non-techie.

Check these, it's super easy to set up (you need to basically know how to install Windows...)

You need a Mac, and install Parallels if you want to continue to run some Windows software.

I have Windows at work, my wife has a Windows laptop, I have a Mac laptop (G4 iBook) and a Linux laptop, (Arch Linux), and desktop (Debian).

Linux leaves me in control, but I work in IT and have been using it since 1993, (v0.98 of the kernel). I built a machine running Ubuntu for my parents - but they can always call on me if they need help.

Windows is a nightmare.

At your level of IT (in)competence you need a Mac.

Thanks, WG, that was very useful. I just want to drive - I'm not the type that has three cars in pieces on the front lawn.