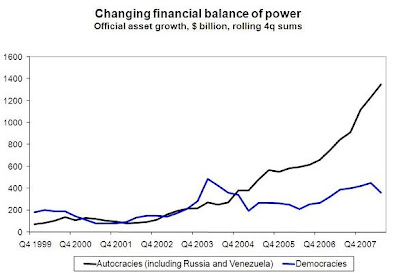 I've said before now that 2003 was the year the UK and USA blew it, with reckless credit expansion.

How is it that democracies worked in the past, because the USA and the UK did pretty well up until the first world war? I think it's universal suffrage that's the problem.

Early forms of democracy, in which voting was usually restricted to those with the most power and largest stakes in society, were much better. The potential folly of individual kings and despots was replaced by the wisdom of a ruling elite with a common goal.


It's only in advanced democracies with universal suffrage that things go so badly wrong. The perceived self interest of many voters no longer coincides with the success of their country, and only slick con men and charlatans who have the skills and the ruthlessness to exploite this, like Bush, and Blair ever make it to the top.

On recent performance I'd happily appoint Putin and Medvedev as our leaders. They may be rather unpleasant individuals, but having risen to the top in a "first stage" democracy they have a clear remit to serve the interests of the Russian elite, and have been playing a blinder over the last year.

It's probably the combination of universal suffreage, the welfare state and fiat currency that makes ruin near certain. Though you can get quite a long way with ruinous wars (e.g. WWI for Britain) or incompetent central banking combined with authoritarian government (eg Hoover & FDR USA)

How to redefine democracy?

This isn't me, it is, of course, Morgan Forster, but he says it better.

[ Democracy] is less hateful than other contemporary forms of government, and to that extent it deserves our support. It does start from the assumption that the individual is important, and that all types are needed to make a civilization. It does not divide its citizens into the bossers and the bossed - as an efficiency-regime tends to do. The people I admire most are those who are sensitive and want to create something or discover something, and do not see life in terms of power, and such people get more of a chance under a democracy than elsewhere. They found religions, great or small, or they produce literature and art, or they do disinterested scientific research, or they may be what is called "ordinary people", who are creative in their private lives, bring up their children decently, for instance, or help their neighbours. All these people need to express themselves; they cannot do so unless society allows them liberty to do so, and the society which allows them most liberty is a democracy.

Democracy has another merit. It allows criticism, and if there
is not public criticism there are bound to be hushed-up scandals.
That is why I believe in the press, despite all its lies and vulgarity,
and why I believe in Parliament. Parliament is often sneered at
because it is a Talking Shop. I believe in it because it is a talking shop. I believe in the Private Member who makes himself a
nuisance. He gets snubbed and is told that he is cranky or ill-
informed, but he does expose abuses which would otherwise never have been mentioned, and very often an abuse gets put right just by being mentioned. Occasionally, too, a well-meaning public official starts losing his head in the cause of efficiency, and thinks himself God Almighty. Such officials are particularly frequent in the Home Office. Well, there will be questions about them in Parliament sooner or later, and then they will have to mind their steps. Whether Parliament is either a representative body or an efficient one is questionable, but I value it because it criticizes and talks, and because its chatter gets widely reported.

So two cheers for Democracy: one because it admits variety and two because it permits criticism. Two cheers are quite enough: there is no occasion to give three. Only Love the Beloved Republic deserves that.

They are winning but am not in a position to comment currently :)

Thanks, HG, I was beginning to worry that we'd all somehow agreed to give up the franchise as a bad idea. Don't know if MPs generally do have much interest in the constituents, mind; not now that they've discovered how much they can get away with.

This is an oil question.

God gave the oil to a load of countries who were not existing democracies - and, having weighed up the pros and cons of new oil billions for a milisecond, the elite of those countries decided to stay non-democratic and to shower upon themselves much luxury, whilst keeping the camel herders happy with the odd new football stadium and hospital.

Didn't America used to have a lot of oil, until it drank it all?