A very interesting, concise post from Mish. He says deflation forces borrowed money out of speculation, so gold and silver will drop while this happens; but then - it could take some time yet - will come the rise: "The reason gold will reassert itself is that Gold Is Money."

Mish's line appears to be consistent (June 2007):"Typically gold is a counter-cyclical asset that does best in real terms when liquidity evaporates."
Gold seems unpredictable - the demand for it as jewellery is unrelated to price - but if his chart below is correct, there is an underlying trend of steadily increasing demand. New gold mined each year is only some 2% of the total still available above ground - gold generally doesn't get used up (though I have drunk Danziger Goldwasser) - so the supply cannot be easily boosted by the State in inflationary times.
Gold, or paper? Your choice. 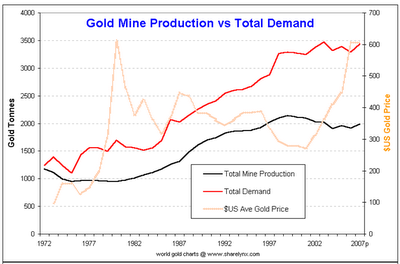 "Gold is money", nope anything that is a proxy for peoples time can be money, see paper/electrons.

Yes; but it's harder to multiply gold.

I'd never herad of vodka laced with gold before. Dose one still put cola or lemonade on top of it?

Sacrilege! You drink the sweet, viscous, precious stuff on its own.

Too much Bear Stearns and not enough bare sterns... sorry, my attention must have wandered.