Handy-dandy, the pigs are the farmers

Place your political parties in the schema below: 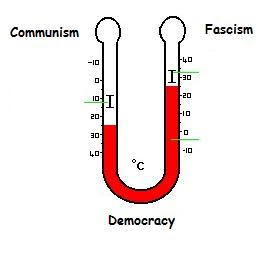 At first, I wondered what Hatfield Girl was talking about. Now it's one of the news headlines on the morning radio, and in the papers: the Government has taken to arresting members of the Opposition, like tinpot dictators in faraway countries that it's difficult to believe really exist.


Difficult to believe; that's part of the process. Honestly, I have felt since 1997 (and I am no natural Conservative voter, please believe me) that something was obscurely wrong, that we were all inside someone else's dream. It's like that feeling you get that you've forgotten something, but haven't a clue what it might be.


Before 1997, the Government was Them and we were Us: British, muddling through, ready to heave a brickbat at these clowns who pretend to rule us, but all of us bound by habit and tradition. But in Tony Blair's revolution, the Government claimed to represent all of us: it was the political wing of the British people as a whole, or some such typical Toni verbalfluff.


This is how Nazism took hold - and my mother lived through it. No need for the unions, we the national socialist State represent the worker's best interests, etc.


Fascism, Communism - it's all the same, structurally.

Sounds to me like David Icke was right all along:

That is a great picture, sums it up nicely.

Fascism and communism are sometimes the same people. In the US, the neocons that believe in the dominion of the world by the US (look up Dominionists), started out as Marxist-Leninists under Leo Strauss (I thin that's the name).

Given my nature and upbringing, I have always chaffed at anyone but family knowing what's best for me.