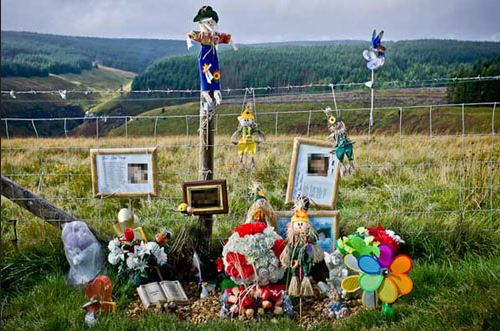 I wrote a piece about this subject some years back, but an article in the local paper revived the memory of that piece at a time when I had imagined the ‘fashion’ had died a death !

I don’t like stereotyping people but sometimes they do it themselves. I can honestly say I don’t know anyone who would build a roadside memorial and have never really understood who they are for.
The drivers going by will no doubt be 99% oblivious to whoever the memorial was intended for and if it is only for the family or close friends would anyone trek to a green verge on a regular basis when even visiting a cemetery is a rare event? - well, certainly in this country which makes it even more puzzling.

The piece I wrote long ago was prompted by a stretch of road running from Cambridge to and past Haverhill in Suffolk, that had a bad record for accidents and deaths, being one of those single carriageway roads that should have been updated many moons before. It also sported a wide grass verge for some miles and this became a natural draw for the monument builders.

Among the more inventive ‘art works’ were a small mountain of soft toys; this one was allegedly for a deceased 25 year old biker ! A masterpiece of kitsch which had a small cupola with an angel inside on a mound surrounded by more angels, a lantern and a shepherd with dog ! A cement scroll, no idea what was written on it and topped of with several hand held windmills - a favourite of these shrines - several nondescript tacky ones incorporating foils as the backdrop, one with a foot high name stuck on it, and the most ghoulish one, a two-foot-high coloured photo of the unfortunate who was killed on this spot. Facing the oncoming traffic it was regularly replenished with fresh flowers; that one survived for years !

All came to an end after numerous complaints saying they were a distraction making the road even more dangerous and after protests from the bereaved they were all removed, something that at the time I remember being done at various sites across the country as the craze got out of hand owing to the efforts of the memorial builders to outdo one another.

We have a bridge over the motorway, I am being generous with that term in this case, near us: a road that is much in demand for the late night bikers who thrash their Japanese super bikes at unmentionable speeds up and down this road at weekends unhindered by the total absence of any Police traffic patrols as is normal these days.

Two have managed to kill themselves in the last twelve months or so and large displays of flowers and the odd obligatory teddy bear with cards of condolence went up on the bridge. Neither was ever removed for fear I suppose of being labelled ‘unfeeling’ as is the way these days, so they were left to rot. One is still there after months, looking like a cross between a bad day at the florist's and a recycling yard.

This all comes back to the piece in the local paper. The first reading of the article gave the impression the memorial was in a graveyard and you had to read on some way to realise it was another roadside “attraction” and in this case that was probably a factor in why it had been vandalised. However "vandalised" was used by the journalist in a form of poetic license as further reading after the sister of the deceased (seen in photo with pink hair and described as a tattooist !!) described the vandalism as "cut wires". It appears the memorial surrounded by tree lights was powered 24 hrs a day by a solar panel, all on the edge of the grass verge facing oncoming traffic. Such a distraction would not have lasted five minutes years ago as it contravenes so many road laws, but today anything goes and the attention-seekers under the guise of grieving parties win out so the lights are repaired, the bereaved tattooist gets in the papers with her pink hair and all is well again in the world of those who must be noticed.

If I sound callous so be it, as in real life I have never known anyone who gives that much time to grieving so long after the event. Some societies, Italy and Spain are good examples, do pay more respect to the dead long after they have departed; how much of that is genuine grief or a culture of habit I could not say, but in this country until a few years back it never existed. Now it has become a cottage industry in self-promotion; some poor sod gets his fifteen minutes of fame through dying and all those associated climb aboard for a piece of it.

Readers may recall that Spike Milligan wanted "I told you I was ill" on his headstone at St Thomas' churchyard, Winchelsea, but the Chichester diocese refused to allow this epitaph.

Instead they allowed a Gaelic inscription: "Duirt me leat go raibh me breoite", meaning...

It sounds like another silly habit that made its way from here in the US.

I am not sure it is habit introduce from the US...
However I know several people who hold onto their grief...

And do not move forward.