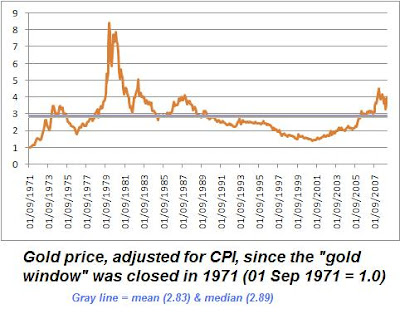 Gold's price since President Nixon closed the gold window on Aug 15, 1971 has been generally higher than in the era up to then, but still very variable. If we adjust it for inflation as measured by the Consumer Price Index (CPI) in the USA, and take September 1971 as being a "1", the mean and median values since then are of the order of 2.8 - 2.9.

Currently the gold/CPI ratio is about 4, which is somewhat above trend, though nowhere near the spikes of the early 80s. So I'd regard gold's price as a bit high for getting in now, unless you're speculating, which is not my game. But if you got in 9 years ago, well done, and I guess you'll want to hold for some time yet.

is there any other reason for holding gold ? It has no coupon ...

I suppose there might be some situations where gold is truly a hedge for something - but there can't be many. When (e.g.) I say - as I do - 'gold is a hedge for bad news' I mean it only in the loosest sense

Hi, Nick. By speculating, I mean buying high in the hope it'll go higher if/when everyone else panics. Buying significantly below the long-term trend I'd see as a long-term investment. Hope I'm not being too Humpty Dumpty about terms.

Well I've taken the plunge - spoke today with a contact in the trade about buying some physical gold. For me its an insurance policy - I hope I never need it. I'd be quite happy if my investment went down in value because it would mean the rest of my investments would still have value (ie shares/cash in the bank). If push comes to shove I want a little bit of 'wealth' I can count on, not just a bit of paper.

Not a bad spine to hold up some of the flesh, Sobers.

Damn, Sackerson. I nearly spit up my Dr. Pepper re: sobers.

Anywhoo, you might want to check out my thoughts several weeks ago:

Nick Drew: "is there any other reason for holding gold ? It has no coupon ..."

How about: No counterparty risk?

By the way, where today can you get any sort of coupon?

Silver is the better one IMHO.

When you need gold, silver is much better.

I note the gold:silver ratio is extremely high, ACO.

Chuck: will take a look.

Chuck (again): I've looked, you agree it's a bit high. But that may be a price worth paying if everything else plummets. If 1980 comes back, it's double your money time. And if it doesn't, you could make a good big ring, a torque, cloak clasp etc - let's get Dark Ages again. Wealth you can wear - that's intrinsic value.

point taken, but I'd also note

(a) unless you plan to keep it literally under the bed (in which case there are one or two other risks ...), you are exposed to default by your custodian - though there are some pretty secure arrangements on offer

(b) several folks who are 'investing in gold' turn out to be using ETFs or spread bets or other 'virtual' vehicles, which are by no means divorced from counterparty risk: (several of them were insured by AIG, for example !)

That said, I am long gold myself. But I have this firmly categorised as speculative. Just MHO, of course