RT.com tells us that a new port is to be built at a little settlement called Indiga, on the shores of the Barents Sea.


The story is that it will be needed for exporting coal, and will need a rail link between there and Surgut in western Siberia:

"The annual cargo turnover is set to reach 70 million tons, 50 million tons of which will account for coal shipments, extracted from Russia’s biggest coal mining area in the Kuznetsk Basin, located in southwestern Siberia."


This begs the question, why put all that effort into new northbound rail and port construction, when the Trans-Siberian Railway runs in the area, connecting East to West? 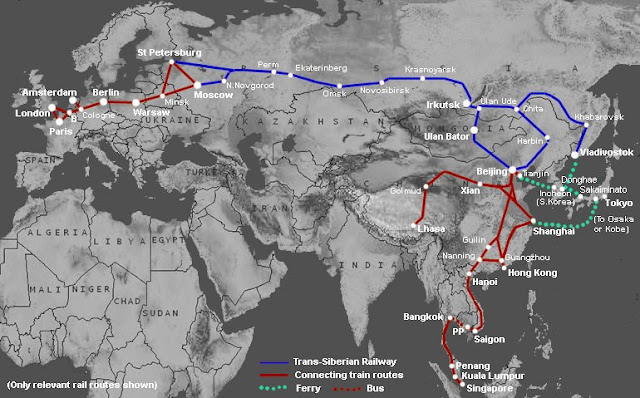 In fact there are already discussions going on between Russia and Japan for using the Trans-Siberian route for freight transport, possibly all the way from Moscow to Vladivostock, saving up to 40% in costs compared with current sea and air routes (see RT story from 20 August this year.) The city of Leninsk-Kuznetsky is somewhere within striking distance of that railway.

Surgut is rather further north. But it is a leading oil and gas town and the first RT article says that Indiga was to have been used for exporting liquefied gas. Rosneft didn't get the permit - but is this a possible comeback, for them or some crony of the Red King?

There may be wider issues. The Arctic Ocean is expected to be largely ice-free in another couple of decades; Russia is going to get her all-year-round ocean port after all.


That will be useful for exports.

Or imports? There is a tussle going on for control of mineral resources in the ocean. Using international law, Russia is trying to claim that its continental shelf gives it rights up to the North Pole.

Or is there a longer-term plan relating to the Eurasian Union (a sort of Eastern EU)? This has been cooking for five years. In which case the theme is not so much East-West trade as Russian-centred North-South trade:

I suggested back in 2014 that the Russian leadership may have been using the Olympic developments at Sochi (etc.) to bolster its defence capabilities there. Having taken the Crimea, they now see the Black Sea as essentially their pond; and unfortunately the Ukraine appears to be trying the Russians' resolve (though at whose instigation is anybody's guess. (UPDATE DEC 1, 2018: there may be a clue here - US "classified Contingency Operations" - https://off-guardian.org/2018/11/30/us-military-contractor-is-hiring-personnel-to-support-classified-contingency-operations-in-ukraine/)

Unlike our British Government, which appears to be unable to think further ahead than the next Party Conference, the Russians may have an Oriental capacity for playing the long game and covering their intentions.

So, coal to the Arctic? Doesn't quite seem to explain it all.