With all the wonderful political capital afforded by the "Russian menace" in America and "the U.S. menace" America, let alone China, it's as well to remember that imperialism never died - it's been going on in the modern era since at least the 1700s.

The French in the New World of America, the Spanish, the French sniffing around Australia and beaten to it by the British in 1788, the Dutch there also on the other coast a century earlier, the Chinese ten years ago in Africa - it's going on the whole time, as the Germans can attest.

In my time in Russia, the British were "known" over there for using the British Council for its purposes and I was caught up in the wash in 2008 when the BC was expelled from Vladivostock.

And so it goes on and on.  Exxon in Sakhalin is another example.

This one below is from the heart of "the enemy", the European Council on Foreign Relations and I'd say it's par for the course:


The murder of three Russian journalists in the Central African Republic in July 2018 raised new concerns about Russia’s presence in Africa. Because the reporters were investigating the activities of Russian private military contractors (PMCs), there has been widespread speculation that they were killed at the behest of a Russian state determined to expand its presence on the continent. This explanation is plausible: after years of irrelevance in resource-rich but politically unstable central Africa, the Kremlin has heavily relied on PMCs – a cost-effective and efficient tool for hybrid confrontation – in making its return to the region.

Putin publicly supported the creation of mercenary groups in 2012 but, officially, they remain illegal in Russia. Although the Kremlin refuses to acknowledge their existence, PMCs have become an essential tool of Russian foreign policy. This has been apparent in both the Ukraine conflict and the Syrian civil war. By employing irregular armed groups, Moscow has gained the luxury of plausible deniability: the ability to simultaneous be and not be party to a conflict, thereby escaping public accountability for casualties of war. The Kremlin’s response to the decimation of a Wagner Group unit in Syria in early 2018 provides a good example of this.

I could equally write of the US and NATO in the Ukraine through their puppet Poroshenko - let's be evenhanded here. And now we have the spectre of the EU Army: 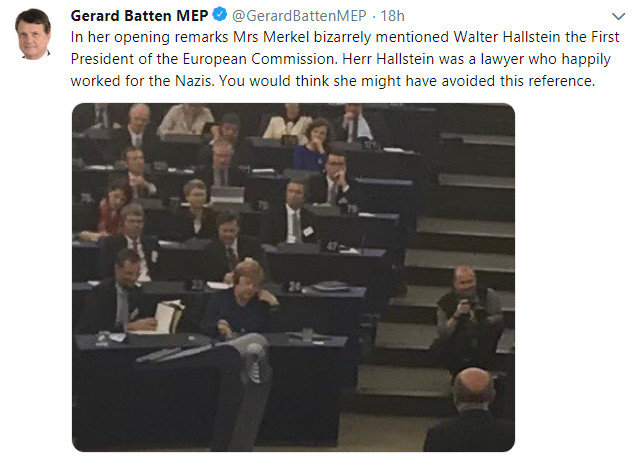 It rather undermines talk of the nationalism versus patriotism which Macron went on about on the 11th at the Arc de Triomphe, surrounded by flags and the military.  It's not my intention to get into party politics in this post, only to point out that nationalism and imperialism has never died and all the EU is is a new artificial nation, not unlike Belgium, its headquarters.

Sackerson sends these two links which delve into this matter of the Merkel Army:

Or does [Frau Merkel] mean merely to start it off as that until the EU is a full nation and can indeed boast its own national armed forces?

Alerted to it by John Vasc's 02:02hrs comment on Raedwald

I see on angle on the story is that Trump wants this:

If you care to enquire for me at
admin@campaignforanindependentbritain.org.uk with your email address,
I can forward you a speech by Professor Hallstein (as he then was), delivered
at a Nazi rally in early 1939 on the subject of harmonisation of legal
systems in formerly diverse territories.(together with contemporary newspaper report - all translated) - plus some very choice remarks about him by De Gaulle.

He was not a Nazi party member and not "high ranking" as some have said - because he was called up in 1942, after he had been promoted to a professorship and dean of legal faculty at Frankfurt.

I have asked the question as to what tune Angela would like for her Euro Army. Take you pick.