EU: Staying On Board Is Not Playing Safe 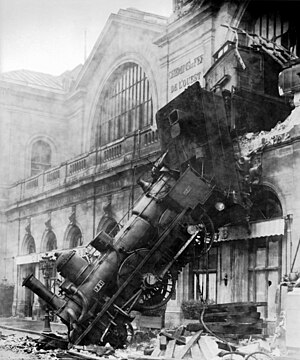 Faced with the truly awful draft Withdrawal Agreement that the Prime Minister seems determined to push onto us, some are saying "See, why don't we just stay in?"

That is a dangerous illusion. The word "remain" seems to imply staying as you are, avoiding the risks of the unknown; and in life, often a change of course overestimates reward and underestimates risks and costs, which is why 80% of new businesses fail.

But with the EU, Remain is not the option to stay safely on the platform: it is a decision to stay on the train.

And where is that train going? It is now going where it was originally supposed to go.

In the 1920s Jean Monnet began to lay his plans for a supranational organisation that would make military conflict between France and Germany impossible; first, by controlling coal and steel - the basic materials of modern industrial war-slaughter - and then by acquiring more "competences" (a code-word for "powers", used with other deceptive terms to soften the resistance from national governments and peoples.)

It is not only Britain that resisted. Despite Community discussions on military policy, France wanted to develop her own nuclear bomb; and despite attempts to harmonise agricultural policy, France wanted to protect French farming, which after WWII still employed a quarter of her working population and where the too-rapid introduction of efficiencies could have resulted in major civil disorder. De Gaulle vetoed British entry until the EC agreed the Common Agricultural Policy that used most of the Community's financial resources to sustain small French farmers. So France got what she wanted.

Britain could only get in once the CAP deal was unalterable - and the impact on farming and fishing (the incompetence of the negotiators on our side is staggering - fishing had hardly been considered!) was profound. This is not to mention the effects on our other industries, including coal and steel.

Remain supporters sometimes delight in pointing out that Margaret Thatcher herself was a Europeanist, forgetting that in earlier years she, like many others, saw the European project as essentially a trading bloc. She was prepared for Britain to play its part and fought for a rebate to make the arrangements less unfair towards us; in other words, she was trying to make the system work.

And that was reasonable, for by the early 1980s the EEC train had long been stationary at the halt of inter-governmentalism: negotiated multinational settlements.

But then, with a lurch, the train set off again. As Booker and North's magnificent study "The Great Deception" shows, in 1983 a plan was put together to unite Europe into a single nation. Monnet's dream, of which he was despairing by the end of his long life, was to come true after all. The Italian Communist Altiero Spinelli had a team draft a treaty to establish the European Union that was passed by the Parliament on 14 February 1984. There were two stages: first, the Single European Act, which was signed in 1986 and moved towards the establishment of a single market by 1992; and then the Maastricht Treaty, signed in 1992 and setting the destination of European economic and monetary union, the foundation of a new supranational State.

Maastricht was the "dolorous stroke" for British sovereignty, and recognised as such by Parliamentarians who were otherwise strongly opposed to each other:
The Maastricht Treaty was further amended over the years in Amsterdam, Nice and Lisbon, each time extending the powers of the EU. Despite the British Labour Party's 1995 manifesto pledge to hold a referendum on the European Constitution, when it came down to it the Labour Government defeated a vote in Parliament to do just that.

So the express continues on its journey towards nationhood, and not only by the establishment of a Central Bank and centralised budgetary control over member States. Two days after attending the centenary commemoration of the ending of the First World War, Frau Merkel was in the European Parliament, once again urging the setting-up of a European military "intervention unit" and saying that "we have to work on a vision to establish a real European army one day."

And it's not just the loss of British Parliamentary sovereignty that is at issue. We have little enough control over our own politicians, but at least we were able to make PM David Cameron change his mind over bombing Syria. Our history has caused us to develop constitutional restraints on the Executive - restraints it sometimes tries to circumvent by "Henry VIII" enabling clauses and the use of Orders in Council. Even if we cannot always bell the cat, we have a political culture of healthy distrust towards our rulers.

The EU Constitution, on the other hand, is designed specifically to overcome popular resistance to unification, so that its "Parliament" is little more than a talking-shop where many members merely sign in and straightaway pull their wheelie suitcases back towards the taxi rank.

Many of the EU's political leaders have had their attitudes to power shaped in a very different political culture - think of Frau Merkel in East Germany, Donald Tusk in Communist Poland. More even than our own political elite, these people tend towards the bureaucratic and authoritarian. So not only has our country joined a larger organisation (thus further diminishing the citizens' voice), but this new and still evolving superstate centralises decisions almost as though it were run by an Emperor and his court. Who will restrain it if it decides sometime - as empires always have done - to make war? To invade, to expand, to silence critics, to crush rebellion?

To stay is not "to stay as we are." Paradoxically, to leave the EU is our best chance of holding on to an imperfect status quo.