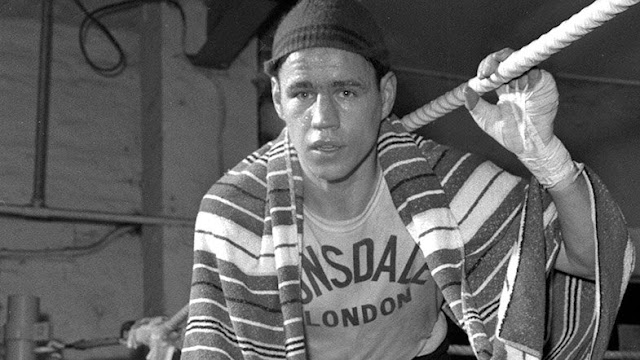 It unfailingly jogs the memory when someone you had forgotten about or presumed dead ! is actually pronounced dead and their obituary appears.

So it was with Terry Downes, a larger than life character who became world middleweight champion when that title meant something, there was only one version and when you won it you were king.

His all action style learnt whilst a marine in the States made him an instant success when he returned home and he filled the newspapers at the time with his success and his personality. Although tagged a cockney he was living in Paddington, west London in those early days and never actually ventured within the sound of Bow Bells, but his accent said otherwise and it was a trade mark of his to use rhyming slang. His career was blighted by a propensity to cut easily and in those days they did not stop fights as today and he ended in some looking as though he was in a slaughter house, his “perishing hooter” being the main culprit.

He was one of the few people who beat Sugar Ray Robinson; Robinson was past his best and Downes said at the time “I only beat his ghost.”

Until his death he was the oldest remaining world champion, and unlike many of his ilk he was shrewd with his money, owning a chain of betting shops that he later sold to William Hill.

In those heady early days after his retirement from the ring he appeared in many films in cameo roles being instantly recognised, such were his characteristics.

Why am I writing about him? Not my sport but at the time he was a huge star in sport and as a nation we were hungry for sports idols and he filled that bill plus in the early sixties.

Behind the scenes he did an awful lot of charity work for which he received the BEM.

And later in the eighties I met him by chance. I was working unknown to me two doors away from his home in Mill Hill north London, a large pile and grounds with a putting green. One day we were out front when he arrived in his Rolls Royce that did not have standard paintwork. A couple of my boys stared at this car and when Terry got out he said “Like the paint?” and a short conversation took place. He was what he was, no side, a bit flash but didn’t care.

He sold the house later for a large sum for redevelopment on the large plot and that until the announcement of his passing was the last I heard of him, a one off from a different and ever more distant age.

As the picture above shows he was more Rocky in real life than the film could ever be; the last paragraph from his autobiography sums him up pretty well…….

“I’ve lived the life I wanted, been blessed with a good family, done all the things I ever dreamed of, from birds to booze. I haven’t got a lot of money but I haven’t got to go out and get any. I’m too old to alter. Accept me as I am.”