Exhibition Road was an accident waiting to happen

We were there yesterday morning, before the minicab hit eleven people outside the Natural History Museum, and remarked even then how unsafe Exhibition Road felt.

We were visiting the V&A but came before opening time, so strolled up the road past the NHM - already there was a long queue of families waiting to get in there; it was much longer when we came out of the V&A after noon.

For most of its length, Exhibition Road has no curb (so much for "car mounted pavement" in the Guardian and Daily Star) or traffic lanes. 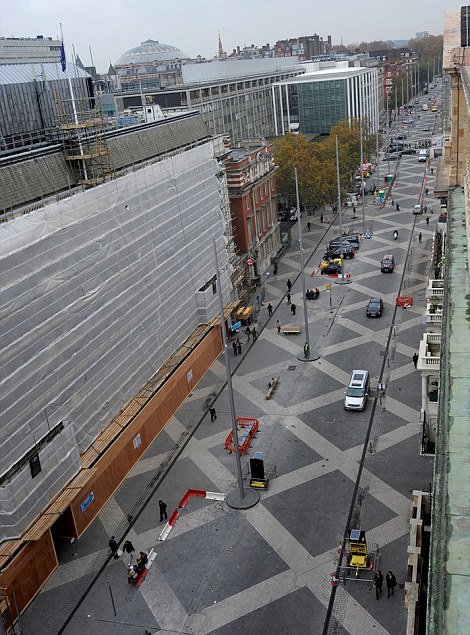 What look like "pavement" demarcation lines in the above photo from the excited coverage in the Daily Mail five or six years ago are actually drainage, and now from ground level they are almost invisible, as seen in the more recent picture below:


The criss-cross pattern in the block paving seems expressly intended to confuse boundaries - and it was! The "continuous shared space" - an idea adopted from Holland - was to make "motorists take more personal responsibility for their own actions and drive more attentively", i.e. make accidents easier to happen. The same logic would have local Councils mist-spraying pavements in icy weather so that people would walk more carefully.

Whichever authorities govern the road, they have resiled somewhat from the bash-nanny approach and now there is the odd metal post and concrete flower box to give us hedgehoggy pedestrians some assurance that we're not standing in the middle of what old Brummies used to call "the 'orse road". But yesterday it wasn't enough.

There may well have been other factors in that collision; this was another one.

Not unlike when snow falls in Russia and next morning out they all go shovelling it away to leave the ice, which they then, more slowly, start chipping. People slide and fall all over the place.

I seem to recall that in Germany, if you clear the pavement by your house and somebody slips on that area, you're liable; whereas if you do nothing, nothing is your fault. So of course, most people do no snow clearance on their own initiative.