Energy Trading: Why We Need Those Big Swinging Dicks 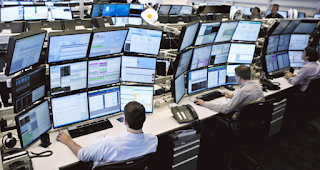 He'd seen reference to how Nicola Sturgeon was being disingenuous when she announced her new publicly-owned Scottish energy company saying it would have the advantage of not needing to pay "corporate bonuses":  but that her careful choice of words meant she knew full well there would need to be the customary big bonuses on offer to the energy traders involved.  How so? - couldn't energy trading be automated?  Might I be able to explain ..?

Well, many commodity markets are indeed already characterised by a lot of algorithmic trading.   But the gas and electricity markets are different (and also, for idiosyncratic reasons of market design, Brent crude oil at the 'spot' end of the market - though not in the longer dated, more liquid forwards).  It was once considered by some academics that gas, and still more electricity, was a paradigm case of a commodity that couldn't be traded (for "reasons" I won't bore you with, because they were fallacious).

Turns out though, it's not impossible to trade them: this was proved triumphantly by *ahem* Enron, as a pure act of intellectual conviction and commercial will.  But it is more difficult - and in the case of electricity, much more difficult. The primary reason is that in most electricity markets there is virtually no inventory to act as a buffer in the market, so that relatively slight physical events (which happen all the time, with major events not uncommon) within and around the extensive infrastructure can have a rapid and profound impact on the supply / demand balance. In those few electricity markets where there is an effective buffer - which mostly means those such as Norway that are dominated by hydro-electricity, where the buffer is represented by water stored in dams and 'ponds' at the top of the mountain - trading is concomitantly easier.  Gas suffers from a similar, though less pronounced problem of limited inventory.

A secondary (and related) reason is the 'granularity'.   Copper, for example, trades in units of one month: gas is traded by the day; and electricity by the hour, or even the half-hour.  The gas grid needs to be balanced daily; and the power grid requires balancing in real time.  There are many, many other related contributory factors besides, making gas and electricity highly dependent on more than just the usual financial principles.  In consequence, gas and electricity prices (wholesale / traded markets) are hugely more volatile than has ever been encountered elsewhere - an order of magnitude more volatile in the case of gas, and often two orders more in electricity.  Phenomena like the growing amount of intermittent wind power in the 'fleet' only serve to make this more extreme.

Until, then, the advent of that Holy Grail - an effective and efficient form of electricity storage on a large scale(1)  - successful trading in these markets requires a unique blend of classical 'financial' trading skills, plus deep understanding of the very extensive physical / infrastructure aspects and their complex dynamics.   As a rule, financial traders hate getting their hands dirty with the physical stuff; and physical specialists don't understand the financial stuff (which can be deeply counter-intuitive to the novice, even the highly numerate novice, as most engineers are).

So the winners - who really clean up - are those who can be arsed to acquire both sets of skills.   The amateurs get destroyed.  Some household-name big companies have really screwed this up over the years.  Many companies actually outsource their trading requirements to specialists - and pay a nice mark-up, but can then say "we don't need those nasty traders(2) & we don't pay those immoral bonuses".  But of course they do, really - like retaining an overseas 'agent' to do the dirty business with the backhanders.

I wonder which route the pious Sturgeon is going down?   Sadiq Khan had promised to set up a municipal energy company for London, but seems to have thought better of it which, in my view, is wise.  Keep those big swinging dicks out of sight of the innocent Scottish politician ...

(2) The traders' culture is abhorrent to the engineering culture that quite naturally dominates the energy co.s.   There are many points of conflict.  When an energy co eventually realises it needs a trading floor (and be willing to pay serious bonuses), it can cause truly dreadful frictions.  Traders and the like have been heard to call the old-timers "Dougs" - dumb old utility guys ...  and since this is a family blog (is that right, Sackers?), I won't relate what the engineers call the traders.

Not so sure about the two tribe thing ... the engineers vs. the traders...

Looking at some of the UK utility companies they seem to be quite good at promoting f-wit purely corporate apparatchik non engineer types who specialise in smarming and conniving their way to the boardroom and push competent folk (traders and engineers) away... the whole pandering to "renewables" thing does not make long term commercial sense - it looks rather like a series of weak "me too" corporate fashion statements.

The Musk is looking a bit careworn these days as the BS unravels in some quarters....

it may not make economic sense at the macro-level, Gordon - but for an individual company it can make perfect commercial sense, both financially (because of reliable, government-underwritten subsidies) and in PR terms. So it's hard to criticise said firms for going with the tide of explicit, consistent (if "irratonal") government policy

early results were (again, at the macro-level) diabolical: wasteful projects at huge cost, frequently lining the pockets handsomely of the subsidy-farming players involved at public expense. But things have been getting slowly better, to the point where costs in many sectors have really been driven down; and just recently a big solar-farm-plus-batteries has been set up in our very own little Flitwick, Beds that claims to be unsubsidised!
https://www.gov.uk/government/news/subsidy-free-solar-comes-to-the-uk
But I'd say a few years of operating experience in the Real World will be needed to test that one ...

I do deplore the billions of waste that has been and is taking place in the meantime. Plus, in the dreadful case of burning biomass, causing an actual increase in CO2 emissions (among other depradations), an outright disgrace

Having spent my career teaching both Engineers and Finance students, I can understand the enmity.

Too many of the latter, as well as Economists, treat huge technical problems as merely a matter of money. One quote I read some years ago was, 'If the oil supply suddenly became so small that the price went too high, we would just come up with alternatives.'

But to mention the other side of the coin, Paddington, I have tried to teach financial risk-management to many an engineer whose opening gambit is: I'm highly numerate, so this is going to be easy

When they discover that the primary numerical challenge is essentially to judge whether the sign on a given quantity is + or - (or perhaps it's 0), and that they can't figure out which it is, they get very puzzled and often *frustrated* (in the American sense of the word)

because they also realise that to judge something is +1 when in fact it's -1 is, embarrassingly, to be facing 180 degrees in the wrong direction, never a good thing whe there is a lot of $$$ at stake

I understand what you're saying - but as you can probably guess I'd classify myself as a renewables skeptic.

If the aim is a reduction in emissions on the overall energy budget then one might reasonably expect that those public servants tasked with that might just go and scope out what provides the best cost-benefit - deferred solar (ground source heat pumps) seems to be ahead there by quite a margin...

The eco-friendly-ness of techniques for harvesting nature's bounty it strikes me has been arbitrarily driven by aesthetic concerns where prominent visibility pretty much trumps effectiveness - driven in large part by the zealotry of the green movement which has inveigled itself into the energy decision making process across the political spectrum.

Yes, while eco / green / sustainability are magic words PR folk can pepper them into branding and "free" money subsidies for things that wouldn't be viable at the prevailing utility price are attractive - while they last.

High capex, low capacity factors, low dispatchability, infrastructure disturbance and reliability/maintenance concerns rule out wind and solar for all but the most remote or favorable locations.

Trading the occasional output of and fiddling with engineering detail of - the machinery of sustainability will, it seems clear to me be a largely futile and expensive exercise.

yeps... futility and expense in pursuit of the 100% renewable chimera dreamed up by folk whose arithmetic and aims are at best incoherent....

Nick - your observations might well explain why so many traders are now Mathematicians and Physicists. They understand error and modelling, but tend to have less of the certainty and rigidity that engineers do.

indeed so, Gordon, & these things are mapped out in the so-called Marginal Abatement Cost Curve. Given that the most cost-effective measures are in fact self-financing**, those should clearly be done first, gradually working one's way up the curve, just as far as necessary but no further

In practice, people lobby hard for their project wherever it lies on the curve and success is based on their lobbying skills. One of the excuses governments make for succumbing to this is "a level playing-field for all technologies", aka "the more stupid the idea, the bigger the subsidy". To see this in action, look no further than the grotesque "Swansea Tidal Lagoon" project which needs just £1.3 billion capex for 4 short surges per day of a small amount of electricity. they are pitching for a £90/MWh contract for 90 (ninety) years. If they had to settle for a 15-year contract like everyone else (excepting Hinkley) they would need approx £250/MWh. Today's wholesale price of elec is ~ £50, and the latest round of offshore windfarms came in at £57 (at auction)

So the Lagoon ought not to have been given the time of day, right? But it has been: it's still awaiting a government verdict. Why? Let's just note its promoter used to be a film director and a journalist, and has the Welsh Assemby eating out of his hand.
__________________
** self-financing in the sense of being profitable at a reasonable discount rate: but of course sometimes finance is a real issue, e.g. for insulating social housing.

that "going rate x5" £250 MW/h is a number that pretty much every taxpayer who's heard of the Swansea Barrage is unaware of...

Given that the capex would easily fund 130,000 average domestic ground source heat pumps the bang per buck / social amenity / utility looks even more woeful than the headline "savings",

The Welsh Assembly ? I've heard enough tales that cause eye-roll + head shake to last me a while...