One of the first difficulties with modern democracy is scale and ratio. It used to take far fewer votes to elect an MP, which means that the individual voter had much more power. Granted, not many people had the vote in the nineteenth century, and no women.

The franchise has quite rightly been extended since then, but taken together with the increase in the size of the population it means that we now have much greater difficulty in influencing our representatives. They don't even bother to get us drunk at the hustings any more.

Before the Reform Act of 1832, some Parliamentary constituencies could have sat together in an open carriage (Old Sarum had 7 voters); even afterwards, the average seat had an electorate of about 1,236. Today it's around 71,300 and if (as Cameron and co. wish) the Commons is cut to 600 seats, your voice will be one in around 77,250 - more than could fit into Old Trafford stadium. 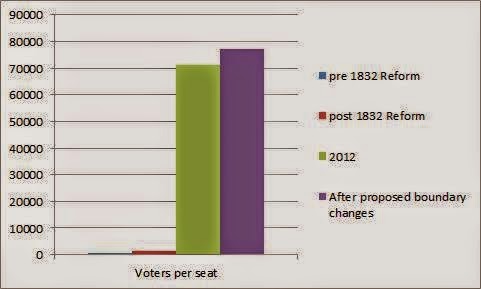 But in the old days, there were other ways to register one's feelings. Democracy is for averting these other methods.

During the 1991 phase of the Maastricht debate, Tony Benn observed:

"If people lose the power to sack their Government, one of several things happens. First, people may just slope off. Apathy could destroy democracy. When the turnout drops below 50 per cent., we are in danger.

"The second thing that people can do is to riot. Riot is an old-fashioned method of drawing the attention of the Government to what is wrong. It is difficult for an elected person to admit it, but the riot at Strangeways produced some prison reforms. Riot has historically played a much larger part in British politics than we are ever allowed to know.

"Thirdly, nationalism can arise. Instead of blaming the treaty of Rome, people say, "It is those Germans," or, "It is the French." Nationalism is built out of frustration that people feel when they cannot get their way through the ballot box. With nationalism comes repression.

"I hope that it is not pessimistic--in my view it is not--to say that democracy hangs by a thread in every country of the world. Unless we can offer people a peaceful route to the resolution of injustices through the ballot box, they will not listen to a House that has blocked off that route."

We've seen from Dr Matt Qvortrup's paper that there is statistical evidence supporting the idea that barriers to political representation breed discontent that can sometimes lead to terrorist acts.

A very good post. I missed it due to holiday initially but an interesting read.

As far as I understand it, parliament is impotent with decisions now made in the EU. Anything else is left to the Press/Media class and NGOs.

The Post-Democratic Era. Your vote is meaningless.

Thanks, Wolfie. Hope you had a good hol. Write something here sometime soon?