If we are to understand them, we have to look behind the horrible events in Ukraine - for which the West may turn out to be be partly responsible, if Peter Hitchens is right about the CIA's Director being spotted in Kiev a couple of weeks ago.

How about, Russia's future as a non-EU European country?

For all its vastness, the land is far more heavily populated in the West, as hardly anyone wants to live in the cruel cold of the Siberian winter:

Then, how about the customs union between Russia, Belarus and Kazakhstan that started in January 2010, which could be the seed crystal of a sort of eastern EU?

And the massive blue-sky concept, mooted in 2008, of a Trans-Asian Corridor of Development? Here's a map of how it could look:
On a less gigantic scale, there is the long-proposed Eurasia Canal project, linking the Black Sea to the Caspian via Georgia:

This was reportedly delayed in 2011, pending the development of cargo facilities in Kazakhstan.

A company called Yaconto LLC had ambitious plans along the same lines, with a naval base at Tuapse (two hours' drive from Sochi, on the Black Sea): 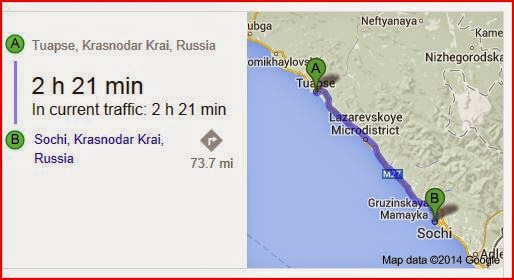 Yaconto (founded by a Sergey P Yakunin) appears to have ceased trading, but it's interesting to note that further up the same coastline is the port of Novorossiysk, which has indeed been developed, as I noted in an earlier post:

As part of his integrated plan, Yakunin also proposed the construction of a second waterway parallel to the Bosphorus, to ease shipping between the Black Sea and the Mediterranean. The last couple of paragraphs refer darkly to potential interference from the corrupt elite in Russia and perhaps this is what has happened after all. (Nevertheless, last year Turkey announced its determination to continue with its own similar plan for a "Kanal Istanbul".)

And three days ago, President Putin told officials to come up with a plan to develop Russia's Black Sea fleet.

Like China, Russia is under pressure to maintain economic momentum, like a fox with its tail on fire. Her aim - perhaps unattainable - is to achieve 7% pa GDP growth to 2020: have a look at these briefings from the Center for Strategic and International Studies. There's a long list of challenges to be overcome, including corruption and ineffective law and regulation.

As with China, a rapidly-growing economy is needed to tackle a host of problems, not least demographic challenges. There's a danger of collapse if their economies stall.

We can only hope that this is not the West's intention.

Some previous BOM posts on Russia: