Panic buying: and so it begins... by Wiggia 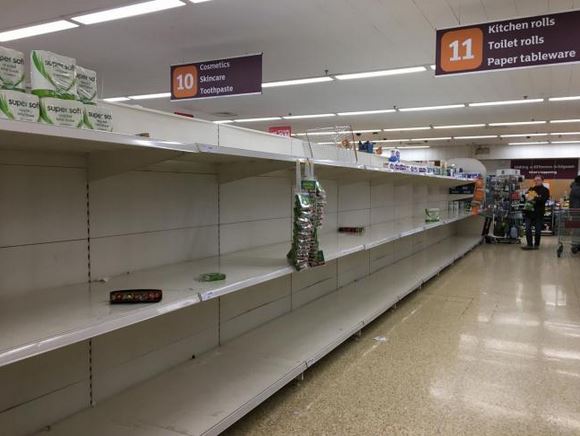 “Even if there are no food panics requiring police or army at supermarket checkouts for rationing, emergency services are already planning to triage what they can provide with tough restrictions on their services. “

Attacking the government for ‘not doing enough’ is standard practice for those of another political persuasion regardless of the gravity of the subject, but governments don’t exactly cover themselves in glory about the same events. Matt Hancock the Health Minister has assured the nation that food supplies will not suffer from any shortages and measures are in place; not that the food industry has heard anything about these measures, in fact several of the senior figures in the food industry have denied any contact with the government has taken place ! They will just do all they can to maintain supplies as normal.

The press as always are guilty of ramping up the doomsday scenario with figures of likely deaths way off the radar and no proof to back them up. The Express had the likelihood of millions catching the virus and the NHS has proclaimed measures are in place to contain the spread, extra facilities are being made available with the government's help... Of course, if the Express doomsday scenario comes to pass the NHS will have something like 6 million extra patients to deal with. The NHS has difficulty accommodating an extra six hundred in the winter. Nurses and doctors are coming out of retirement to help in the crisis; perhaps getting those who are on a three-day week to do more would be more fruitful, or is that a step too far?

The threat of millions being infected is at this stage totally unfounded, yet news(?)papers like the Express headline this as a probability. Why they should want to provoke the inevitable panic buying is a mystery yet they do it every time. Those of us who remember the fuel  crisis will also remember the cars being filled after waiting hours in a queue, with 1 gallon of petrol, and when the crisis was over it was estimated that most cars had full tanks even if they were going nowhere .

We are what we are, or at least a fair number fit the profile. I am old enough to remember when chocolate came off rationing after the war and people cleared out local shops of the stuff and could be seen carrying bags of chocolates home. This is a ifferent situation for sure, but the same mentality.

Today there is also the problem, should a cordon sanitaire be imposed on people who really believe it has nothing to do with them? Human rights has a lot to answer for as many actually say (as a couple in a hotel did when spied outside their room by the pool) that they were on holiday and nothing was going to stop them getting a tan, or words to that effect. The population today is not of the Blitz mentality, more's the shame, and any closed-off areas are going to be hard to police - shooting chancers is not an option these days, where human rights come into play.

The limiting by numbers of public gatherings is also subject already to breaches. In Italy a mosque which ignored the ruling was raided, emptied and the imam arrested; I can’t see that happening here somehow. The containment used in China comes from a regime and a people who are used to that style of imposition, not so in the West.

So what will happen? Nobody really knows; all the guesses are educated and otherwises, though speculation so far is not exactly tempered, hence back to the panic buying.

I had a small taste of the rush for ‘staples’ and, with another trip and anecdotal stories from others, a small but useless compilation of the state of play in the local supermarkets. For reasons unknown, Sainsbury's came bottom of the list of the big supermarkets, with no loo rolls and no cheap pasta - cheap seems to be sold out everywhere but the more expensive remains untouched, for now. Asda only had Plenty toilet rolls (geddit?), the Co-op had dregs of everything, Morrissinghs had sold out of all bumper packs of toilet rolls, Waitrose don’t do bumper packs at all stores but still had stocks in some and Tesco locally at least seemed to have an endless supply, which is just as well as the buyers of all this paper must be planning for at least a fortnight of self-isolating on the old porcelain trombone. 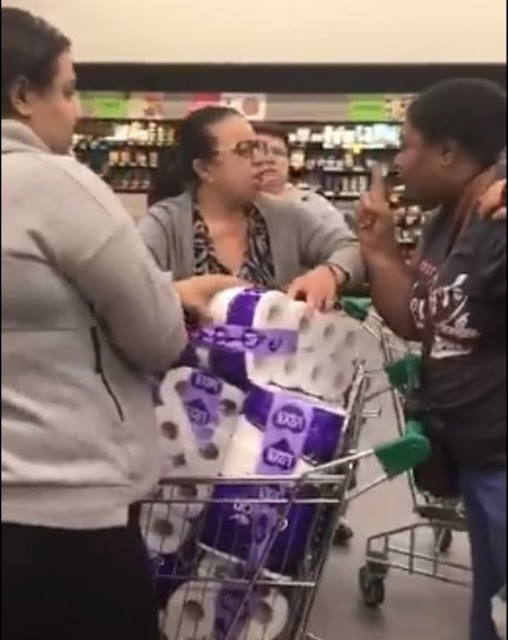 Aldi, I was told, only had loose toilet rolls for sale and they were mainly on the floor: not unusual for our local Aldi as there is always plenty of stock being kicked down the aisles so toilet rolls just add to the mix. Terrible store, this one at least, why anyone goes there is a mystery.

My own trip to Waitrose showed, upon getting out of the car, a lot of people exiting with bumper (or any at all) loo roll packs, all looking suitably grim: a sort of Last Supper but with loo rolls. Inside, the pasta section, true to form, had been hollowed out of the ‘essential’ range and all else remained intact; cans of beans various were spied in quantity in many baskets and cut bread in wrappers was in abundance. The canned fish seemed normal so far, as did the packet and pot noodles - sold out everywhere in China, I’m told!

At the check-out the lady in front with the same glum face of impending national wipe-out imminent, had no loo rolls I could see, but twelve cut loaves, a large pile of cans various (at least thirty in total and , yes I did count them), and twenty packs of blueberries - is there something in that I have not been told about, or is it or just a strange taste?

It has been suggested that should loo rolls completely vanish, cutting a paper towel roll in half will suffice, or failing that the Guardian cut into squares with a piece of string through one corner is a neat alternative; and should that option fail B&Q have at the moment plenty of Vimura wallpaper. All are preferable to the awful Izal of old which I believe is still made, for who I can only guess.

Personally if the worst comes to the worst my cellar is overflowing, I shall in desperate times self isolate down there with some glasses and a corkscrew and see it all out; if there is anyone left after the allotted time please ring a bell to let me know.

Paddington - Izal was more like tracing paper. And yes I did use it for that purpose :-)