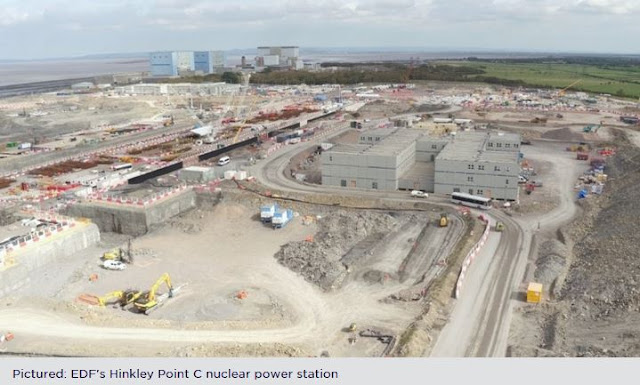 Apart from the coronavirus pandemic it is still the climate scam that leads on all other news fronts. The endless, almost propaganda-like programs come at us on a conveyor belt of editions, depicting scenarios whereby the world is going to end by (fill in any suitable date) - preferably very soon.
The same goes for celebrity environmentalists and the omnipresent Greta. giving their version of what should be done to any anyone that lends an ear. It is now a full-time industry in itself.

It is very difficult to find any variance to the mantra put out by all the involved bodies, be it government NGOs or individuals who want to appear caring: the planet will not survive, we must give up meat, or anything else vaguely connected to their view of the reasons climate is changing. Why is so little challenged? Even when the odd person does challenge, endless experts (?) are wheeled out to condemn the denier - notice that ‘denier’ is used as a label to pre-judge anyone who has a contrary point of view, thereby skewing the debate before it starts.

Looking at all this from the outside, it is easy to take the stance that all is orchestrated in favour of big business, the justifiably termed ‘climate scam’; but all of it? Probably not. Many in the public and government domains also have much to gain: governments are always looking for an ‘edge’ to help them foist their progressive plans onto the public, and if it coincides with the thinking of some pressure group then it is a double whammy for the government: they will be perceived as doing the right thing, and the vociferous group will get itself noticed by backing them (though naturally the proposals will never go far enough to satisfy the group.)

It may sound simplistic to characterise the push for climate change in this way, yet the fact that billions of pounds of company money have been funnelled in this direction has also had an effect, with (as the entrepreneurs hope) the phasing out of fossil fuels: those that have got in early and grabbed a large chunk of the renewables market stand to make a fortune, knowing they are sure to get subsidies from public money.

Much of the propaganda surrounding wind farms and solar power represents them as cheap power when they are anything but. We still need conventional power stations (fossil fuelled or nuclear) permanently on standby for when the wind doesn’t blow, or blow correctly, or the sun doesn’t shine. This is never going to be cheap, and it is never included in the price equation. They tell us that by the time the transition is complete we will have developed enough backup power storage; this would indeed be an answer, but adequate storage in whatever form is still a daydream and will almost certainly remain so for decades or maybe forever. ‘We don't have the large scale storage capability in place [for wind] and indeed the technologies which would get us there are nascent technologies – they've not being [sic] demonstrated [on] that scale,’ says Martin Freer, director of the Birmingham Energy Institute.

Which brings us to batteries. Switching automobiles to battery power is in principle an admirable concept and it will come to pass; there is nothing wrong with that, so far as it goes. However, I have written before about the lack of extra electricity needed to charge these vehicles when their numbers increase: it simply isn’t there, and many of the rare minerals needed for batteries are not readily available on the scale needed in the future.

Battery-powered items are on the rise big-time in other areas besides transport. It may be easy to ignore the power required to charge a mobile phone or a home power drill, but the scale of the supply problem starts to emerge when you consider the demand just for the electric power tools used by professionals, plus the rise of the cordless home vacuum cleaner, and the growing market for outdoor garden equipment. Yet again, nothing is ever said about this: as long as a new product is electric, it is immune from criticism.

From a few years ago till now, the rise of the battery-powered device or piece of equipment has been enormous, small beer at first in the scheme of things, but no longer: the total of millions of these items takes a sizeable chunk from the total electricity supply and the demand is increasing.
An interesting article or report in the Times the other day gave a clue to the scale of the problem. It was not from a ‘denier’ about climate change, but from a green think tank group. It declared ‘problems’ with meeting the 2050 target: the UK needs to find three times the current capacity by then to reach the carbon neutral target.

But despite much trumpeting of a first, having had two fossil-fuel-less months last year (May and June, note the months, and of course this includes nuclear), fossil fuel provides the basis for reliable energy at this time. The closing of the remaining nuclear plants with only one new (Hinkley) in the pipe line and the scrapping of the building of three others leaves a very large hole in future energy production that wind power could never fill. Our requirements for carbon-free energy and transport will need up to five times our current output according to some experts and a whole fleet of new nuclear plants; not likely, as getting one built has taken or will take a couple of decades.

There are currently 15 nuclear reactors at nine sites. The first of these to be shut down will be expected in 2023 and the last in 2035, so there is not long to get started on building any new ones.
We also import energy with a high voltage connection to France plus Holland and Belgium, and a new connection to Norway is in the offing; this is a cop-out on getting our act together with home production, and does anyone want to be reliant on imports of that kind to stop the lights going out? For a nation that was at the forefront of producing nuclear power to come to the state we are in now it is a sorry tale. It beggars belief we could throw away our technical know-how and lead in that area and be reduced to importing energy from nuclear-led France.

The same incompetence led to the conversion of the Drax power plants to biomass. Not only does the electricity cost double that of a gas plant but each plant uses four million tons of wood pellets annually, imported from Canada. It must be one of the most stupid decisions any government has made regarding energy production or anything else for that matter.

The seasonal variation of wind power without nuclear could scupper any carbon neutral plans, as in Germany, where they stupidly listened to the green lobby and closed all their nuclear plants. They then had to reopen and build coal- and gas-powered power plants to meet demand. Not very forward-thinking, yet we are taking the same road.

And again, all we are told is that we have a shrinking deadline for being carbon neutral with nobody questioning in public the feasibility of it all, or rather total lack of feasibility. One can only assume that an awful lot of people have a lot of monetary gain included in their plans and that government to some extent is in cahoots with this. Once again big numbers are thrown around with the knowledge if it all goes wrong or exceeds current pricing estimates - as it inevitably will - the tax payer will pick up the bill. Nothing new there, then.

***Nick Drew gives a detailed expert response in the next post.***