Why We Should Have A Second Referendum

The article below has since been published almost verbatim on The Conservative Woman under the title "Deal or No Deal – let the people decide."

I wish to argue for a second, binding referendum to choose between the final draft Withdrawal Agreement, and leaving the EU without one. I hope this case will be brought to court and succeed.

There must be no option to remain. The decision to leave the European Union has been comprehensively confirmed:
Quite rightly then, ex-PM Theresa May told Parliament last week that any attempt to overturn the 2016 result would be the “most egregious con-trick on the British people” https://www.express.co.uk/news/politics/1192892/Theresa-may-speech-brexit-vote-today . That is putting it mildly: if Parliament breaks this, it breaks its moral right to govern. Pace Matthew Parris https://www.spectator.co.uk/2019/10/the-question-a-second-referendum-must-ask/, there is no revisiting that part of the nation’s decision.

Yet that is only the first part; the second is to address the terms of withdrawal.

In the “Miller I” case of January 2017, the Supreme Court ruled https://en.wikipedia.org/wiki/R_(Miller)_v_Secretary_of_State_for_Exiting_the_European_Union#Judgment_2 that unlike with other international agreements, the Government could not withdraw from the Lisbon Treaty without reference to Parliament, because constitutional issues were involved. Leaving entailed the loss of certain EU member citizen rights, and ECA 1972 had not expressly conferred a power on the Secretary of State to alter them. Hence the right to a “Meaningful Vote.”

But this raises the question of whether Parliament itself is fit to make that choice without reference to the people, whose interests they supposedly represent. The 2018 Withdrawal Act was passed 324:295 (52% to 48%, again!), but if the division had been according to the number of constituencies in which the majority voted Leave in the Referendum, the Ayes would have been 406; and if all Conservative and Labour MPs had honoured their manifesto commitments, the Ayes would have risen to at least 579 (or 89%).

Why these discrepancies?
We ordinary people feel more and more like Lewis Carroll’s Oysters, trying to gain the attention of the Walrus and the Carpenter while the latter are only interested in having enough bread and butter to eat them with. 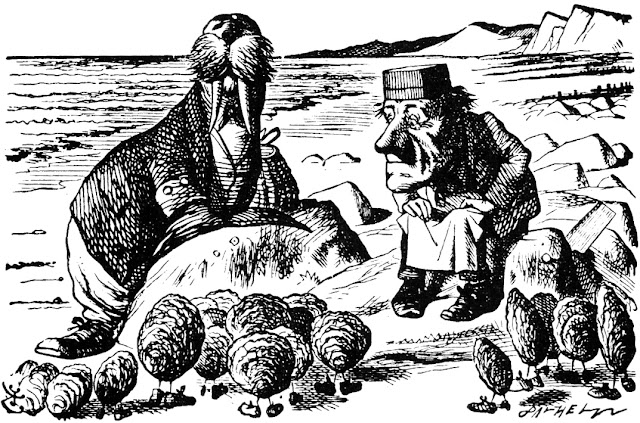 The consequences of Brentry and Brexit are usually couched in economic terms. Even Wilson bribed us in 1975 with the promise of “FOOD and MONEY and JOBS" http://www.harvard-digital.co.uk/euro/pamphlet.htm (we then got more expensive food, less money and fewer jobs) while not telling us that in time we were to be absorbed into a sprawling new country. If the debate were to centre itself on democratic principles, our Remain politicians would be embarrassed at their own exposure, like Adam and Eve after eating from the Tree of Knowledge.

For it is clear that the electoral system is dangerously flawed. Democracy depends on the acquiescence of the losers. The winners do not win convincingly – no party has held power on the basis of a majority of votes cast nationally, since 1931 https://en.wikipedia.org/wiki/United_Kingdom_general_elections_overview#1929%E2%80%931951 ; in the 2005 GE only 220 MPs won an absolute majority in their various constituencies and in 2010, only 217. Conscious of the exclusion problem, Parliament debated electoral reform in 1931, but failed to agree because the Commons wanted AV and Lords preferred PR. In the 2011 Referendum both major parties opposed the Alternative Vote because they felt it would cut into their portions of the cake, and let the LibDems starve amid plenty.

So, Parliamentary seats do not accurately reflect voter preferences, and MPs and Lords feel free to ignore them anyhow. Brexit and the choice of ratification or rejection of the terms cannot safely be left to this Parliament, nor can a General Election with all its complexities properly resolve the matter.

We have already accepted the principle that this is no ordinary issue but a great Constitutional one. Even our entry into the EEC had to be validated post facto by a referendum, though the result was skewed by political pressure on Fleet Street at a time when there were fewer alternative sources of information and analysis. If Gina Miller won her case because our rights were involved, then we should also remember that joining the EEC not only conferred rights, it took them away, and what we lost thereby in democratic terms is far more than what we gained. Implicitly our leaders had agreed to a progressively huge loss of power – not only the British State’s over its own affairs, but of the British citizenship’s over its rulers.

And we now know for certain that Heath lied. He knew from 1970 on that the project was for a superstate https://campaignforanindependentbritain.org.uk/britain-europe-bruges-group/ . How many in Parliament knew this? We certainly didn’t – Con O’Neill’s briefing was kept secret for 30 years. It could be argued that lacking Parliament’s and the people’s informed consent, we have never validly been a member nation of “Europe.”

As far as my own rights are concerned, I say that HMG no more has the power to strip me of my British citizenship and make me a citizen of the EU, than it has the right to make me a Russian or Kazakhstani without my consent.

And because there are aspects of the current draft WA/PD that bind my Government’s hands on many important and enduring sovereign matters such as foreign policy https://www.brugesgroup.com/blog/the-revised-withdrawal-agreement-and-political-declaration-a-briefing-note , it will not be valid unless I and a majority of my fellow citizens agree.

There must be a Meaningful Vote; a People’s Vote; a New, Confirmatory, Second Referendum – on Deal or No Deal.