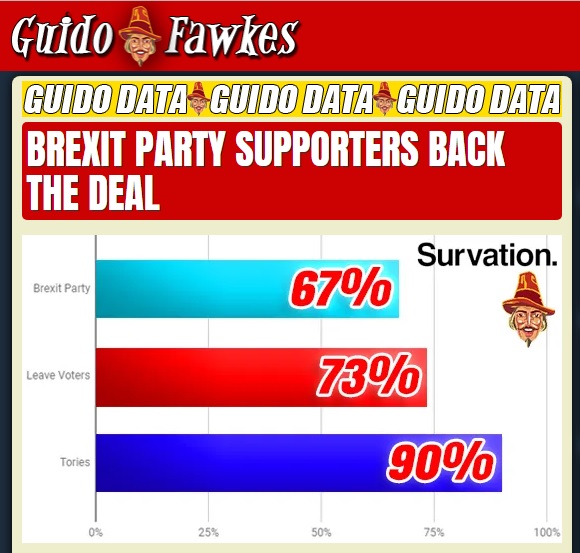 
"Despite Nigel’s continuing opposition for opposition’s sake, it seems his usually loyal followers are abandoning him in favour of Boris’s new deal. Last man in the bunker…
"A new Survation poll out this morning shows 67% of Brexit Party voters want the Commons to pass the deal, a little behind the 73% of leave voters and 90% of Conservative voters. In the country as a whole, the deal has 47% support versus 37% opposition. Theresa May could only dream of numbers like these…"
_______________________

Survation's Tweet makes it clear that their results indicate 51% still wish to leave the EU, versus 45% wishing to remain and 5% unsure.

More usefully, Survation give a link to the full results [https://t.co/kiRyQXmIJA] and it is worth seeing what underpins this apparently overwhelming endorsement for the new Prime Minister's deal.

The context is a worry. The first page of the spreadsheet (see the second and third tabs at the foot for Contents and Tables) show that the survey was conducted on behalf of the Daily Mail, a newspaper that has radically changed its stance on Brexit since Geordie Greig took over the editorship from Paul Dacre. Greig's preference is for Remain, but also for Scottish independence, a stance I find illogical - you either believe in national sovereignty or you don't.

Also, I'm not quite sure who set the questions, and why they did it that way. The answers you get are conditioned by the way you ask the questions.

At any rate, "Guido Fawkes" is picking his sample results from Table 60, which you can check for yourself on the third page as linked above.

Table 60 analyses responses to Question 26, which reads:
"From what you have seen or heard about the government's Brexit deal, to what extent do you support or oppose the deal?"
Already we wonder what the respondent knows - who has provided that information, and how has it been presented?

Moreover, the respondents are merely a subset of the total respondents - only 674 out of 1,025 - so the margin of error is greater. Even then, not all in that subset replied to all parts: the "current voting intention" line (line #1641, Columns Q-W) adds up to only 601 people, and only 596 people said how they voted in the 2016 Referendum (Columns H and I).

And, of course, this news item is not only cherry-picking statistics out of this smaller sample, but combining them to give a misleading impression of homogeneity of feeling. For example, of those who told the pollster they intended to vote for the Brexit Party next time, only 15 people "strongly supported" Boris' deal, as opposed to 36 who "somewhat supported" it. That's a dodgily combined total of 51 people - reported as "67% of Brexit Party supporters." If you want to know what TBP supporters feel about the deal, go and poll them. 5,248,533 people voted for TBP in the 2019 European Parliament elections - that's more than 100,000 times that 51-person sample!

The same kind of game is played with "Leave voters" (those who voted Leave in 2016) and "Tories" (those telling the pollster that's who they will vote for in the next GE - they'd never lie, would they?).

Safe and reliable? I'm not inclined to think so.

In fact of ALL those who responded to question 26 and also indicated their voting intentions in the next General Election, only 137 "strongly supported" the proposed deal, and a further mere 158 "somewhat supported" it. Even adding them together - sheep with cows (Little Boy Blue, you're falling down on the job) - you get 295 people out of a total survey population of 1,025. 295 very variably informed people with probably very differently nuanced stances on their support for "deal".

I wonder what results we'd have got if respondents were restricted to those who did more than read the Daily Mail or watch BBC News, and instead looked at the online commenters' analyses of the pros and cons of the full deal.

It would have been comical, had it not been almost tragic, to watch ex-PM Mrs May castigating the Opposition in Parliament for failing to honour the statutes they helped enact - withdrawal from the EU, and the triggering of Article 50.

Did they mean it? Well, did she, when she then came to the Commons three times with a ball-and-chain Withdrawal Agreement? Or her successor, who has returned with much the same (lipstick on a crocodile, I call it)? Or those who now call for another Referendum, with a choice of a rotten deal or Remain - the latter being the one thing that was definitively ruled out in 2016?

What is "Guido Fawkes" doing, cheerleading this farrago of misleading information?