Globalism Is Not Centrist

Former PM Tony Blair's approach to politics used the concept of "triangulation" - appearing to be not-Left, not-Right but a just-perfect Goldilocks moderate compromise.

Writing in The Conservative Woman, Dr Campbell Campbell-Jack says "In the protests throughout France we see symptoms which have appeared elsewhere in Europe of the crumbling of the globalist centre."

The word "centre" is (unintentionally, in this case) misleading. Between those who govern and those who are governed, there is no left and right. Instead it is up and down: those up there, us down here.

A triangle is two-dimensional. Here is the centre:


But human nature being what it is, power and money have a tendency, not to "centralise" but to concentrate - at the top: 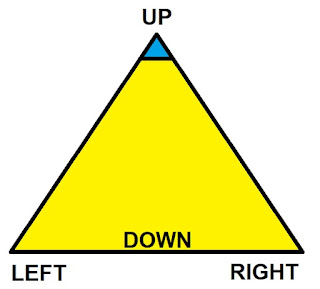 In the various modern versions of what is called democracy, the rationale for concentrating so much power in the apex is that somehow our interests are represented by it. Our problem is that we are daily less and less convinced of the truth of this argument.

Now it's becoming their problem, too.

Most power becomes centralized because people can't be bothered, and sneaky bastards move in.

"Q: What is the greatest danger facing the United States today, and what is the most effective way for individual Americans to respond to that danger?

"A: The global governance movement. A one-world government is an absolutely terrible concept, because it sets up a system of an ultimate prize to be claimed by the most ruthless, most determined, and most power-hungry individuals. The hypothetical process of getting to that point is bad enough, but if the global governance enthusiasts ever succeed in establishing it, it's going to make the historical institutions of slavery and medieval serfdom look like freedom in comparison."

Or is it the corporations who have bought the politicians here?

Good point. I keep remembering Bertrand Russell's book "Power." Power is fungible - political-economic-ideological. The different sectors are intermarrying - even including the higher members of the Fourth Estate.