The Trump Wall, In Context

In January 2018 President Trump requested $25 billion to build a wall along the border with Mexico.

In August, the Government Accountability Office warned that the project could cost more than estimated; but didn't quantify this, so we'll have to go with the figure given.

The US Federal Budget for 2018/19 is $4,407 billion. This is more than expected income so requires a deficit of $985 billion to make up the difference.

This chart is to visualise the relative size of the Wall's cost. The Wall is equivalent to 0.57% of the annual budget, or 2.5% of the deficit, or 6.9% of the annual interest on the National Debt. 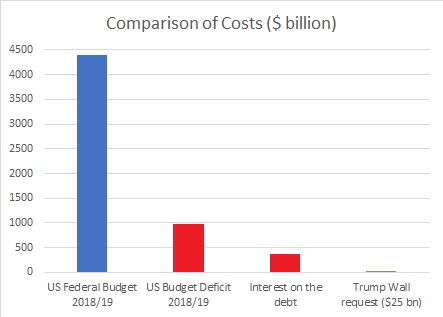 Cancelling the Wall would make very little difference to the national finances. [UPDATE, 6.1.19: even less, if the current demand for $5.6 billion is agreed.]

The costs and benefits of unauthorised Mexico to US migration seem hard to establish. There are something like 10 - 12 million such migrants [correction: not all Mexican - see comment below] now residing in the US. If many of these represent cheap labour, then that is a benefit to employers; but the cheap labour force will pay little in income tax and may be entitled to supplementary in-work benefits, which is a cost to the State and in effect a subsidy to the employer. Also, wealthy Americans have many clever ways to keep down their tax contributions and are more likely than the average wage earner to put spare money into investments rather than personal expenditure.

Whereas if restricting migration and foreign imports increases labour wages, then the American working class may be more self-sufficient in income, pay more in taxes and also be more likely to spend spare cash, stimulating demand. Perhaps this could help bring the budget into balance.

If allowed to proceed, the Wall would be one useful test of that theory.

That figure of 10-12 million illegal immigrants is for all of them. Most are no longer coming from Mexico, but from the non-states like Honduras. There are also a lot from Canada, Asia and the Middle East.

It is estimated that most of them are now arriving and simply overstaying visas.