In Jerome K Jerome's “Three Men In A Boat” (1889)[1] there is a passage where the men get lost and are relieved when they hear someone playing a popular melody:

"I do not admire the tones of a concertina, as a rule; but, oh! how beautiful the music seemed to us both then — far, far more beautiful than the voice of Orpheus or the lute of Apollo, or anything of that sort could have sounded. Heavenly melody, in our then state of mind, would only have still further harrowed us. A soul-moving harmony, correctly performed, we should have taken as a spirit-warning, and have given up all hope. But about the strains of “He’s got ’em on,” jerked spasmodically, and with involuntary variations, out of a wheezy accordion, there was something singularly human and reassuring."

Intrigued by this, I attempted to find out more about the song. This proved more difficult than I had expected. Via Google and Google Images, I now know it's from the Beefsteak Club's 1878 "Forty Thieves" burlesque, originally performed at the Gaiety Theatre (see W G Elliot, "Amateur Clubs and Actors" [1898] Chap. 6)[2] and (I think) re-staged there from 1880 onwards. An image of the front page of the song sheet is on the V&A website at 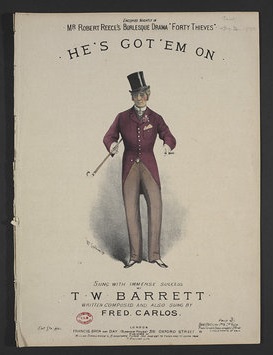 - but I couldn't find the words or music.

However there is a reproduction of the same thing in "The Hidden Consumer: Masculinities, Fashion and City Life 1860-1914" by Christopher Breward[3], and there it says it's in the Bodleian's John Johnson collection under Entertainers and Music Hall Singers.

I emailed the Bodleian to ask for a copy/transcript of the lyrics and notation - and they replied the same day ! - but they only have the cover. I then use the V&A’s contact form and asked the same thing - silence, so far.

The  libretto of the Forty Thieves is still available[4]. Written by Robert Reece,  W.S. Gilbert  (of Gilbert and Sullivan fame) and a couple of others, it was a highly successful production which raised a lot of money for charity.

Having some experience of amateur drama myself I looked up Elliot’s book and then came across another that he wrote later in life called “In My Anecdotage” (1925)[5] I bought the latter and have just finished reading it. It's a fascinating insight into the mind of an upper class man from less than a century ago.  Educated at Eton and Cambridge, Elliot was writing in 1924, two years after the foundation of the British Broadcasting Company (radio) and five years before the first UK television broadcast and the first British talking feature film.[6] Cinema was only just beginning to replace live theatre as a profitable form of mass entertainment and Elliot could still recall a time when a theatre could make money even when only half the seats were taken.

In the late Victorian and Edwardian eras upper-class gentlemen and ladies were expected to have amateur personal accomplishments such as acting and singing and many a grand house would entertain its guests with skits and parlour games such as “dumb crambo” (a kind of Charades with costumes and props). The head of the household would lead the family in prayers and the country was run by a relatively small and tightly-knit group educated at a handful of public schools and Oxbridge.

But the UK had just (1924) elected its first Labour Government. Of women, so far only householders had been granted the right to vote (1918); Liberal and feminist sympathisers like Elliott welcomed their new freedoms while at the same time being somewhat taken aback by how some of them exercised it. Not far ahead were the General Strike, the Wall Street Crash, the Depression and another world war.