Wine, the Making Of, by Wiggia 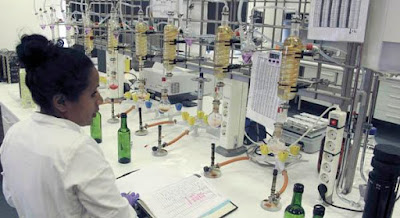 My Wine Change and Fashion piece was actually read by someone outside our small (hopefully widening) circle, in fairness only because I told him about it, but he did read it and we had a discussion that involved a lot of the current trends and the manufacturing of wine by the big players, e.g. Gallo.

With a bit of research many findings simply underscored that we already knew but went a lot further: it is quite remarkable how the food industry has taken wine in a relatively few years from being a pig in a poke to a beverage that can be relied on to assuage people's perceptions of what wine should be and sell it as you would a packet of crisps; that is nowhere as far-fetched as it sounds, in fact not at all.

All the big wineries use outside testing tasting companies to put together the tastes that people want. It is exactly the same as biscuits or ready made meals: your chicken Kiev may have come from Asda or Waitrose and may taste slightly different, but the only real difference as they are all produced by Allied Foods or similar; it is the seasoning or sauce variation that has been tweaked to give an impression it is a better product and can command a premium when purchased from an upmarket retailer.

With wine at the moment it is not quite that approach as the big wineries do their own market research, through these companies and some in house to tweak and alter their own wines to best suit the target punters.

Before anyone goes all au naturel over this, the Romans were doctoring wine by using lead (really!) as a sweetener, marble dust, animal blood and seawater, all part of the enhancing and prolonging of the life of wine, and even before the industrialisation of wine  and today the use of sulphur, copper nitrates, the use of egg yolks in the fining of wine, removing particles, the addition of sugar in bad years and bad wines to bring the alcohol level up, chaptalisation is the posh word used for that, were and are all normal and legal additions to wine-making.

Today those bad wine days are over. The technical side has created an industry within an industry that with powders and potions, all of which are legal, they can cleanse, enhance, change and improve, dilute as necessary, raise and lower alcohol levels, add colouring for that rich red or change to a lighter colour for that fresh look, all without breaking any laws.

This is a typical wine lab: http://www.okwinelab.com/

Even the expensive oak barrel taste can be replicated by wood shavings, wood dust, staves of wood and chips with added flavours; all achieve the same end to the nth degree as the expensive wood barrels. All this after extensive research and blind testing and tasting with random groups who will give their opinions on favourite tastes and smells, it is pure market research.

What is often forgotten is the target market, that £5-6 bracket that is where the bulk of all wine sales are, and it does not take a lot more tweaking to produce a premium product that commands a higher price. A good example of that is the Ravenswood Zinfandel, winner of a gold medal, and gives the impression of being made by a small winery; far from it - it comes from a very large industrial winery. The use of labels depicting some idyll small winery is a normal marketing trick, again no different from Tesco's use of farm logos on veg that has never seen this country's soil.

As an example of the scale of production with the big brands. Yellowtail from South Australia produces 12 million cases annually. 96% is exported and most goes to the States of all places, where the demand increases, it is their biggest imported wine.

What does all this mean? Jancis Robinson, one of the few wine writers I have respect for, has summed it up rather well: she wrote, “It is one of the ironies of the wine market today that just as the price differential between cheapest and most expensive bottles is greater than ever before, the difference in quality between these two extremes is probably narrower than it has ever been.” She also reiterates what I said in the earlier piece about how little bad wine exists now, so much so we have largely forgotten how bad it was. There is no doubt that industrialisation has made it possible to elevate good wine to a level near very near to established top end products.

Of course expectations still play a big part in enjoying wine and buying it. If someone spends £50+ on a bottle of wine his brain is already telling him that the wine will be good even if it isn’t. The same applies to the wine you had on holiday: it is always better than the same bottle you purchased at home. Why? Because you were on holiday enjoying yourself in hopefully wonderful surroundings, your brain is not going to let an average bottle of wine spoil that. That of course is a generalisation, but it has been proven to be fact, in the same way blind tasting even among wine critics can produce different scores for the same wine when drunk on different days and in different surroundings.

So can you trust wine scores? To a degree; the mean average of scores can be a fair result of different palettes, but again you have to remember they are tasting as at the annual primeur tastings in Bordeaux at the Chateau; if you are going to Lafitte for a tasting you are already expecting great things, I would love to see the same tasters' results if all was done blind !

Wine competitions are something I have voiced an opinion on before. These are blind tastings but even blind tastings can produce a different set of results on another day with the same tasters. Another factor is that the wine competitions deal mainly with lower price wines, many of which fall into the industrial category; with the uplift in quality in that section, it appears few go home without an award and now they extend the awards to another higher level - all too much, I feel.

Price and quality do go hand in hand, again it is all arguable: there is no doubt that up to fifty pounds a bottle  the quality climbs with the price; after that, name, reputation and availability push up the price, not always with any justification as to what is in the bottle. Once a wine reaches £100 and up it sadly these days becomes a collector's item or investment. My tasting at the higher end is naturally limited but even I have had some terrible disappointments along with amazing surprises. Burgundy when in the days I could afford the odd “good” bottle was my graveyard: some of the producers who knew and know because of their limited output they could sell anything should have been put to the sword, yet the best red wine I ever drank came from that region.

With wine it is the unknown that keeps me interested, the forever new countries coming onstream with good wines and different grape varietals. It is all good news and keeps the price down. For those who reach for Yellowtail whenever they visit the supermarket shelves one thing is sure: it is a lot, lot better than the equivalent of twenty years back, costs less in real terms and is very unlikely to disappoint or be faulty. Yellowtail became successful by removing the things in wine that new customers do not like, acidity and tannins; this could change as people decide to move on from this orchestrated fruit juice, but for now……..