Where there's a will... by Wiggia 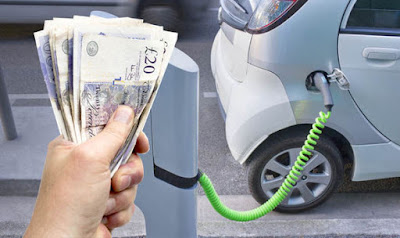 The first was inevitable in one form or another. Anyone who believed purchasing an electric car was saving the planet and would be rewarded for it by not paying fuel duty and getting 100+ mpg to boot for threepence was being naive, to put it mildly.

In fact, it could end up costing you a whole lot more than the equivalent petrol-engined car at current prices. A study sponsored by government has emerged, suggesting ways to claw back the lost fuel duty when these cars finally sell in numbers. Anyone who thought the zero road tax and all the other goodies would go on into the sunset of motoring is now having their eyes peeled as suggestions emerge of toll roads in place of tax, or probably alongside ? Or mileage charges depending on when and where you drive, allied to city restrictions and zone charging. Running a car is going to be a lot more expensive than now. Add in the current disparity in prices for electric vehicles and many will not bother and maybe that is what they want regards cities.

There is no silver lining with this as you can’t strangle car use without having to make up the shortfall in revenue in another way. Going green has always been a con and whilst the spaghetti knitters will be cheering from the sidelines the man on the Clapham Omnibus, if he can get on one, will suffer the costs and inconvenience. Why do the hordes of gold plated civil servants that are put onto these schemes always come up with something that pleases a few and costs everyone else?

On a similar track is the announcement the supermarkets are starting to roll out “surge pricing.” This little wheeze involves electronic labelling that can  change the indicated price in twenty seconds. Ostensibly this is to reduce waste, yesss, and in their words……

“This would let them react to events and remove or introduce offers increasing the ice cream price during a heat wave for example.”

Needless to say “concerns” have been voiced from consumer groups that ultimately most shoppers will pay more. A 3% increase in profit margins is possible with this system, so once again those that work and have limited time to shop and have to do so in lunch hours and similar times will not only have to put up with the crush at those times but pay more for the privilege.

And just to round off the lightening of wallets by stealth - or diktat, in the government's case - the same supermarkets that now control the bulk of petrol retailing want to use the same surge pricing for their petrol forecourts. So the commuter who has to use his car will pay more for the privilege of using roads that as a taxpayer he has already paid for; will, if he uses a petrol station during the same commute periods, pay more for his petrol; and his wife, shopping during the lunch hour at work or on the way home, will pay more for their food.

A spokesman for Sainsbury’s said, “We always look at ways that technology can help us improve the shopping experience for our customers.”

And just to make you shuffle nearer to the cliff edge, the energy companies would also like to charge you according to demand with cheaper prices when nobody uses energy and the reverse when we do. Looking at all that, the only small chink of light is your very expensive electric car can be charged at night at a cheaper rate, though I am sure the government or energy company can fix that in no time at all.

Oh, and I just noticed the BMA want GPs to shut doors amid safety fears. Another spokesman said, “There has to be a limit on what you can do in a day, it is not about money it is about patient safety,” so shutting the doors when someone needs to see a doctor is a safety measure. That’s one way of looking at it, and of course there is only so much anyone can do in a day, but that day in the case of my surgery and most others is in effect a half day: the majority of GPs working there are only working part-time.

They want to able to declare a black alert as hospitals do when not capable of providing a safe and sustainable service and in order to protect patients (they are thinking of us, really) practices are enabled to self-declare a safety alert and direct patients to alternative service providers such as a "local hub", a walk-in centre or A&E. I have no idea what a local hub is but our one and only walk-in centre is overwhelmed, their doctors are working full-time and overtime; and the A&E department will be overjoyed that GPs  are wanting to direct even more patients their way than they do now.

This particular problem in the NHS is not about money. It is about someone somewhere insisting that the contracts that enable most GPs to go part time not work evenings and week ends are changed. The Blair government cock up , if that’s what it was, is costing us dearly - regardless of their independent business status GPs are paid by the taxpayer but you wouldn’t think so sometimes.

On my last visit to my surgery's web site they made great play of the fact ”they are a self care surgery.” Intrigued, I clicked the link and found they are advising everyone to help themselves in all ways possible: “Seek advice from your pharmacist, phone the NHS helpline, query whether your doctor's appointment is really necessary and try to treat yourself if you believe you only have a common ailment.”Do you get from that they perhaps are not wanting to have to deal with patients at all? Along with the fact that getting an appointment has reached the stage you have either cured yourself, self cared (!)or died waiting.

Perhaps shutting the doors is the sensible thing to do. Not a lot of people would notice.

Surge pricing eh? So I pick up my ice cream marked 75p and by the time I get to the checkout the price has surged to 90p. Do I get to stick it to the cashier where the sun dont shine?

Your picture showed a wad of cash. That is where the government wants to make the most colossal money grab in history. Get rid of the stuff, make all money electronic and the government of the day can fleece the entire population at the touch of a button. Every time electronic money changes hands, the government will get it's cut. Government a bit short of cash? negative interest rates will fix that up. Be a troublesome person, and an account block reduces anybody to total poverty. Or just a good old-fashioned glitch, or power or internet outage grinds the system to a stop, let alone malicious intent and viruses. It is already happening and just about all governments are looking at abolishing cash, with the possible exception of Somalia.
Ironically this high tech Orwellian nightmare to corral all your money into a shallow pond where it can be speared at will, may lead to a black market where gold and silver make a comeback after a century of neglect. Smart money is already going that way. If I had any money of any description, cash, bitcoin et al, I would do that too.

Mark, it would appear that has already happened, an article in the Times a couple of days ago had a story of a driver who at one of the Sainsbury petrol stations where they are trialling this surge pricing, found that when he reached the till to pay the price had gone, he told them what he thought about it and they refunded him, the future.......