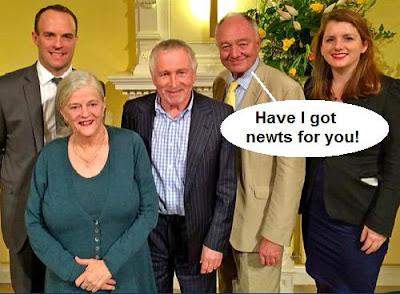 Joking apart, Jeremy Corbyn's objections to nuclear Trident submarines, and his suggestion of non-nuclear missile loads, have some point.

As Ken Livingstone (I know, but bear with me) said on this week's Radio 4 "Any Questions?", the sea is no longer a cloak of invisibility. As David Connett reported in The Independent's Boxing Day issue:

"... a revolution in underwater drones, as well as advances in sonar, satellite and other anti-submarine warfare systems, mean that even totally silent submarines are likely to become detectable. Some sensor technologies can detect large submerged objects by monitoring small movements of surface water."

Defence expert Bryan Clark foresees a change in role, whereby big, manned subs will operate from further back and smaller, drone subs will be deployed up front:

"Submarines will increasingly need to shift from being front-line tactical platforms like aircraft to being host and coordination platforms like aircraft carriers. Large UUVs and other deployed systems that are smaller and less detectable will increasingly be used instead of manned submarines for tactical missions such as coastal intelligence gathering, land attack, or anti-ship missions."

There is indeed scope for serious discussion of Trident, and not just in Labour Party circles.

I heard Livingstone make that point and was surprised to hear him making sense for once. Mind you, even a stopped clock is right twice a day....

It's a fair point but one that only makes sense when dealing with a technologically sophisticated oppponent like Russia, China, or dare I say it, the USA. None of which have the slightest interest in using nuclear bombs against us.

It doesn't hold water when you are being threatened with nuclear blackmail by a state such as Pakistan or North Korea.

Remember that during the Suez Crisis that the communist U.S.S.R. threatened to nuke us if we didn't withdraw from Egypt - to a silent response from the USA who also wanted us to withdraw. That's why France has an independent nuclear deterrent - we learned that when push comes to shove that we can't rely on the American nuclear umbrella, only on our own independent nuclear defence.

Thanks, Wildgoose. But according to Peter Hitchens our nukes are at least partly American-controlled?