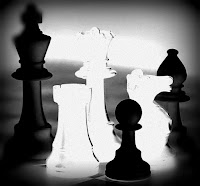 Labour leader Jeremy Corbyn told the crowds gathered in central London for a march against climate change that they had a message for the politicians gathering in Paris for talks next week - "Do what you are sent there to do."
Source

Decades ago I was playing a league chess match somewhere in Coventry, can’t recall exactly where, can’t even recall who I played for.

Anyhow, there came a point where my opponent took one of my pawns with his knight and at the same time threatened my rook. Chess is very psychological; players sit almost head to head and inevitably body language plays its part. My opponent took my pawn with a tiny flourish, clicked the chess clock and sat back with a look of muted but perfectly obvious satisfaction. Unfortunately for him it wasn’t actually a good move.

I ignored the threat on my rook, pushed a centre pawn onto the sixth rank and the game was effectively over. My opponent’s sense of shock was painfully obvious, even more obvious than his satisfaction had been about a minute earlier.

As in chess, so it is in life. There is no going back once a wrong move has been made. Inevitably there are consequences and although the complexities of real life always offer up new opportunities, they are never exactly the ones we had before the wrong move.

Was Jeremy Corbyn’s election a wrong move? Of course it was – the possibilities stemming from a capable Labour leader are gone. Now it is too late because he has to be ousted in some way and that problem is down to another wrong move – Ed Miliband’s changes to the Labour leadership election rules.

Former Labour leader Ed Miliband is facing calls to apologise for the "disastrous" voting system being used to elect his successor.

Mr Miliband changed the system under which he was elected to "one member one vote" and allowed the public to take part for a £3 fee.
Source

There are only so many wrong moves any individual, institution or country can afford to make. The Labour party has made two in quick succession. The sense of shock is still painfully obvious but Labour has lost more than a game of chess and so have we.

It's less than three months since Jeremy Corbyn was elected Labour leader but already newspapers address talk of a "plot" to stage a "coup" within the party.

The i and its sister publication, the Independent, report the calls of four backbenchers for Mr Corbyn to step down, with one saying the party is in a "terrible, terrible mess". Meanwhile, the Times says some senior figures have been consulting lawyers over a way to both unseat him and ensure he cannot be re-elected.
Source

Like the EU, we have to vote and vote again until the right result has been obtained.

obviously I stand to be corrected by anyone with up-to-date knowledge of the Party's rules: but as I recall, the only reason Corbyn got on the ballot paper at all was because Sadiq Kahn, in his infinite wisdom, took pity on him and lent his nomination, as did several other mainstreamers, to 'make a contest of it'

well they wouldn't be doing that again, would they?

Sackers - and oddly enough it seems to work. I would have expected voters to be offended by a second attempt but apparently not.

Nick - that's my reading of it. The problem is the ousting, not the election which would follow because he probably wouldn't be nominated a second time.