Moggyzilla on the UK's energy suicide 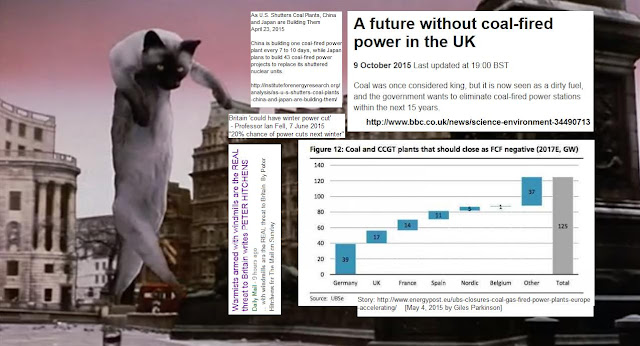 Email ThisBlogThis!Share to TwitterShare to FacebookShare to Pinterest
Labels: Moggyzilla

Thank you. I hope Moggyzilla will become more widely known in the cat fancy.

do need to realise, though, just how overwhelmingly strong a political driver there is to keep the lights on in homes

(when the lights go out, the government goes out - even 3rd-world dictatorships)

from the standpoint of a properly-run whelk-stall, however, things are getting pretty dire; two years from now we might be into negative capacity margins

I looked at the Hitchens article and, as usual, he misses the obvious point which is how and why we have become so reliant on electricity and the stupidity (or is it laziness?) of such reliance. Just think for a moment about two recent news stories - TalkTalk being hacked and users' financial secrets being 'borrowed' and we hear that Sweden will shortly become a cashless society. Do I need to spell out the implications of those two things?

The other name I spotted in your collage was Ian Fells. He has been shouting about energy conservation for years and years but nobody listens.

The other thing about coal, which the NUM has always pointed out, is that with coal we are energy independent, not relying on Russian gas or Arab oil etc. Ted Heath didn't understand this and neither did Thatcher (or maybe they had vested interests whispering in their ears) Too late now because all our current and future power generation is in the hands of foreign companies, mostly state owned too. Oh, the irony of that! "State owned bad, privately owned good" - wasn't that Thatcher's mantra?

As for coal being a 'dirty' fuel; well, is it? Whatever happened to Jacob Bronowski's research into clean coal during his time at the NCB? And why is not more use made of 'gas scrubbers' which clean up industrial exhaust fumes? Just as an example, Statoil use such technology in the NorthSea to extract CO2 from their extracted gas and pump that CO2 back into the original gas reservoir deep underground.

I could go on of course but I can't be bothered. Nobody appears to be capable of thinking these days, it has been educated out of people.

You will be familiar with the phrase "Coals to Newcastle" meaning to do something meaningless.
Unfortunately it has come to pass!
My brother mentioned a couple of months ago that a ship had just unloaded tons and tons of coal at Tyne Dock.
"What? unloaded?" - was my response.
It turns out to be true, we have been importing coal from Poland, Colombia, USA and other places for years.
This story from 2011-
"....it is the volume of imported coal, which has increased dramatically from zero in 2003 to 3 million tonnes in 2008, that has earned the Port its place as the UK's fourth largest coal importer."

Truly, we are governed by imbeciles!

The idiocy of the current long running energy policy will come to haunt all those who instigated and supported it.

From Camerons "we will be the greenest government ever" spout following on from the ridiculous Climate Change Act we have Milliband E to thank for, we then had the Conservative govt putting the energy and climate change dept in the hands of the green numpties in the Lib dumbs, thanks to total stupidity on the part of all involved reached the point where not only are we importing coal but we are importing wood pellets to run a coal fired power station that produce more CO2 than the coal did by the boat load from Canada, how very green !

Still they talk of windmills producing x power when all depends on the wind blowing and it rarely does when it is really cold and reaching targets that are unachievable without paralell back up that now doesn't exist.

From all this the only achievement are ever increasing banks of polluting diesel generators ready for the day the lights go out, after all why else would they be there, imbeciles is being polite.

Thank you for your comment, Wiggia, with which energy experts and Peter Hitchens (see today's post, near the end) would heartily agree.