Gosh, people get fussed when you suggest that complete licence isn't a good idea. Where did that start? Apparently I'm a 95-year-old reactionary, and a 21-year-old "righteous" (same accuser).

In 1969, I went to Cambridge University for an interview, and met my friend who'd just gone up. In general conversation, he told me that a third of the undergraduates at his college were Old Etonians, and that they were (a) a tight clique and (b) well into cocaine parties. This, at a time when I'd only recently heard of "pot", which for me conjured up the mental image of a Marmite jar.
That's 40 years ago now, just about. Eton was criticised a few years ago for taking a tough line on drugs. Wrong issue: their critics should have asked them just how long the problem had existed. What was going on in the study and the common room? Just don't ask Dave. 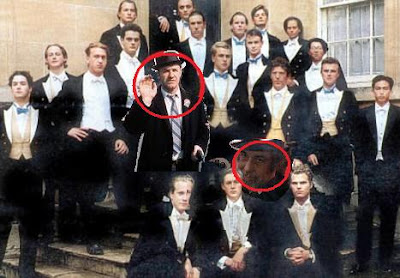 'Gosh, people get fussed when you suggest that complete licence isn't a good idea.' Oh dear, a little sensitive for a blogger S, eh?

No, I don't advocate complete licence. However, I do believe that Gt Aunt Maud, or any eighteen year-old, should be allowed to have a sherry aperitif or whisky night-cap (to excess if they want). However, if they eschew the demon drink they can have a joint – you know, for their joint pains.

If drugs are bad, m'kay: then let's ban doctors from prescribing any mind/mood altering drugs (as they were banned from prescribing heroin in the late 1960's) and see how society deals with the consequences. After all, I don't take them (or illegal substances) so why should your Mum, Dad, Wife, Brother, Sister (if any of them do) or colleague need them to cope with the rigours of life. Would save the NHS a fortune too.

So, while many are floating on a raft of credit card debt and a cloud of tamazepam, let's imprison those that enjoy a recreational toke. Yea, that'll really solve the country's problems.

I've enjoyed reading your blog these past 4/5 months and found you articulate, educative and informative whilst dealing with the greedy bankers, but let's leave the “Drugs are Bad, M'kay” for the classroom.

It hasn't seemed to do any harm to the Eton lots careers...

Rather shot your own argument in the foot there.

"I'm choosing for you" is the opposite of libertarianism.

Let's see now: The Etonians are traditionally considered the best and brightest, of the best families, prepared by the best tutors, etc. This especially the case forty years ago.

Do your readers understand the implications of this story? These kids, groomed to lead their society in all its fields of endeavor, were deep into cocaine use.

Drug use is a vice, not just because it damages the mind and body, but because it is symptomatic of profound the selfish irresponsibility of the user.

Forty years on, here we all are! Can we say these kids were good stewards of the society handed off to them after school?

And not just picking on the Oxbridgeans and Etonians, mind you.
Our kids in the US Ivy League schools were competing with yours in this field. Anyone who objected was considered hopelessly repressive, facist even.

Maybe, just maybe, those who objected then, and now, may have a real point?

Alec: I was saying the libs are sensitive! And if drug education stays in the classroom, it may as well not be there. For more, please see my reply to Devil's Kitchen in the previous post.

ACO: "It hasn't seemed to do any harm to the Eton lots careers..." As GBS said, "Take great care to be well born." It's not what drugs did to them, it's what they did and are doing, influential as they are, to promote drugs. In disease terms, the educational facilities of the privileged acted as a powerful vector, or now they have open and secret supporters in all the vital organs of our culture. Being privileged, they have systems of support that will help them when the lower classes who ape their behaviour simply drop through the oubliette. To turn around your "I'm choosing for you", the example you set for others is a form of choosing for them - see DK and my reply in the previous post.

Old South: I was there, though pretty much on the outside, and it's interesting to reflect how, for all our brains and learning, we acted mostly from the herd instinct.

It concerns me less that drug taking is commonplace at Cambridge than it does that Eton is still the place to send your kids if you want them to get top jobs.

It is still true in this country that no matter how much of a duffer your brat is, if you send him to Eton he is guaranteed a top job for life. No surprise that these empty vessels fill up their meaningless days created by hand by their parents with recreational drug abuse. What else do they have to give their lives any kind of sense when all of it has already been mapped out by a top public school?

If we are foolish enough to elect these empty vessels to top office, and to continue to allow them to run the civil service, then we only have ourselves to blame for Britain gradually running itself into the dirt.

Cocaine use is only a symptom of the vaccuosness of these people's existence.

I an one of those in favour of legalization and taxation, and have never been a user, so have no axe to grind. I do know that the experiments tried in Liverpool and Zurich were scientific successes - only addicts were given the drugs, they couldn't sell them, and the associated crime went away. The physical toll of heroin and cocaine is known to be less than advertised, provided that the drugs are clean. And, those drugs are dirt cheap. The social costs that Sackerson mentions are something else. I wish that addicts would make the right decision not to breed, but that isn't going to happen.

It doesn't bother me that the inner city poor use drugs. In the US, their life expectancy can be very short, and they have no hope. It really bothers me when the upper and middle-class kids do so out of boredom.

However, every society has had its choice of addiction, usually by the young men without hope. Think of gin alley, opium dens, the bars in South Africa, pubs in Ireland, the Afghanis stoned on marijuana. It beats the choice in Gaza, to strap explosives on your chest.

Can nothing be done for (or by) the inner city poor? Don't drugs and alcohol fix them in their hopelessness - pickle them?