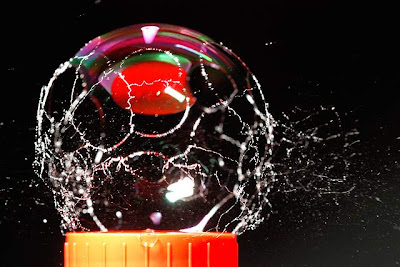 A bubble shot through by a bullet - experiment described here

Here's a counter-blast to gold-bugs and fans of other metals:
In this long and dense presentation to the World Bank, delivered in April 2007 and revised/updated in July, Frank Veneroso says that commodities, including gold, nickel and copper, are already in a big bubble. He thinks an estimated $2 trillion in hedge funds, plus leveraging, is pumping the prices:
When it comes to metals, we see hedge fund speculation, hoarding and squeezing everywhere. Not only have some metals markets been driven far, far higher in this cycle compared to all past cycles; we see the same phenomenon across all metals. It is the combination of both the amplitude and breadth of the metals bubble that probably makes it the biggest speculation to the point of manipulation in the history of commodities. (Page 50)
Short runs costs have risen, but not long run costs. New sources are being exploited. And if recession hits, demand will drop:
... the historical pattern... for all commodities, suggests that, rather than seeing well above trend metals demand growth in the years to come as the consensus now projects, we are more likely to see outright declines in global demand for these metals as demand destruction takes hold. (Page 56)
For institutional investors, the "barren breed of metal" is unproductive compared to other assets:
... it is likely that the net nominal return to portfolios from investing in physical “stuff” has not been more than 1% per annum. By contrast, in a 3% inflation environment, bonds have yielded somewhere between 5% and 9% and equities have yielded somewhere between 8% and 11%. In effect, you gave up an immense amount of yield if you diversified out of bonds and stocks into commodities. You did gain by reducing overall portfolio volatility, but that gain was not large enough to offset the loss in yield. Diversifying with “stuff” did not enhance risk-adjusted returns. (Page 57)
So prices have been boosted by the futures market. And commodities as a market are small enough to be susceptible to "manipulation and collusion".
Readers of this blog will recall that Marc Faber recently said he saw bubbles everywhere, including commodities. Even if cash isn't king, it may be a pretender to the throne.