A letter to Larry Elliott

Sent today by post - am I wasting my time again?

Like yourself, I am concerned at the fate of ordinary people in the hands of the “New Olympians”, as you correctly call them. Unfortunately, the people now seem likely to elect a fresh government on the basis of a big lie, namely that New Labour inherited a thriving economy and threw away a golden opportunity. But I don’t see anyone in the electronic or print media nailing the lie. Will you help do this?

If you accept the monetarist analysis, politicians of both stripes have been goosing the economy since the early Seventies to get a feelgood factor in time for re-election. Banks (permitted / encouraged by politicians) have been lending money faster into the economy than the economy was growing.

It’s quite easy to show this from Bank of England online money supply stats (available from 1963 on) and official figures for GDP. I charted the relationship recently like this:

The result was a series of bubbles in asset prices, even though GDP growth has been trending downward since the mid 1970s. Now, and for decades ahead of us, we’ll be paying the price, because we can’t increase debt forever.

Politicians might argue in their defence that they didn’t know – remember, Keith Joseph had to explain monetarist principles to Margaret Thatcher after she became PM – but both Thatcher and Major were familiar with monetarism by the Nineties, as, one assumes, were the Opposition. New Labour inherited a debt-fuelled boom in stock and real estate prices, one that was bound to end in a bust at some time. True, they didn’t fix the Quattro, but they weren’t the ones who fired it up. Now the engine’s burning out.

The record of the last Conservative government is far worse than New Labour’s: from 1979 to 1990 (when the economy had one of its heart attacks because of the unhealthy diet of financial additives), GDP grew annually by an average of 8% or so, but M4 by 19% p.a., a difference of 11% p.a. - compound. The New Labour years have seen something like 5% GDP growth and 10% M4 growth p.a., in other words a discrepancy of only half that experienced during the boom years of the 1980s.

But it’s been going on for longer than that. In 1972, UK M4 increased by 35% (see spike on graph) – and 17% the year before - so it’s quite possible that the OPEC oil price hike was not merely (or mainly) revenge for the Six Day War etc but a repricing in anticipation of the consequent devaluation of the pound and dollar. Then we got inflation, the IMF (who, it is rumoured, demanded the resignation of Harold Wilson as a precondition of their assistance), retrenchment and recession under Callaghan, the Winter of Discontent and finally the Tories with their phony, but spectacular, recovery.

You’ll have gathered that although I don’t hold any brief for the Conservatives, I feel the same way about recent Labour governments too. But I’m darned if I’ll let the next lot be swept in on a tidal wave of misrepresentation, assisted by a news media that has largely nailed its colours to their mast. All that means is that the lessons will not be learned and the crooked game will, essentially, continue.

Except that it can’t, not indefinitely. Another clear implication of the M4-to-GDP correlation is that as the debt increases, GDP slows. There’s a number of people now saying that Western economies are approaching the point where additional debt will actually cause GDP to shrink – see this graph from Nathan Martin, for example: 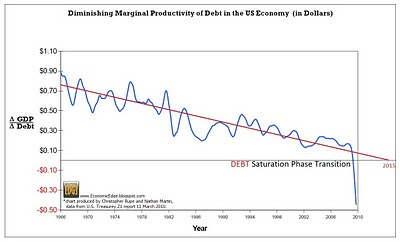 This isn’t just wild blogger stuff – see the work of Australian economist Steve Keen, one of perhaps only 12 professional economists in the world who predicted the credit crunch. Keen explains that classical economics ignores debt, which is why 20,000 economists didn’t see the truck coming.

Can you, are you prepared to, get the people to see what’s going on before they cast their votes?

Sovereign debt is already starting to cross the danger threshold in the United States, Japan, Britain, and most of Western Europe, threatening to set off a bond crisis at the heart of the global economy.