My news aggregator has picked up news of a startling new discovery, though I fear some details may have been scrambled during transmission:
There is a giant financial black hole at the centre of our finances, a study has confirmed.
Austrian cashtronomers tracked the movement of dozens of banks circling the centres of Western economies.
The black hole in each is the equivalent of four million jobs.
Black holes are obligations whose interest is so great that nothing - including charismatic political leaders - can escape them.
According to experts, the results suggest that thriving economies form around giant debts in the way that a pearl forms around grit.
Treasury ministers on both sides of the Atlantic say that there is no reason to be concerned: provided enough cash is directed into the black holes, they will fill up and the economy will continue to revolve as normal. 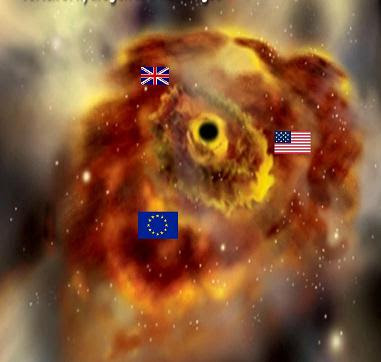 From the inside of the event horizon, it appears to last forever.