Transparency International’s global Corruption Perceptions Index (CPI) 2008, launched today, shows a significant worsening of the way the UK’s attitude to corruption is seen in the world. The UK’s score has dropped from 8.4 last year to only 7.7 today: the first time it has ever fallen from the high rating of more than 8 (10 is the highest a country can score on the Index).

The UK's engrained complacency over its failure to take international corruption seriously is now further exposed to public scrutiny. The UK has a wretched foreign bribery prosecution record compared to most of its G7 peers. It was strongly criticised this summer by the OECD body responsible for ensuring that members comply with the 1997 OECD Anti-Bribery Convention and may now face tougher measures by the OECD if it continues to fail. 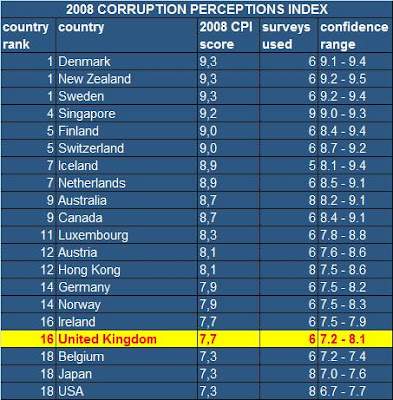 BTW: Zimbabwe is not even in the bottom 10 of the list.

Zimbabwe isn't in the bottom 10 because it has a government in name only.