You may have missed it, but Google’s slogan ‘Don’t Be Evil’ was airbrushed out over three years ago https://gizmodo.com/google-removes-nearly-all-mentions-of-dont-be-evil-from-1826153393 . I can’t say whether this more lenient attitude to Old Scratch has anything to do with its corporate parent Alphabet being partly owned by investment house Blackrock https://www.investopedia.com/articles/markets/011516/top-5-google-shareholders-goog.asp , which has ambitions in China https://www.aljazeera.com/economy/2021/9/8/blackrock-raises-1bn-for-its-maiden-for-the-chinese-market , as does another Alphabet shareholder, Vanguard https://www.cnbc.com/2021/03/18/vanguard-gave-up-on-mutual-funds-in-china-but-working-with-ant.html . In any case, and especially now that public opinion is being nudged against China, we should remember that the Middle Kingdom is hardly the head shed of lies and wickedness; our own governments manage very well without their help.

What concerns me is the growing tendency of mainstream Western news media - including much of the social media and internet platforms - towards distortion and suppression, something for which we used to laugh at Russia’s ‘Pravda’ (Truth) and ‘Izvestiya’ (News). As with the supposedly uniquely oppressive Communist regimes, the liberal-democracy corporate approach to ‘don’t be evil’ is to change that to ‘be evil, but don’t let the public find out; and if they do, woe betide the whistleblower.’ We saw that with Daniel Ellsberg and ‘The Pentagon Papers;’ we saw it with Julian Assange’s Wikileaks and the Apache helicopter ‘Collateral Murder’ in Iraq https://collateralmurder.wikileaks.org/ .

In Assange’s case, Yahoo! News shows how far the authorities are prepared to go https://news.yahoo.com/kidnapping-assassination-and-a-london-shoot-out-inside-the-ci-as-secret-war-plans-against-wiki-leaks-090057786.html . An especially outrageous detail of the CIA’s 2017 plans to intercept the transfer of the Australian journalist from the Ecuadorian Embassy to Russia and kill him on British soil, is the UK government’s willingness to become directly involved:

‘Those included potential gun battles with Kremlin operatives on the streets of London, crashing a car into a Russian diplomatic vehicle transporting Assange and then grabbing him, and shooting out the tires of a Russian plane carrying Assange before it could take off for Moscow. (U.S. officials asked their British counterparts to do the shooting if gunfire was required, and the British agreed, according to a former senior administration official.)’

I wonder how such an incident would have been covered in the British news.

So far, so bad; but it’s the news treatment after Yahoo!’s that deepens one’s concern. For a start, the online BBC News seems to have remained silent – except for their Somali-language edition, as Media Lens tweeted:  https://twitter.com/medialens/status/1443626585916121089 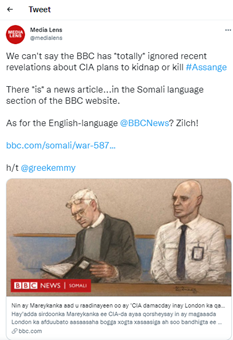 I happened upon this tale via a Facebook group and followed through to the BBC – you’ll see that the search address line includes a tell-tale, showing how you got to that page https://www.bbc.com/somali/war-58709505?fbclid=IwAR1T3Brt_mcHO8GLuMgjHn65F7Ywou_my1dpE55ccMBRrBvL3l8nDooTrg0 . This gave me access to the Somali-language version, so as a Google Chrome user I clicked Google’s ‘Translate this page’ icon at top right, and it got even weirder:

Oh, yeah? When I highlighted and copied the text and pasted it into the Google Translate app it managed just fine. In fact, if you try the link yourself now it will translate to English – but it didn’t then. So I surmise (who’s going to tell me the pravda?)  that Google temporarily suppressed the translation but gave up as the internet rumour spread.

Maybe. After all, Facebook has now announced it will ‘begin removing content questioning any approved medical vaccine, not just those for Covid-19’ https://www.bloomberg.com/news/articles/2021-09-29/youtube-will-remove-videos-with-misinformation-about-any-vaccine , so the 1984 memory hole has widened into a mineshaft. The omniscient webmasters at Facebook and Google know the truth exactly and infallibly, whether on medicine or politics; trust them!

This time, some of the izvestiya leaked; but soon, as their algorithms get even smarter, we may not get to hear the rumours.

And in response, a significant number of Americans and British believe a whole crapload of pure fiction from the internet.

I'm talking about political suppression of the truth, here; and blanket censorship. At least in the days of the dead tree press, independent newspapers could reach their audience; what we have now is a near-monopoly on communication.

Censorship also involves ignoring content news. If you know not, how can you react? The real news is hidden from us or given to us in an adulterated form.

Political suppression of the truth is to be expected. Blanket censorship is invisible if done right.

What do we have? A newspaper not worth reading and an internet not worth viewing.

The only trouble is half of the voters have no idea that this is even going on All we can do is be frustrated by their inability to observe their surroundings.