It would take a genius to invent a business that didn't involve blood, filth or heavy lifting; where any failure is down to the customer; and there is no end to the process, so the income stream is permanent. We should all salute Sigmund Freud's towering achievement.

But it has occurred to me that some of his theories are not about the indvidual's suffering; he may have been a crypto-revolutionary.

Ostensibly, according to his schematic below, humans go through five stages: 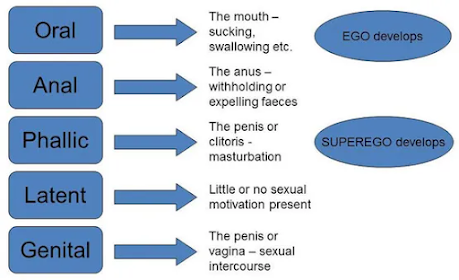 Until I saw it, I thought it was just the first three. Something like, the infant eats for the first five years and then there is a cataclysmic poo, followed by discovering a form of amusement that lasts until retirement age or if lucky, even longer.

Oral: the lower orders suck on the welfare breast

Phallic: the elites f*** everybody else, especially the poor

- and the next two are the stages leading to revolution:

Latent: the people are oppressed and passive, unable to escape from the mire of debt, politically impotent, distracted by cheapjack entertainment, drugs and alcohol etc.

Genital: the greed and power-madness of the few finally f*** the whole system. A few survivors - unlikely to include the bunker billionaires, whose exits and air vents will have been concreted up by their vengeful victims - fossick through the wreckage for the means of survival.

Or maybe I've got all that wrong. That's the danger of the internet, it makes us all sciolists.

A little learning is a dangerous thing
Drink deep, or taste not the Pierian spring
There shallow draughts intoxicate the brain
And drinking largely sobers us again.

A word for the day, 'fossick'.

You forgot your tagline.

As for the essay itself, there are lots of professions which involve little mess or work and lots of dosh: seers, astrologers, economists, self-help gurus, doctors of old, shamans, priests. Just read Leviticus, and note the choice cuts of meat to be burned on the alter.

Of your list, Freud managed to put himself in the respectability rank of economists. Seen Mel Brooks' 'High Anxiety'?

I have indeed seen it. It is about 5th in my favourite list for Mel Brooks, after 'Young Frankenstein', 'Blazing Saddles', 'Silent Movie' and "Spaceballs'.

I liked sciolist as well