A share-owning democracy, or socialism?

If I understand the drift of Margaret Thatcher’s vision for the United Kingdom, it was one where the ordinary person might eventually own the house they lived in, instead of paying rent forever; and own shares so that they could have some of the benefits of capitalism, instead of seeing themselves as serfs working for ever-wealthier bosses.

If the project works, it destroys the socialist ‘take all and provide for all’ model; but if it fails, how many might opt for shabby security over potentially ruinous freedom? The jury is still out, but I dread the verdict.

The stock market has become a rollercoaster in recent years. Here is a graph of selected days – the high of the tech boom of the ‘90s, the low points of 2003 and 2009, and where we are now. To give some idea of ‘real terms’ I also supply the figures adjusted by the official RPI index https://www.ons.gov.uk/economy/inflationandpriceindices/timeseries/cdko/mm23 (June’s market close is deflated by May’s RPI, the latest available): 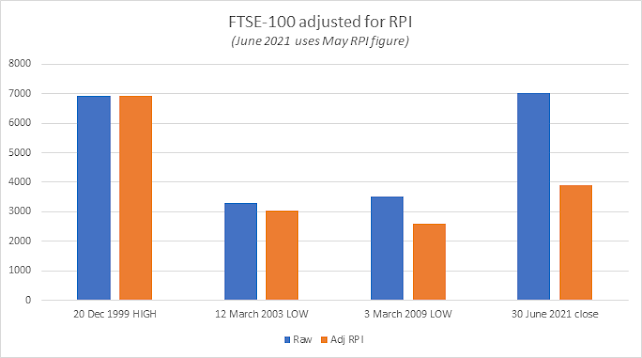 As you see, the magic 7,000 figure around which the market is now circling – above the historic high point of 6,930.2 on 20 December 1999 – is actually worth about half what it was then. Yes, you might do better by picking particular stocks or funds, but yesterday’s star could be today’s dog, as for example we see in the legal-vulture-besieged Neil Woodford https://www.ft.com/content/2f077ae2-f19e-11e9-bfa4-b25f11f42901 . At least with Prince Ras Monolulu’s racing tips https://www.bbc.co.uk/sport/horse-racing/54695641 you got a result the same day.

Most people aren’t gamblers, at least not with their life savings, which is why they used to like with-profits funds, getting an annual statement from the insurance company to say how much their holding had grown since the year before. However such funds found it difficult to cope with the volatility of the last decades, sometimes having to impose ‘market value adjustments’ to stop investors running away en masse in a bad year.

The uncertainty is compounded by what’s happened in the bond market. The unimaginable levels of debt in our system have forced the government to drop interest rates to near zero; when a personal pension plan holder wants to retire with an annuity, it has to be secured with bond investments on which the annual yield is now pitiful, so that one needs a far larger fund to get the same income. The alternative is to leave one’s pension investment in equities, with their associated risk.

This dilemma was not anticipated in the good old days, when (for example) Equitable Life https://en.wikipedia.org/wiki/The_Equitable_Life_Assurance_Society sold pensions with a Guaranteed Annuity Rate at retirement age of up to 12 per cent. When EL were caught out by the rates collapse at pay-out time they tried to reduce the investors’ fund value to compensate, but the court ruled that out; hinc illae lacrimae https://www.latin-is-simple.com/en/vocabulary/phrase/749/ .

The investment boom of the 1980s lit expectations that were fanned by regulators. It’s understandable in a way – there were cases of maturing mortgage endowment plans that yielded six times their target value – but only if you think good times go on for ever. At one point the illustrated yearly growth on pension funds was in the bracket 8.5 – 13 per cent. However by the beginning of the 90s even the best funds run for our insurance company weren’t showing anything like that higher figure.

As with so many issues, instead of looking for cat-stroking villains we need to understand that the roots of our problems are systemic. Britain threw away the wealth of generations in two world wars with a great depression in between – there was no Roaring Twenties here. Post World War Two America – seizing the chance to finish off the British Empire - turned off the financial tap to us even as it poured money into western Europe to rebuild it and prevent an outbreak of communism. The terms on which we joined the EU withered many of our industries for over forty years. Meanwhile the Third World gained our technological know-how and exploited it with desperate urgency as only the poor can – one company I used to advise specialised in exporting large machine tools from our closing factories. Is it a surprise that money-making seems to centre around housebuilding these days, rather than industry? It is as though Stone Age men could eschew hunting in favour of selling each other caves.

Well, now we’re out of the EU, though it seems that like jilted lovers they still try to make as much trouble as possible; but there’s no going back to the status quo ante; it’s a different world now. Although it’s nice to hear a PM who makes optimistic noises, we’re already seeing that ‘free trade’ is not an unmixed blessing; we have exchanged the mini-globalism of Europe for the maxi-globalism that has done so much for the multinationals but whose benefits have not really trickled down to the rest of us. If we really are de-industrialising and also turning expensively and erratically green in various ways, how are we going to support our over-large population, especially when we are still expanding it with further influxes of people?

We are long overdue a consideration of how to cut our coat according to the cloth we still have; otherwise people will start to contemplate a different system.