Joe Brown and vertigo, by Wiggia 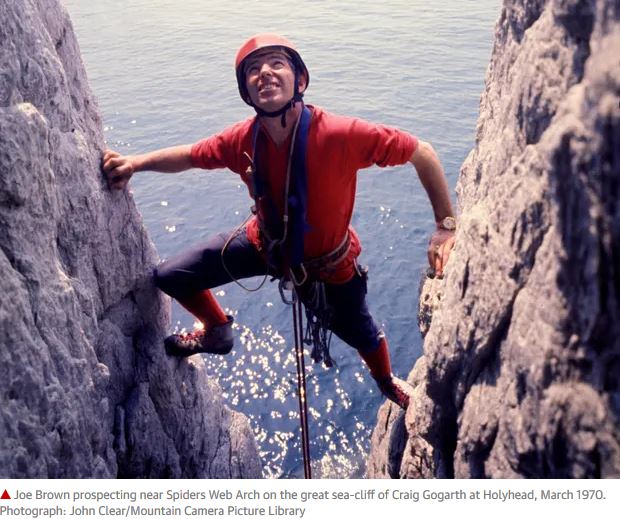 I have always suffered to a degree from vertigo. My earliest recollection of that stomach churning fear was as a child on a family outing visiting Beachy Head. As with all kids we rushed to the edge to see what all the fuss was about and on reaching that edge and looking over a strange feeling came over me, aided by a slight breeze that in my mind threatened to tip me over; I retreated post haste. That stayed with me all through my life.

I have if you like, a selective form of vertigo: planes, helicopters, gliders have absolutely no effect. It is the sheer drop that does it: a ladder can only be climbed so far, and glass floors on tall buildings are a no-no - a trip to Florence years back and the climb to the top of the Duomo was fine until I emerged on that small rotunda at the top and saw the roof falling away in front of me. Those are the areas that instil that stomach-churning.

Over the years I have improved. Restoration projects with houses have helped: ladders can now be climbed with a new-found confidence, scaffolding holds no terrors at two stories; but the rest remains. What triggered such a mental state I have no idea, perhaps it was that visit to Beachy Head, I can think of nothing else at that time of my life that would have induced that fear.

All the above brings me to someone who if the vertigo had not existed I probably would not have taken much interest in. The announcement of the death of Joe Brown the climber this week at the age of 89 was one of those ‘I had no idea he was still alive ‘ moments, so far removed from my life was his, yet in many ways my interest in this pioneer of rock climbing and later mountaineering was brought about by my vertigo. Pictures of “The Human Fly” as he was known gave me a sense of wonder that anyone could actually do what he did, he was the first besides the conquerors of Everest and almost the last to gain wider public acknowledgement for what was to most an obscure pastime.

Everest was of course much boosted in the public eye by the conquest being announced on the coronation of Elizabeth 11 and will always be associated with that event.

In many ways Joe Brown was, to quote a more modern phrase, an original working class hero, a Manchester boy raised by his mother a cleaner in a Manchester slum area after his father at sea with the Merchant Navy was injured and died of a gangrenous wound. He shared the house with six siblings. An adventurous child by nature who didn’t like team sports or school either, he walked in the Peak District and that is where the climbing started, ascending a sheer 60 foot slope with the aid of his mother's clothes line.

His climbs in the ‘50s were what brought him to prominence in the public eye. Many were first-time climbs and the craze started with him at the forefront of the movement outdoors.

Mountaineering was the preserve of the more wealthy and his invitation to join the team to climb Kanchenjunga was, as he said later, like winning the lottery. Although he could climb and be safe in the mountains his alpine side was very restricted, yet on May the 25th 1955 he and George Band made it for the first time to the top - he did not stand on the very top out of respect for the local elders, who said the Gods would be angry if they stood at the very top.

I remember well the televised climb in ‘67 of the Old Man of Hoy, a stack in the Orkneys; 15 million watched him climb. He made several other documentaries of his climbs. Asked by many to join other Himalayan expeditions, in 1956 he did climb the hitherto unconquered Muztagh Tower in the Karakorum; this was considered to be a remarkable feat ranking with Kanchenjunga, but he preferred a more varied life with climbing and did not follow up.

Never one to hog the limelight, he started a climbing school and eventually settled down to a climbing shop in Snowdonia. He genuinely loved his climbing for the climbing alone, he did not like the publicity of his OBE and wished it had been slipped to him in a brown paper envelope, and his climbing was summed up by his quote “I climb for the pleasure of climbing, You don’t need to plant a flag”.

I know nothing of climbing other than my fascination as to how they could actually do what they do, but without my vertigo I would never have given it a second glance, so I do have something to thank it for.

I even got a feeling of vertigo in a pub by the huge Cardington Airship Hangars, where they had some balloons very high up, so as I was on the ground, it was a sort of 'reverse experience'...

And, I used to work for a roofing firm, and one day, knowing there was an issue with a roof element, just rushed up the ladder to investigate!

Coming down wasn't quite so easy...

My relationship with vertigo is similar to yours. I find it wierd.